This is the second time in a few months that the Howard government has embarked on a dirty tricks campaign to destabilise a neighbouring government. Just three months ago, East Timor’s prime minister, Mari Alkatiri, was forced to resign on June 26 and the former foreign minister, Jose Ramos-Horta, who made no secret of his sympathies for the US and Australia, was installed in his place. 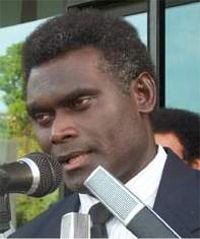 The second time in a few months

The Australian government’s push for “regime change” in the small Pacific state of Solomon Islands has struck unexpectedly defiant opposition from the man it is seeking to oust, Prime Minister Manasseh Sogavare.

Sogavare made a national radio broadcast on Sunday night to explain why he had expelled the Australian High Commissioner Patrick Cole. He accused not only Cole, but the Howard government, of infringing the Solomons’ sovereignty through “political manipulation” and “the use of development aid and political force as leverage to dictate Australia’s involvement”.

Sogavare warned that Canberra’s “bullying” was creating “animosity” that would generate further serious unrest. “The government and the people of the Solomon Islands are concerned about the manner in which the Howard government has continued to subtly dictate the sovereign issues that are beyond the jurisdiction of Canberra.”

The prime minister said the Howard government had “actively tried to impede” a lawfully constituted Commission of Inquiry into the causes of the April 18-19 riots in the capital Honiara. “While preaching good governance and accountability,” the Australian government had violated the rule of law, “raising questions about Australia’s agenda in Solomon Islands”.

Sogavare denounced both the Australian government and media for alleging that he had established the inquiry to interfere with the trials of two members of his government, East Honiara MP Charles Dausabea and Central Honiara MP Nelson Ne’e, who were arrested and refused bail on charges of inciting the riots. Sogavare pointed out that a Solomons High Court judge, appointed by Australia, had dismissed a legal challenge to the inquiry, declaring there was no evidence of any “contempt” by the Sogavare government in initiating it.

The April disturbances were fuelled by deepening resentment toward Australia’s neo-colonial takeover of the country in 2003 through the Australian-dominated Regional Assistance Mission to Solomon Islands (RAMSI), which has taken control of the country’s key institutions, including the police, courts, prisons, finance department and economic planning.

The immediate spark for the riots was a RAMSI military and police mobilisation to prop up Sogavare’s predecessor, Snyder Rini. Hundreds of Australian troops and federal police surrounded the parliament building, as MPs elected Rini as prime minister, even though the previous pro-RAMSI government, in which Rini had been deputy prime minister, had just been defeated at a general election.

The unrest ended in the wholesale looting and burning of hotels, businesses and offices, mostly in Honiara’s Chinatown. The Howard government immediately dispatched 400 more troops to reinforce RAMSI. Nevertheless, Rini’s position became untenable. He resigned within days and Sogavare, who had called for a RAMSI “exit strategy,” was elected.

In Sunday night’s address to the nation, Sogavare bluntly criticised RAMSI’s “aid programs,” saying, “the majority of financial assistance provided to Solomon Islands is repatriated back into the Australian economy through extravagant salary packages maintained by all expatriate personnel which is paid directly into foreign accounts”.

Moreover, “the negative effect of the increased aid to Solomon Islands to support expatriates directly engaged in the various arms of the government is seen in the rental market, which disproportionately increased the rentals of houses in Honiara.” This, he said, “has the effect of locking out Solomon Islanders”.

Sogavare went on to declare that RAMSI’s focus on “presence of arms by force” had failed to address pressing social and economic problems and would create “an environment that will breed hatred among Solomon Islanders in the future”.

He denounced the “much-publicised attack” on the integrity of former Australian Federal Court judge Marcus Einfeld, who had been appointed to chair the riots inquiry. Sogavare noted that the discrediting of Einfeld, ostensibly launched over an unpaid speeding ticket, only began after the judge took up his Solomons’ post.

“It is interesting to note that no scrutinising of Marcus Einfeld’s background was conducted while he was a Federal and Supreme Court Judge of Australia or before receiving his OBE and most valuable Australian awards”. Sogavare concluded: “This is an example of what happens to anybody who does not comply with Australian government demands, which now includes the sovereign government of Solomon Islands”.

Sogavare revealed that he had initially asked “discreetly and in accordance with proper protocols” for Cole’s withdrawal as Australian High Commissioner, but Prime Minister Howard refused to “even discuss the matter except to imply that there would be serious consequences if such action was taken”. In other words Howard, not Sogavare, was responsible for the public confrontation.

The ongoing operation by the Australian government and media to demonise Sogavare was stepped up following his speech. Monday saw the leaking of a June 19 cabinet memo, in which Sogavare raised concerns about the arrest and trial of Dausabea and Ne’e, and the possibility of “collusion” between Australian-appointed prosecutors and judges.

“According to reliable sources, the arrest and charges laid against the two MPs may have been politically motivated and influenced by the long standing desire of the system to arrest and convict them, especially the MP for East Honiara,” Sogavare wrote. “Moreover, what is more surprising is that of the thousands of people who illegally stormed the parliament building on 18 April and continued on to Chinatown on a looting and burning spree, only the two MPs were arrested and charged.”

The memo raised legitimate questions about the political motivations behind the jailing of the pair. Why, indeed, were the two MPs—who had both publicly criticised RAMSI—singled out for arrest? As for “collusion”, RAMSI police, prosecutors and magistrates carried out the formalities, sidelining the Solomons authorities. At the height of the political crisis produced by Rini’s election, it was RAMSI officers who arrested the MPs at gunpoint, with little apparent evidence.

Nevertheless, Opposition leader Fred Fono, who has publicly aligned himself with Australia, immediately claimed that the leaked document showed that Sogavare was trying to thwart the proceedings against the two MPs because they would implicate him in instigating the riots.

Fono offered no evidence to back his allegation, yet it was immediately seized upon by the Australian media as proof of Sogavare’s guilt. “Sogavare ‘provoked Honiara riots’,” read the headline in Tuesday’s Australian, followed by the opening sentence: “Solomon Islands Prime Minister Manasseh Sogavare was directly involved in provoking riots in Honiara in April.” Similar reports were splashed in Rupert Murdoch’s tabloids around Australia while Australian Broadcasting Corporation (ABC) correspondent Steve Marshall breathlessly reported from Honiara: “A little birdie has told me that the reason why Mr Sogavare might want to get these two MPs out of jail is that they might implicate the prime minister in the riots themselves.”

In an interview with Marshall, Fono “very confidently” predicted that the cabinet document would bring about Sogavare’s downfall. Fono forecast that many members of Sogavare’s unstable five-party coalition would now back his proposed no-confidence motion, tabled in parliament for October 2, and that Deputy Prime Minister Job Dudley Tausinga would quit in order to contest the leadership.

By Monday evening, the ABC was reporting that “a political mutiny is unfolding in the Solomon Islands” after Sogavare “created a storm last night when he criticised Australia’s aid mission to the nation”.

On the same day, Howard reiterated his refusal to accept Cole’s expulsion, declaring that no replacement would be appointed. In a thinly veiled threat of further retaliation, the Australian prime minister said his government would “work through” its differences with the Solomon Islands. It has already cancelled Solomons MPs’ visa rights to enter Australia in an obvious bid to swing MPs behind Fono’s no-confidence motion.

The next morning, the New Zealand Labor government unequivocally lined up behind Howard. Foreign Minister Winston Peters said he had rejected a plea from Sogavare to mediate in the dispute. Peters emphasised that New Zealand, a junior partner in RAMSI, “worked closely” with Australia. “There is no gap between our desires in the Solomons or East Timor in terms of sound governance and future peace and security.”

This is the second time in a few months that the Howard government has embarked on a dirty tricks campaign to destabilise a neighbouring government. Just three months ago, East Timor’s prime minister, Mari Alkatiri, was forced to resign on June 26 and the former foreign minister, Jose Ramos-Horta, who made no secret of his sympathies for the US and Australia, was installed in his place.

A familiar pattern is emerging in the Solomons. Howard has openly expressed dissatisfaction with Sogavare’s government, and the mass media, led by Murdoch’s outlets and the ABC, have set about demonising him via various unsubstantiated allegations that could rapidly see criminal charges being laid against him.

For his part, Sogavare is appealing for support from other foreign quarters, including Taiwan, Cuba and Venezuela. This week he announced medical and other assistance packages from these countries and travelled to New York to address the UN General Assembly, reportedly in favour of Taiwan’s admission as a member state.

Sogavare is also trying to contain growing opposition from poverty-stricken youth and working people to RAMSI’s free-market “economic reform” program. The occupation has widened the stark gulf between ordinary people and the privileged elites that have profited from RAMSI. Alongside upmarket hotels, apartments, supermarkets and shops, Honiara’s squatter camps have grown, full of young people either unemployed or working on very low wages.

The anti-government rioting that erupted in April was an early sign of deepening resistance to Australian political, economic and military domination of the Solomons. For all Canberra’s rhetoric about promoting “democracy” in the Pacific, it is planning further violent operations against the Solomons’ population. The Royal Solomon Islands Police Commissioner, Australian Shane Castles, announced on Tuesday that Australian-led security forces and police were preparing for possible unrest in Honiara when parliament resumes on October 2 to debate the no-confidence motion.

The record of the Howard government in the ousting of Alkatiri demonstrates yet again that Canberra will stop at nothing to assert its economic and strategic interests in East Timor and throughout the Asian Pacific region. Having dispatched troops to the island in 1999 and 2006, the Australian government, with US backing, is determined to undercut its rivals and install a compliant regime.