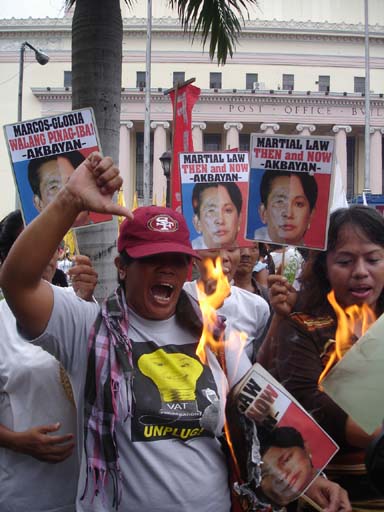 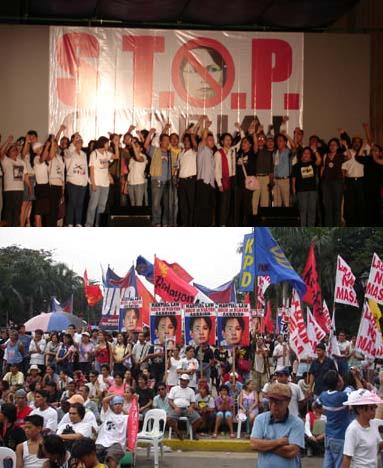 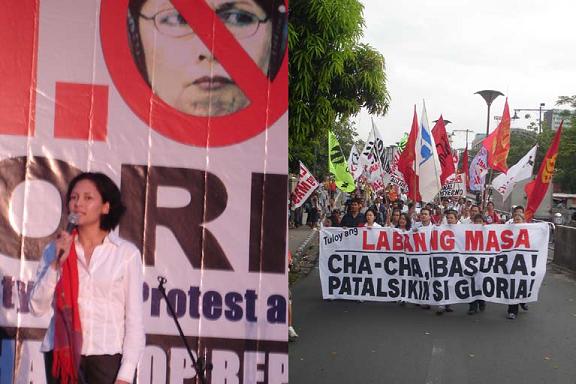 "The rule of law is in tatters for as long as Gloria Macapagal Arroyo (GMA) is in power," Akbayan declared today in street protests commemorating the 34th anniversary of the declaration of Martial Law.

"No other President in recent history has totally abused and twisted the law to suit her ultimate goal of political survival as much as GMA has," said Akbayan President Ronald Llamas. "The ruins she will leave will take an entire generation to rebuild and reform."

"Not only in her rapacious obstinacy to protect her family from allegations of involvement in jueteng, but also in the dozens of controversies and corruption charges hounding her minions in Malacañang, from her Department of Justice (DOJ) secretary to her Presidential Management Staff (PMS) Chief to her Labor Secretary to her Department of Environment and Natural Resources (DENR) chief and Presidential Commission on Good Government (PCGG) Commissioners and her Executive Secretary," added Llamas. "This administration is disgustingly elitist and trapo (traditional politician, literally means rug) to the very core, and it is not afraid to waste taxpayers' money to get its own way."

"In the reluctance of its officials to appear before congressional inquiries it is thumbing its nose in the Constitutional provisions of check and balances between co-equal government branches," explained Llamas, "in its sell-out of patrimony and its myopic interest to earn a quick buck in negotiations involving Piatco, the Macapagal Highway and the privatization of Napocor, this administration is spitting in the nation's face and damning the country to deeper poverty."

"Clearly GMA is riding roughshod over the nation's interests and sweeping under the rug all stink attributed to her and her family and administration," said Llamas. "Assuming power on the wave of a people power back in 2001, she has turned into a far worse monster than the plunderer she replaced."

"In issuing Proclamation 1017, and the continued arrogance of the executive to refuse to subject its officials to Congressional summons, the assumption of too much power under the guise of democratic rule is a dangerous precedent that GMA seems to ignore for as long as she is not toppled," said Llamas.

"In the meantime critical voices are falling by the wayside with hundreds of activists, peasants and media workers slain and their murders remaining unsolved," added Llamas, "and how odd that the killings seem to have stopped temporarily so, after GMA got a berating from foreign governments from her recent trip."

"This administration will go down in hell as one of the worst things to ever happen to the Philippines," said Llamas, "and considering its legitimacy is very suspect and its transparency almost absent, there should be no reason at all why this administration should stay in place one minute longer."