On Saturday 23rd September, some people went down London Soldier - "for three days only, Chelsea will be transformed into a hive of military activity, demonstrating the best the Army and the Reserve Forces have to offer" - armed with piles of State Of Emergency's "Join the army - be depressed" leaflets to offer potential recruits some information on the possible downsides to taking the Queen's Euro. 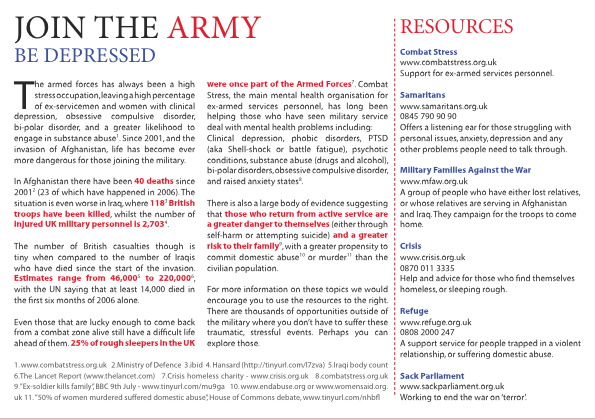 the leaflet given out on the day

Arriving at the front entrance of Chelsea Barracks, they were spotted by a platoon of Her Majesty's Forward Intelligencers (FIT) who immediately stop'n'searched them (under Section 1 of PACE) on suspicion of going equipped to cause Criminal Damage. The search seemed unusually thorough, as the FIT checked through the pages of their diaries and personal papers, pausing to photograph some of them.

People were asked for their names and addresses as they were suspected of anti-social behaviour (under Section 50 of the Police Reform Act 2002), one person queried what the actual alleged behaviour was, and was told that he had "been seen at previous protests". It's worth reminding ourselves here that the police say 'conflict' "may be defined as any act that is contrary to the public's perception of normality...It has the potential adversely to affect the status quo."

A genuine press pass was seized during one search by Sergeant RG73, allegedly under the "False [sic] Identity Cards Act", when the holder complained she was found to be in possession of a North American accent in a built-up area, and so was questioned about her immigration status by Constable CO2558, who was concerned she might be Canadian.

Given that this officer is a Public Order Tactical Adviser, one has to think that it may now be police policy to assume that any foreigner ungrateful enough to disagree with any aspect of Blair's Britain must be an illegal immigrant, ripe for deportation.

With the introductions taken care of, the FIT settled into their familiar routine of standing around looking gormless while one of their photographers, Neil Williams, meticulously recorded the footwear choices of each leafletter, perhaps for some bizarre form of psychological profiling.

As visitors trickled into the event the military police guarding the entrance evidently became concerned at the sizable proportion who were taking leaflets, and so made entry conditional on them being surrendered at the gate.

Unperturbed, the leafletters simply began giving them out to people leaving the event instead, so the FIT positioned themselves just past each leafletter and asked people if they wanted to hand over the leaflets they had been given only a moment before, and with exactly the same unthinking conformity that the army relies on, many of them instantly obeyed.

One of the military police asked the person handing out leaflets next to him: "Why weren't you out protesting like this when Saddam was gassing the Kurds and destroying whole villages?" "Mainly, because I was about five at the time." was the obvious retort, followed up by asking the soldier if he was aware that the US and UK had assisted Iraq in the eighties, and if he thought Britain should stop selling weapons to current allies with poor human rights records, like Turkey. "Oh no, not at all, we should sell weapons to whoever wants them." he replied.

Security was tight, with every visitor having to pass through a metal detector and undergo a bag search, but some were singled out for closer attention, including a pair of teenage boys accused of having long hair, who stood nervously while the police demanded their details and warned that their parents would be informed of any mischief.

A brief visit to a local pub for lunch required the leafletters to be followed by a ten officers and a photographer, who kept a close watch lest anyone attempt to nick too many chips off their mates.

A handful of the leafletters returned to the event, which was heading towards its finish time, and again handed leaflets out to those leaving. As there were now not enough civilian police around to try collecting them off everyone the military police started to advise people not to take them, Met Constable AB228 decided to join in and was heard repeatedly saying things like "you don't want to read that, it's anti-war rubbish", which might seem an abuse of his position, to an unkind observer.

More than 1,000 leaflets were given out over the whole day. Many of the visitors to the event were army cadets, and often the senior cadet in a group would seize the leaflets off all the others, in case of mutiny. Many cadets and other kids in their late teens did take the leaflets though, which led the police to threaten to arrest any person (under Section 5 of the Public Order Act 1986) seen giving one to "anyone under 18, as their minds aren't ready for that sort of thing", despite them being the right age to join the army - old enough to die, not old enough to think.

I never thought I'd see the day that an indy media contributor attacked a persons right to freedom of thought, the fact that it was some member of the plod probably does make a difference, although I'm sure you'd hail it as a triumph if one actually agreed with your point of view, rather than denouncing them for expressing an opinion.

James, how hard was it to sense the tone of Mike D's post?