Early this morning,eight anti-nuclear campaigners locked-on to the gate of the amunitions area in USAF Lakenheath in Suffolk. Three of the eight campaigners are local - Mell Harrison from Bungay, who is the co-ordinator of Eastern Region CND, Lesley Grahame from Norwich and Pete Lux from Norwich. The motto on the plaque outside USAF Lakenheath is 48th Fighter, The Liberty Wing, RAF Lakenheath,- "Ensuring Freedom's Future" and Mell Harrison today told the military personnel who are prevented by the lock-on from entering the Amunitions Area, " by preventing access to these weapons, we are securing freedom's future". The lock-on is likely to continue for some time today.
The protest follows yesterday's successful demonstration at the base when over 200 anti-nuclear campaigners gathered to protest against the 110 nuclear weapons kept on the base at any one time. Simultaneous protests were taking place at bases across Europe yesterday and David Higgin - a founder member of the Lakenheath Action Group which jointly organised yesterday's demonstration - read out messages of support from France, Belgium, Germany and Turkey. The campaigners were addressed by Bruce Kent, vice-Chair of National CND, by Kate Hudson, Chair of National CND and by Jeremy Corbyn M.P. (who had cycled from ELY to take part in the protest.)

In his speech called for the removal of all nuclear bases as they were a relic of the cold war and we must move on from that mind-set. Jeremy Corbyn MP , said that there was no moral cause that would condone the possession of nuclear weapons .He said that they have failed to buy us international influence and cited the achievements of Nelson Mandela - who had brought about the peaceful end of aparteid in his country and the renunciation of nuclear weapons - and all without a single nuclear weapon.

He went on to say, "We are here today so as not to be part of the silent acceptance of nuclear weapons - we are hear today to stand up and speak for all those who do not think that nuclear weapons make for a safer world. We are here to say No to nuclear and Yes to Peace".

Kate Hudson, CND Chair, spoke passionately of the need to protest against the replacement and upgrading of the Trident Nuclear Submarine's weapons system and called for a full public debate on the issue.

Torrential rain, hail, and thunder and lightening did little to curb the enthusiastic response of the campaigners who vowed to continue their protests - in agreement with the CND slogan "Now more than Ever"

The eight anti-nuclear campaigners who locked on to the Amunitions Gate at USAF Lakenheath early this morning have now been arrested under Section 128 of the new legislation :Serious Organised Crime and Police Act (SOCPA). They will continue to be "locked-on" while waiting for a cutting crew to arrive from Essex !

2nd UPDATE: The 8 anti-nuclear campaigners have now been cut free from their lock-on and 4 have been taken to the police station at Mildenhall and 4 to Newmarket. They will be questioned later today.

Photos from Sunday's Demo at Lakenheath 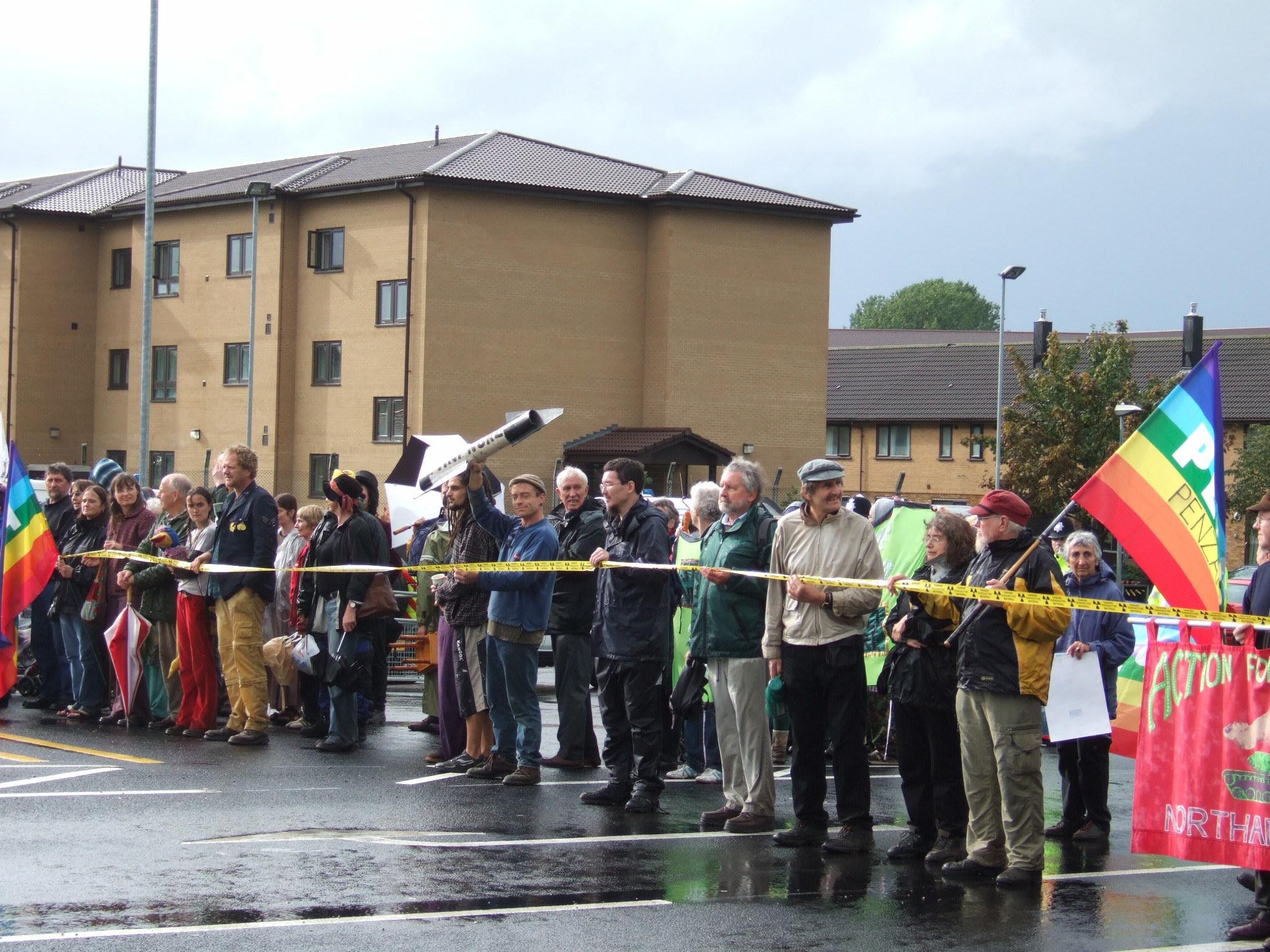 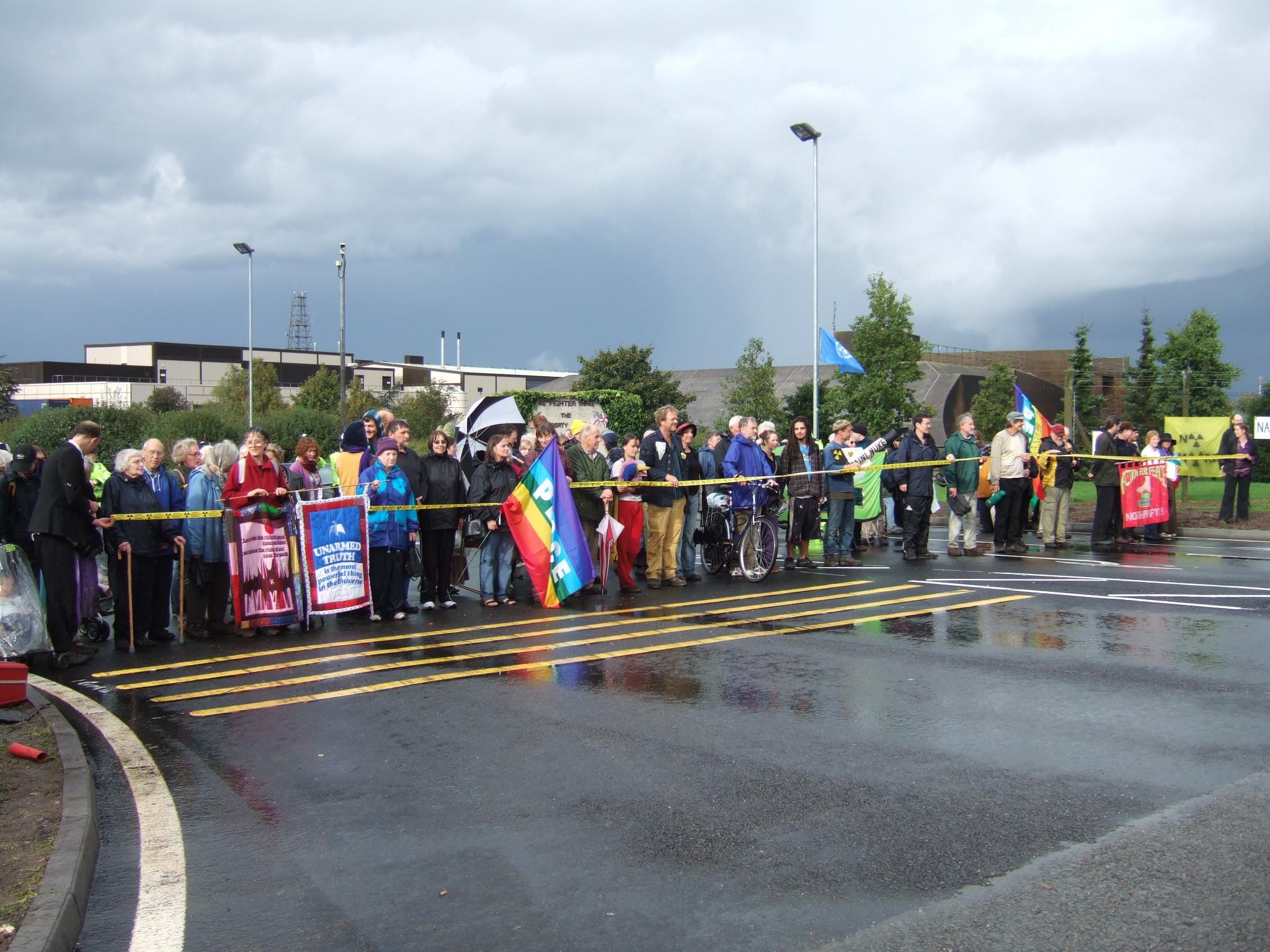 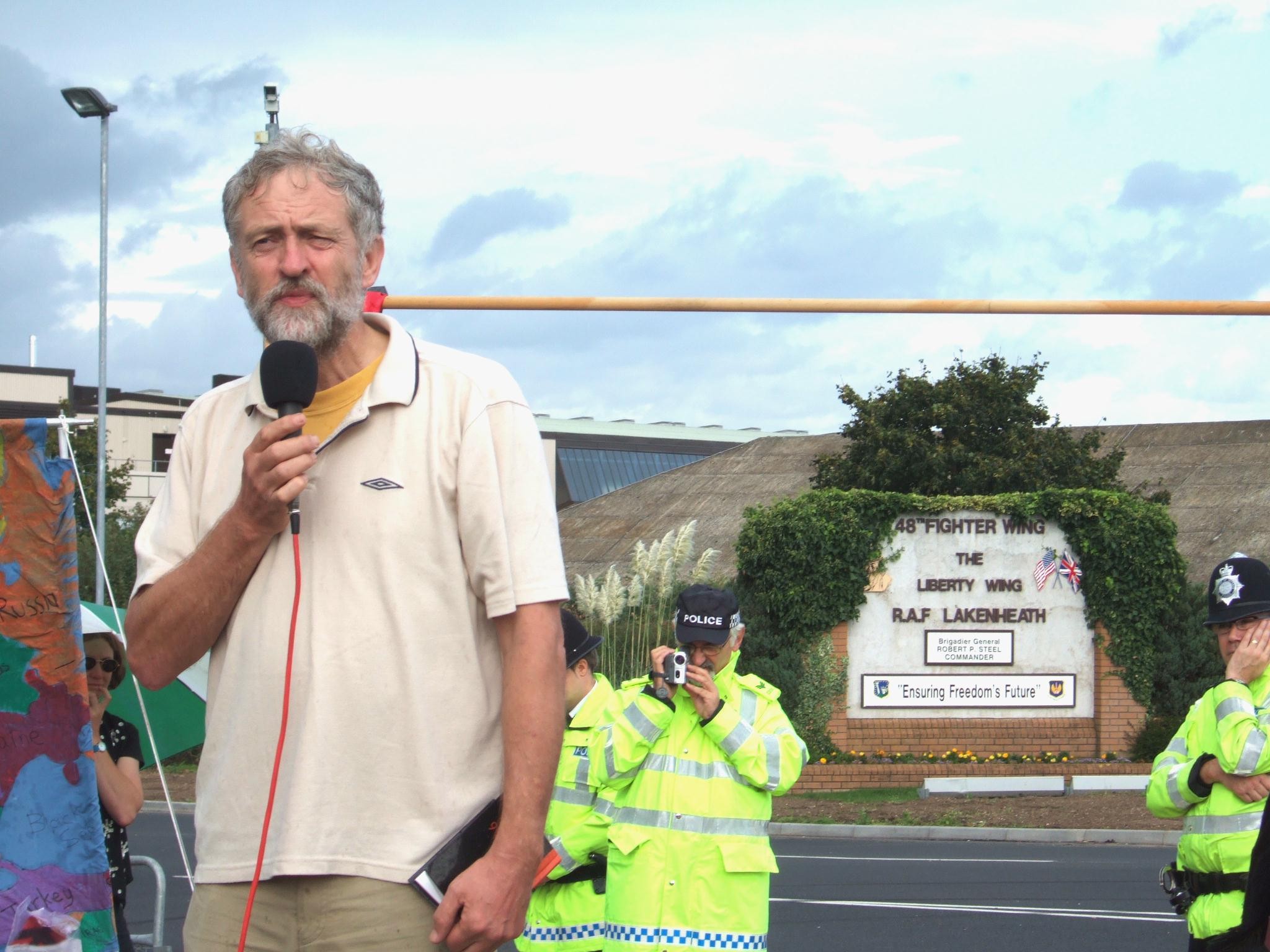 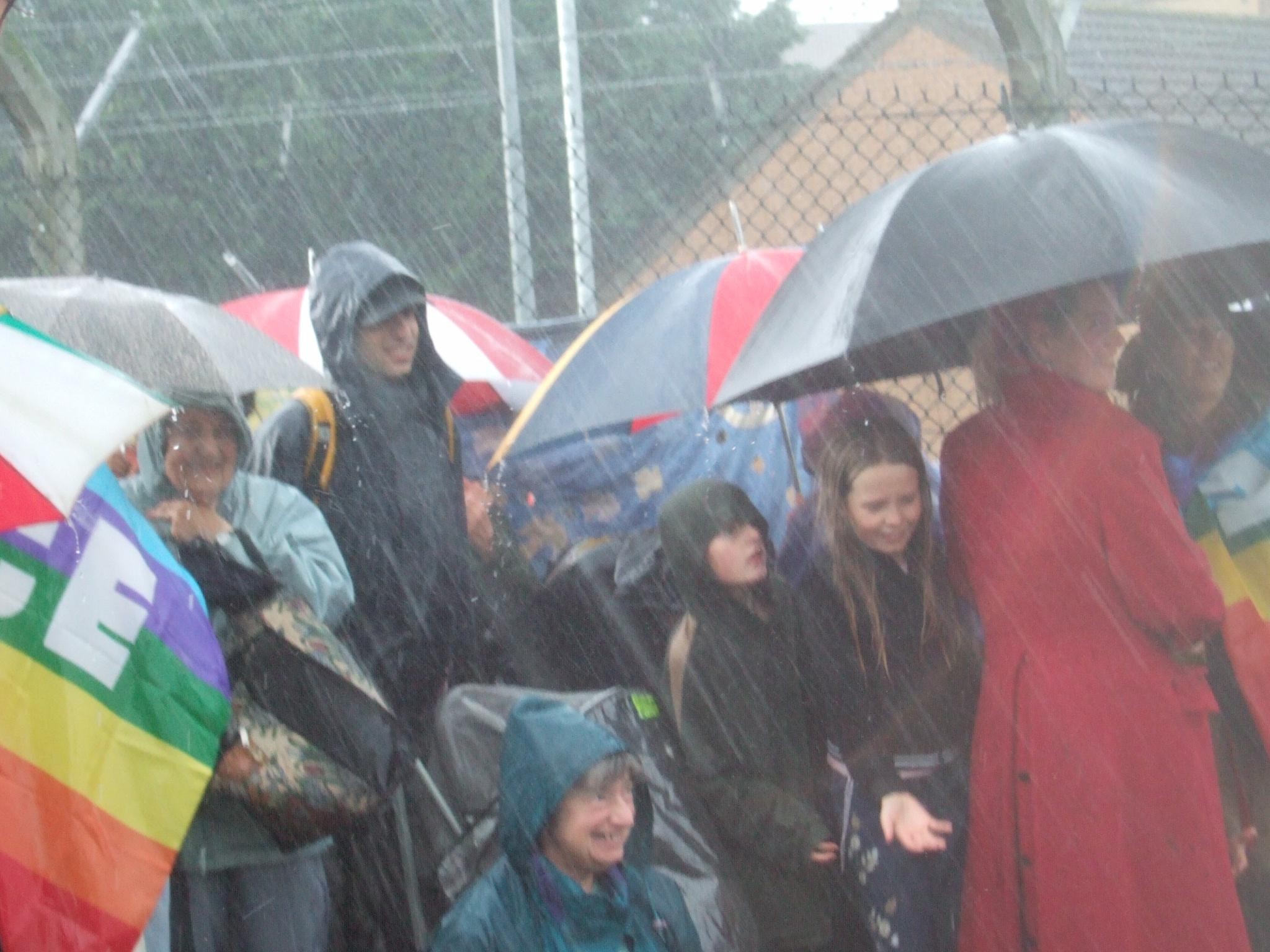 Is there still a drought? 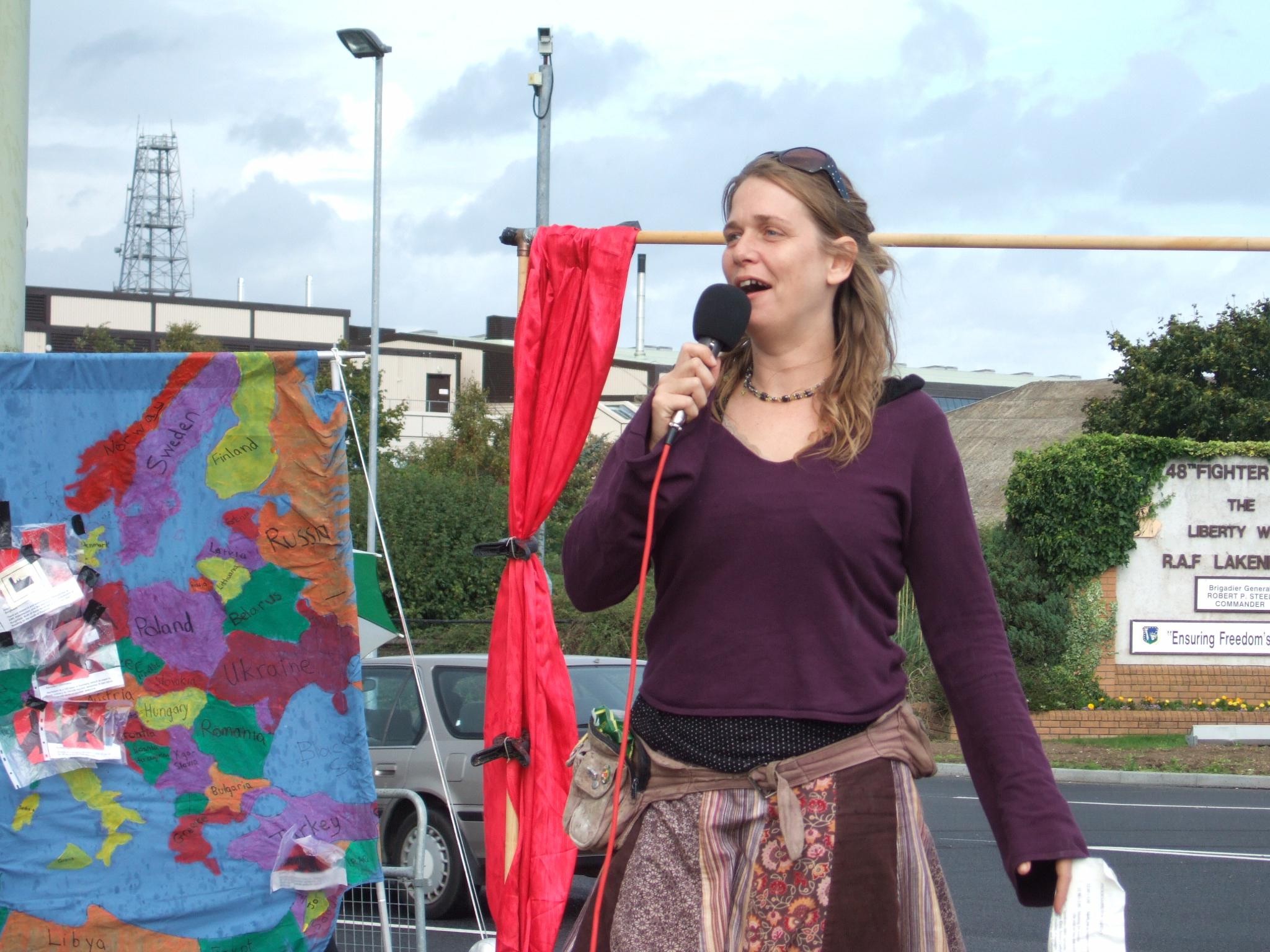 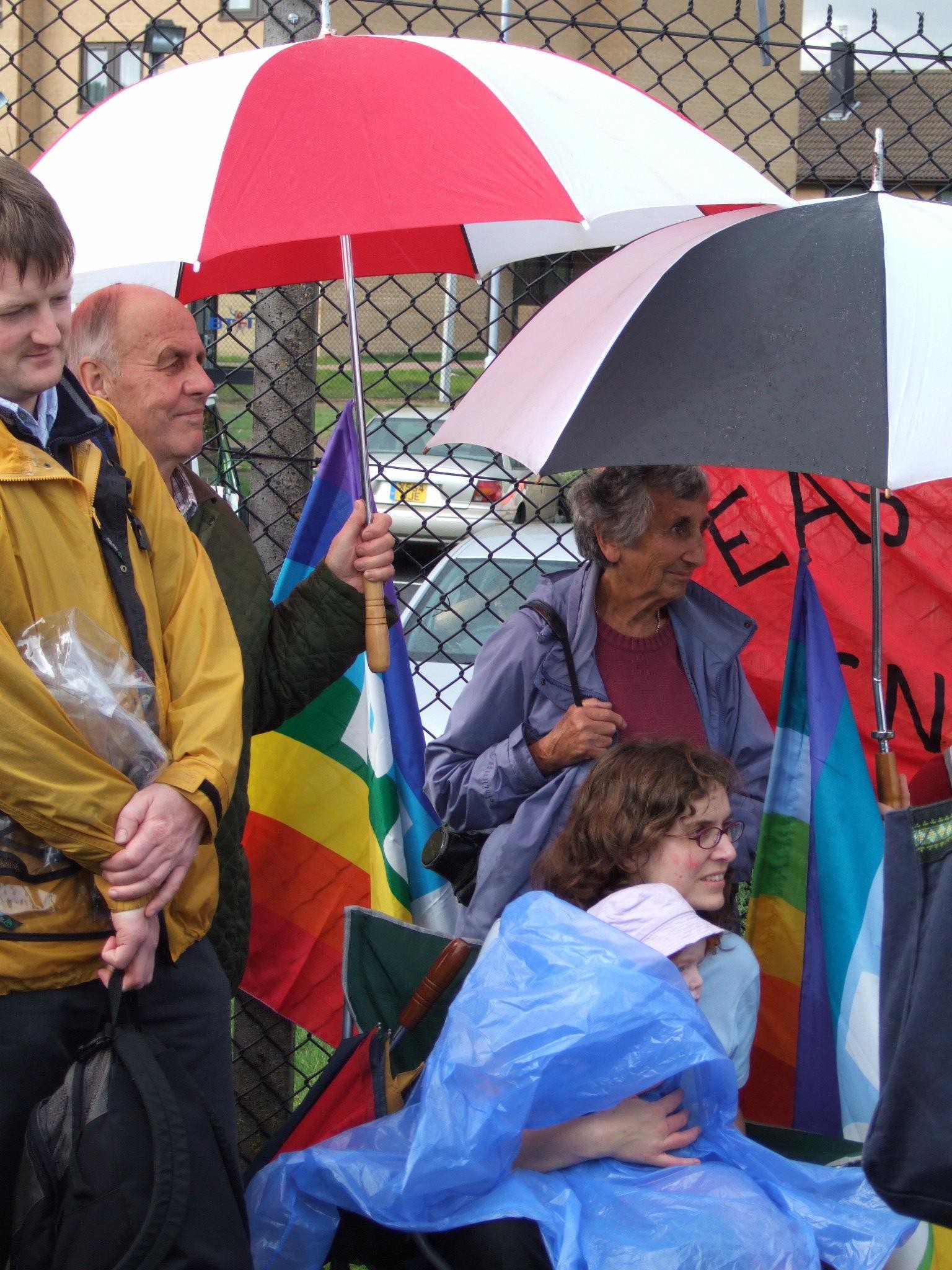 Young and Old Sheltering from the Rain

Here are some photos from Sunday's demo - if there are any photos available from today's action on the base I will get them up, but as they're all in jail at the moment it's hard to tell...

More Photos from Sunday, including Theatre of War! 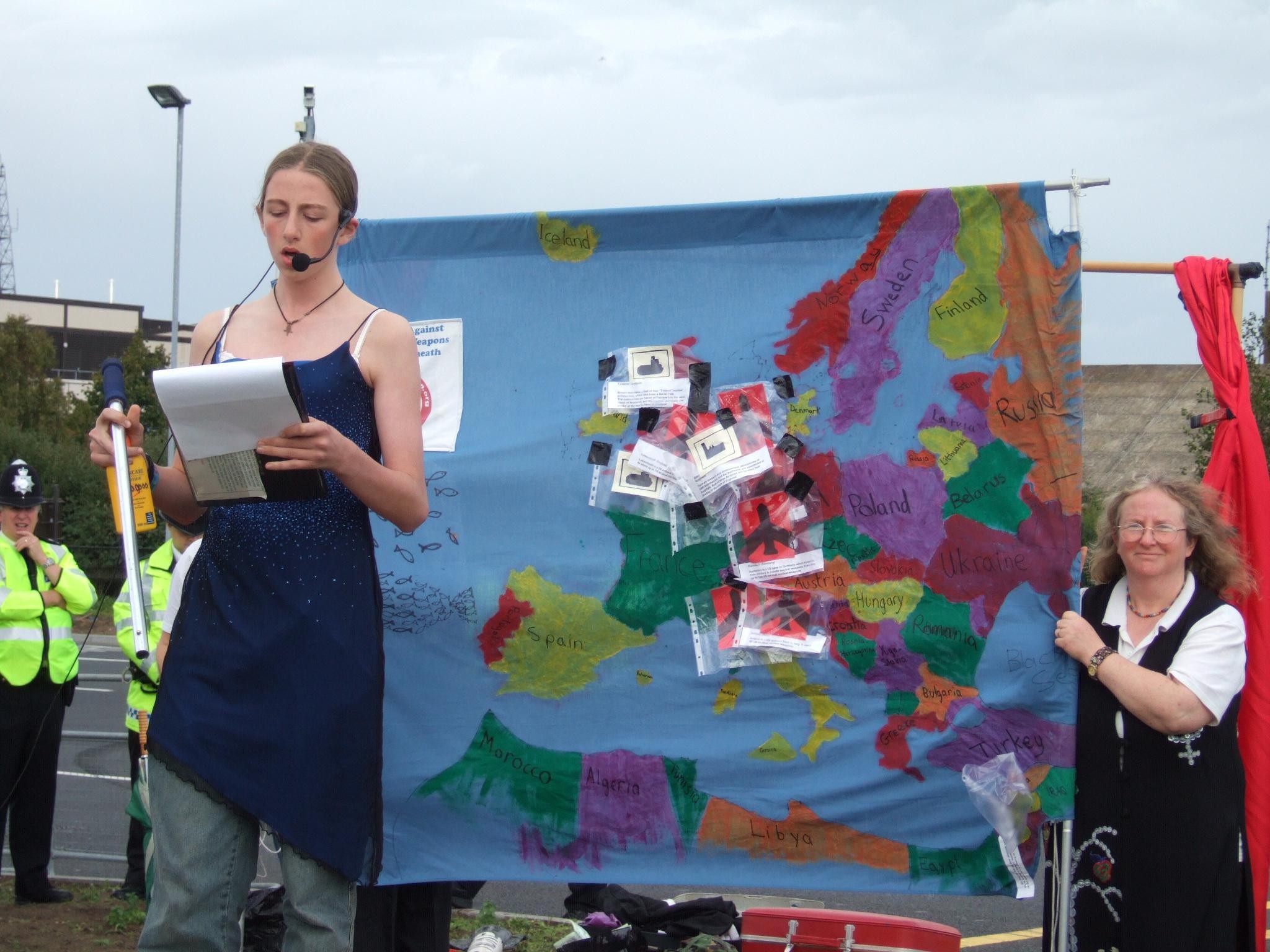 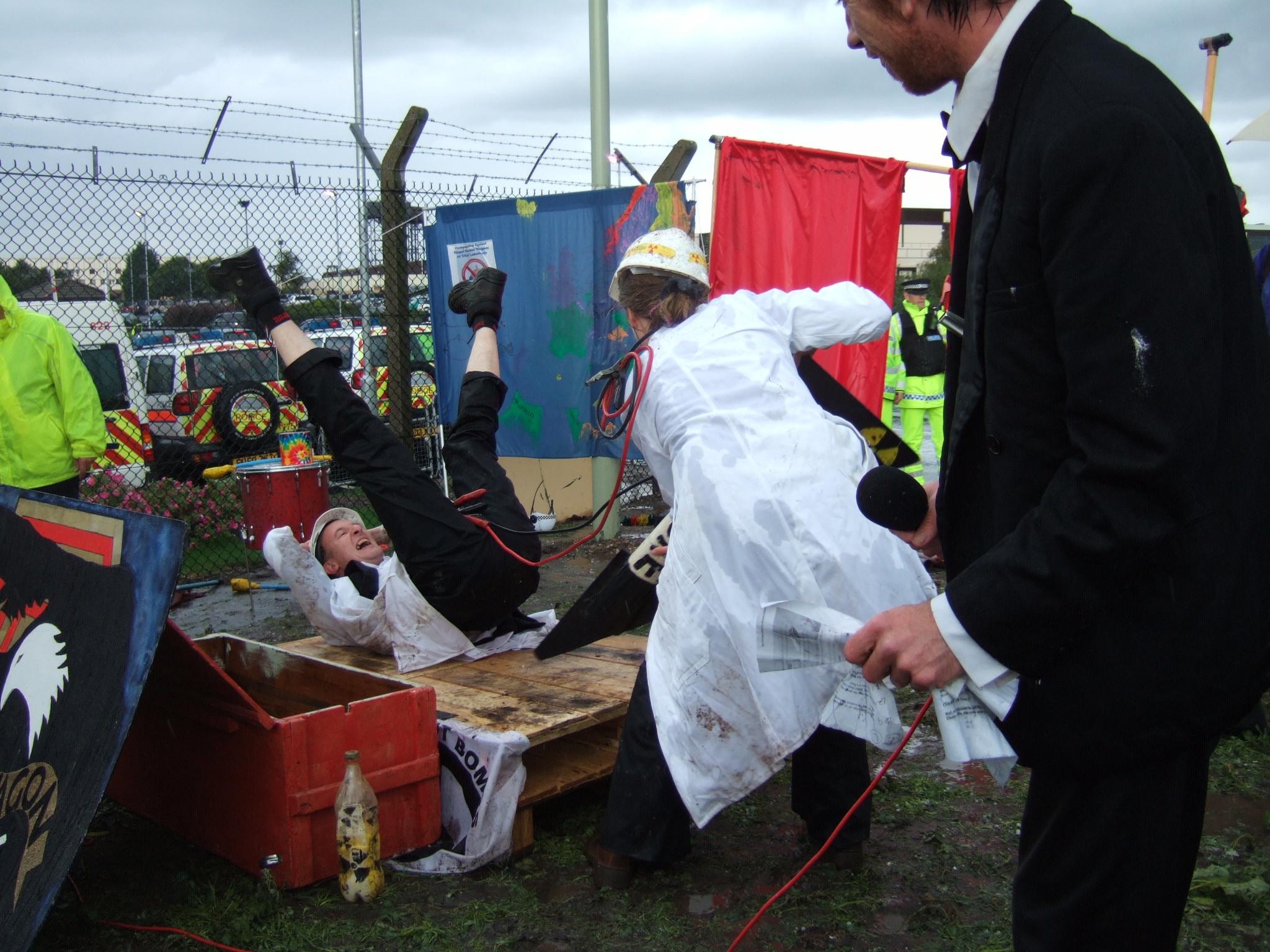 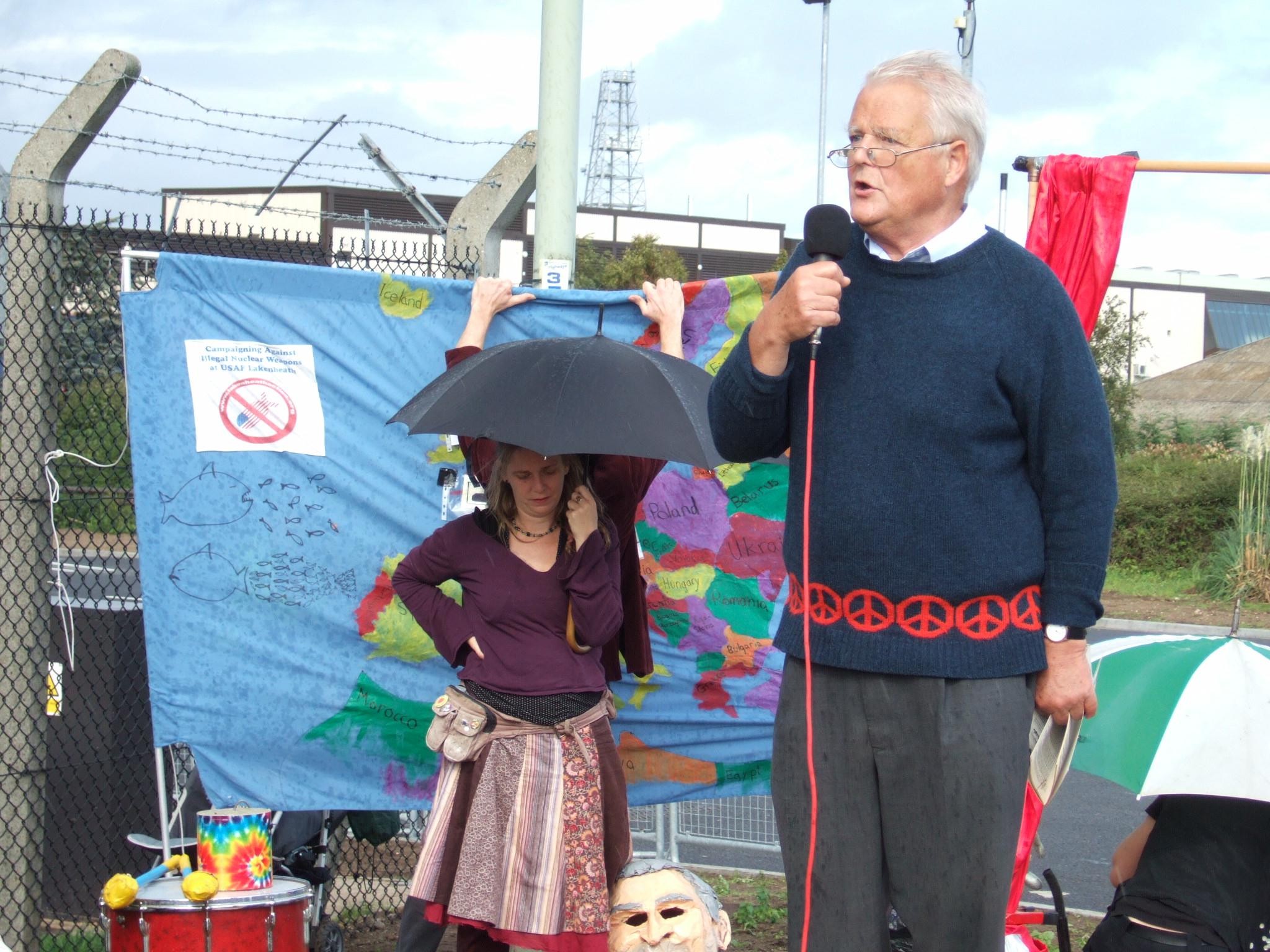 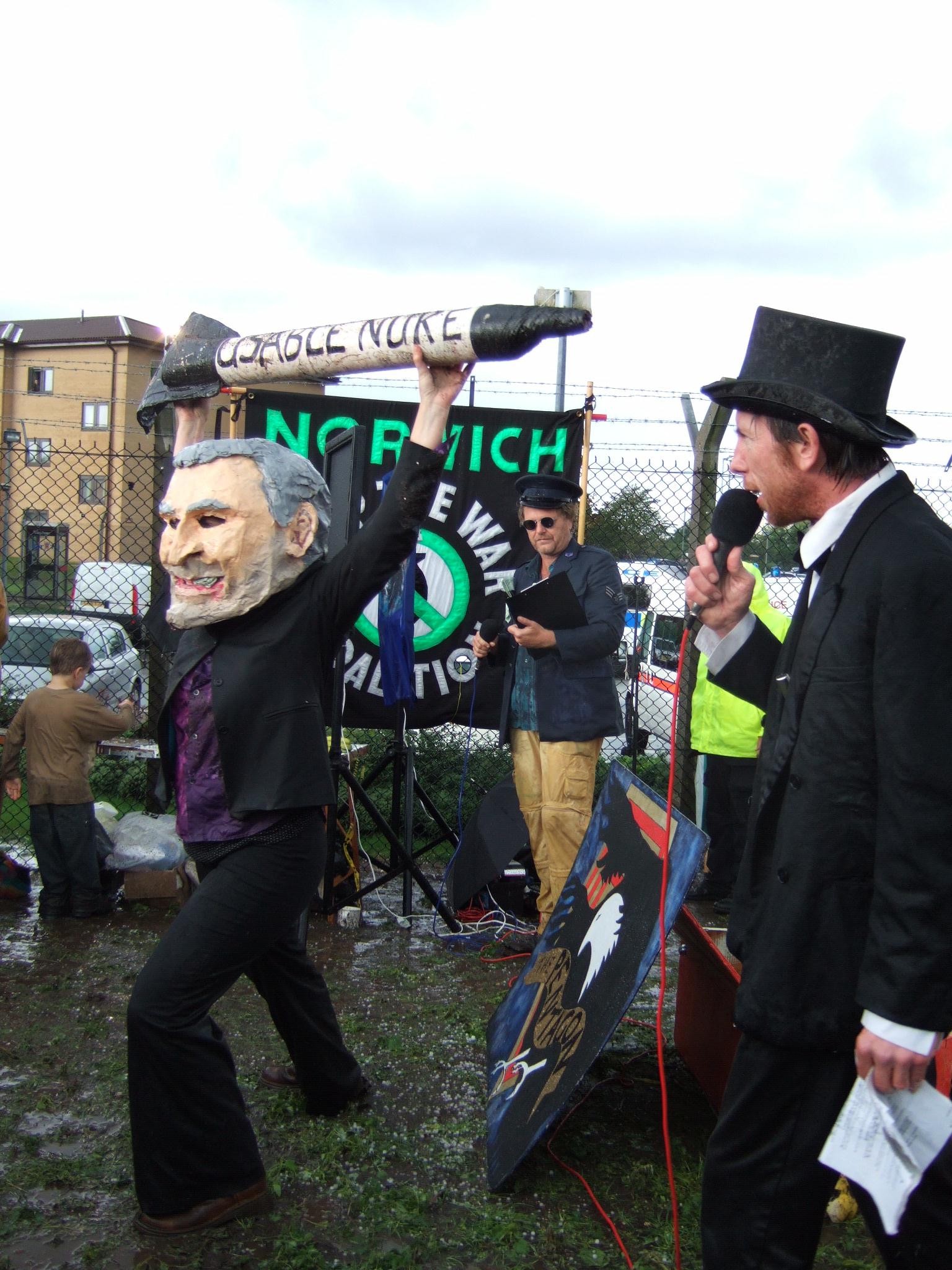 George Bush with his Usable Nuke 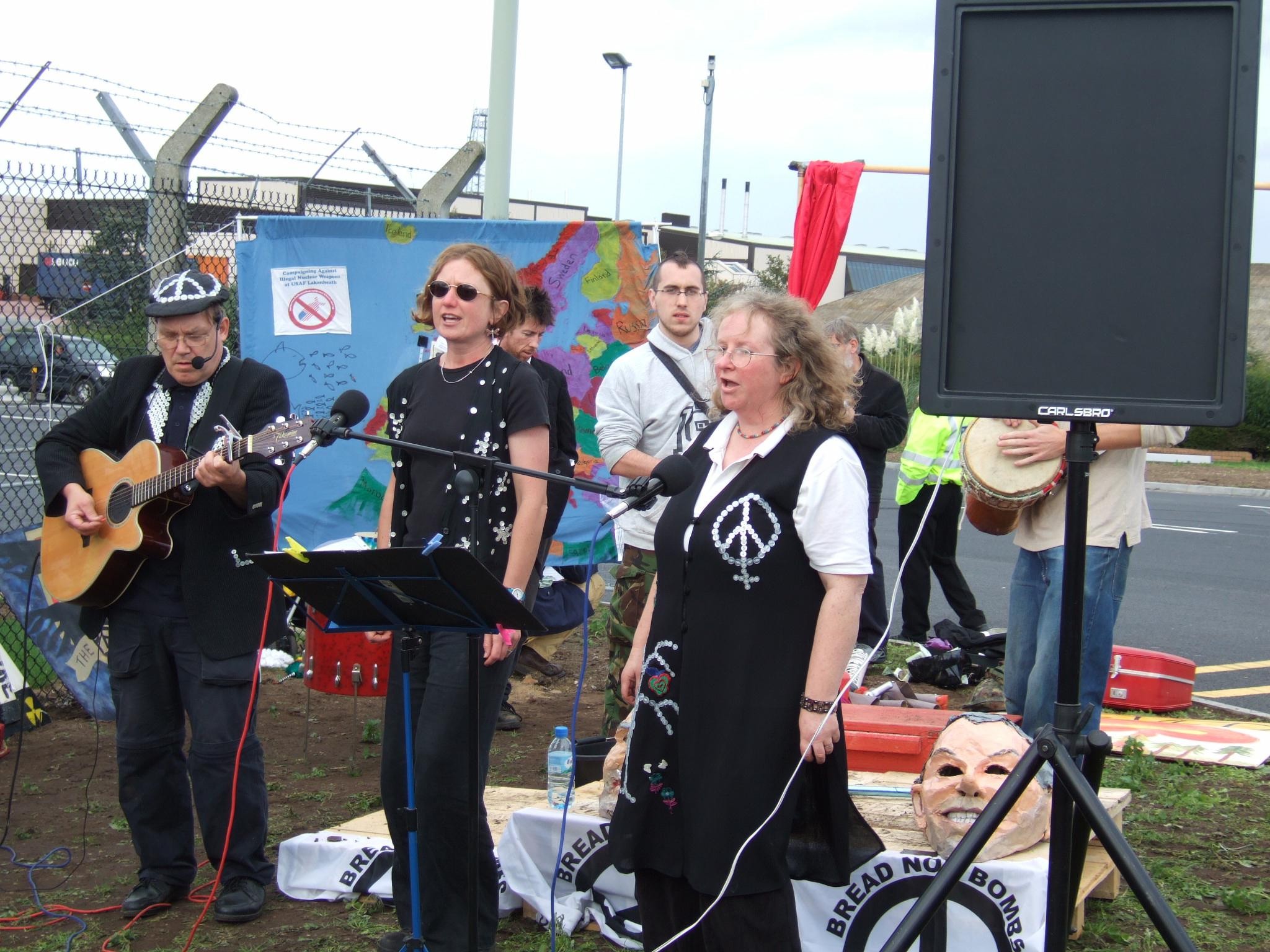 They were locked on for over 3 hours and then taken to Newmarket and Mildenhall. then arrested again for criminal damage.
so now have 2 cases to fight.
Section 128 of SOCPA (Criminal Trespass) and Criminal Damage.
CRIMINAL??
Who uses bombs that slice, kill, and deform ?
Who are the criminals?
It would be CRIMINAL to do nothing...........