Nottingham City Council have brought in sweeping new laws that will seriously affect the distribution of free activist literature in and around the city centre. Once again - as with fly posting - laws apparently designed to tackle the unbridled activities of commercial promoters are going to have a serious affect on activism and other legitimate exercise of free speech. In certain areas (which are sure to expand as time goes on, and already include the City Centre), free printed material may only be given out with permission and a bought permit from the council. 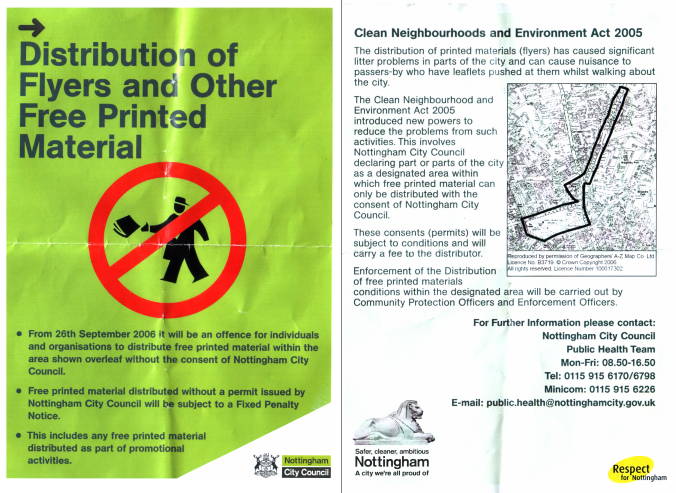 All very well for those who can afford a permit and don't want to criticise the council! But clumsy (or is it deliberate?) wording of the legislation makes absolutely no exception for non-profit grassroots activists.

We either have to stump up the cash for a permit (and cross our fingers that they approve of our literature) or shut up. Or we could ignore the law, and be fined up to £2500!

Quoting from their press release:

Nottingham City Council is getting tough on flyer distributors as it continues its bid to make our city's streets cleaner.

New powers are being introduced to the streets of Nottingham to control the free distribution of printed material and as a result the amount of littering on our streets.

Designation of an area requires a person to obtain the Council's consent before distribution can take place. If a person fails to get that consent and distributes material in designated areas an offence is committed for which they can be fined a maximum of £2,500 or a Fixed Penalty Notice can be issued. Distributors can also have the flyers/material seized if no consent has been given.

The Council can only designate land where it is satisfied that the land is being defaced by the discarding of free printed matter. Areas chosen are: Main Street, Bulwell; Mansfeld Road and Gregory Boulevard; Radford Road, Hyson Green; Southchurch, Clifton and the City Centre."

Ironically, the flyer they distributed this information on (a scan of which may be seen above) is glossy print on rather non-recycled looking paper. So presumably by "environment" they're only talking in terms of protecting that which financially affects their operations and keeps shoppers happy, not actually giving a damn about the planet!

What a delightfully ironic situation for campaigners giving out leaflets on REAL environmental issues! (I'm thinking NAIL, Plane Stupid, Friends of the Earth...)

public.health@nottinghamcity.gov.uk] - though I wouldn't expect them to listen without a mass public campaign.

Hey, I know! Maybe we could print up some attention-grabbing leaflets and hand them out in Market Squ... D'OOOOOH!!

Some Correspondence on the issue : Don't panic, all OK

Some Correspondence on the issue

GROUND RULES TO STAMP OUT LITTER