Whatever the outcome of this week’s parliamentary session in the Solomon Islands, the Howard government has made clear that it will stop at nothing to oust Sogavare and impose a government more in tune with Australian interests. 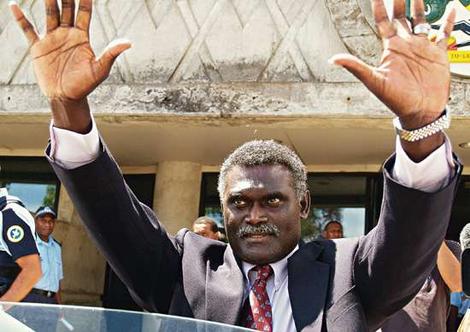 Neo-colonial grip over the country

The Australian government has stepped up its campaign to unseat the Solomon Islands’ Prime Minister Manasseh Sogavare and strengthen its neo-colonial grip over the country. Canberra orchestrated the provocative arrest of Julian Moti, the Solomons’ new attorney-general, in Papua New Guinea (PNG) on Friday, and has issued a series of threats ahead of today’s reconvening of the Solomons’ parliament.

Opposition leader Fred Fono, who has aligned himself with Canberra, has filed a motion of no-confidence in the government and claimed that several members of the ruling five-party coalition will vote against Sogavare. Under Australian command, troops and police have mobilised in the capital, Honiara, amid rising social and political tensions throughout the country. Australia’s foreign ministry has issued a travel warning advising people to avoid potentially violent protests and large meetings.

The political crisis has been engineered by Australian Prime Minister John Howard and his government, which targeted the Solomons’ government after the Australian High Commissioner Patrick Cole was expelled earlier this month for meddling in the country’s internal affairs. Cole had held a series of closed-door meetings with opposition politicians who were preparing to challenge Sogavare. The Howard government denounced the expulsion, and restricted the ability of Solomon Island members of parliament to enter Australia. Canberra also issued thinly veiled threats of aid cuts and other punitive measures.

On September 17, Sogavare launched an unexpected broadside against Howard, condemning Australia for violating the Solomons’ national sovereignty. He accused Howard of using development aid as political leverage in the dispute and denounced Australian “bullying” and “political manipulation”.

Canberra’s response has been to ratchet up the pressure. Moti’s extraordinary arrest demonstrates the gangster-like methods used by the Howard government.

The Solomons’ attorney-general was arrested at Port Moresby airport en route from Singapore to Honiara. Authorities in Canberra plan to extradite Moti on charges relating to a 1997 case in which he was acquitted in Vanuatu of sexually assaulting a 13-year-old girl.

Foreign Minister Alexander Downer’s claim that the arrest is strictly a police matter and had nothing to do with the Australian government is utterly absurd. Moti has been targeted by Australia, firstly as a means of destabilising the Sogavare government, and secondly because of his role in the government’s Commission of Inquiry into the causes of the April 18-19 riots in Honiara.

The riots were fuelled by growing resentment and hostility towards Australia’s neo-colonial takeover of the country in 2003. The Australian-dominated Regional Assistance Mission to Solomon Islands (RAMSI) has since taken control of the country’s key institutions, including the police, courts, prisons, finance department and economic planning.

The April disturbances were triggered by a RAMSI military and police operation aimed at defending Sogavare’s predecessor, Snyder Rini. After a general election saw the defeat of the pro-RAMSI government of Allan Kemakeza, Rini, previously Kemakeza’s deputy prime minister, manoeuvred his way to the prime ministership. When angry crowds looted and burned hotels, businesses and offices, Rini was forced to resign and make way for Sogavare, despite the arrival of more than 500 extra Australian-led troops and police.

Sogavare had previously called for an “exit strategy” for RAMSI. While he dropped this demand and his anti-Australian posturing once in power, the prime minister nevertheless drew the ire of Canberra. One major point of contention was Sogavare’s support for two parliamentarians, Nelson Ne’e and Charles Dausabea, who were made scapegoats for the riots and jailed by RAMSI authorities. Sogavare established a Commission of Inquiry to investigate the cause of the April riots, and also determine whether the arrest of the two MPs was politically motivated.

The Howard government immediately sought to derail the inquiry. The investigation threatened to shed light on the actions of the RAMSI forces during the riot, and also why there was such hostility towards Rini and RAMSI. Any examination of RAMSI’s real character would have undermined the Howard government’s lie that the operation was a “humanitarian intervention”.

After former Australian Federal Court judge Marcus Einfeld was appointed head of the Solomons’ inquiry—reportedly on Moti’s recommendation—he immediately became the target of a witch-hunt. Just five days after he accepted the position, the Australian media published a series of sensationalised reports, supposedly because of an unpaid speeding fine worth $77. The stories have since disappeared from the headlines following Einfeld’s withdrawal from the commission on September 17.

Moti has now become the latest victim of Canberra’s dirty tricks. Moti, a personal friend of Sogavare, was closely involved in shaping the Commission of Inquiry. He also has connections with the two imprisoned MPs, who, according to one report, are represented by his private law firm. The Howard government and RAMSI regard Moti as a Melanesian nationalist and hostile to Australia’s interests.

Embarrassingly for the Howard government, the attorney general is now missing, and according to some reports is heading back to the Solomons. Moti failed to attend a Papuan court hearing on Saturday after being granted bail following his arrest the day before.

While the circumstances remain unclear, there are indications that Papuan authorities encouraged Moti to flee, after Sogavare intervened. The Solomons’ prime minister publicly condemned Moti’s arrest as “a serious violation of the sovereignty of the Solomon Islands and a disregard of established institutions here”.

According to the Australian, Sogavare telephoned PNG Prime Minister Michael Somare shortly after the arrest. A government spokesperson later told the newspaper that Moti had been released because proper procedure had not been followed in the arrest. “As far as the PNG Government is concerned, the transnational crime unit acted without authority,” the spokesperson declared. “It’s not really a PNG concern, he was just in transit here.”

Moti’s escape will only strengthen the Howard government’s determination to topple Sogavare. Downer met his Solomons’ counterpart on September 22 at the UN General Assembly meeting in New York and issued a blustering denunciation of Sogavare.

“I explained what I’ve said already, that we were outraged about the expulsion of our high commissioner, that was quite the wrong thing to do,” he later declared. “Secondly, that RAMSI is an integrated package and we’re not going to have RAMSI salami-sliced or neutered in any way in delicate areas like improvement in the operation of public finances in the Solomon Islands. That has to be understood; it’s an integrated package. I think he understood the point... Today has been a very good opportunity for me to ram home our message about what we think is acceptable and what we don’t think is acceptable.”

Downer’s remarks underscore Canberra’s contempt for the Solomon Islands’ national sovereignty. The message is clear: keep quiet, do as your told, and accept Australia’s indefinite control over key economic and governmental institutions.

The Howard government’s bullying is only possible because of the Bush administration’s patronage of Australia’s strategic interests in the South Pacific. This US support is the quid pro quo for Australia’s participation in the US-led wars in Afghanistan and Iraq, and endorsement of Washington’s aggressive stance against other countries such as Iran.

Robert Fitts, the PNG-based US ambassador to the Solomons, wrote a letter to the country’s Governor General Sir Nathaniel Waena condemning the Commission of Inquiry and backing all Australia’s ultimatums. “It is vital that the Government of Solomon Islands extend the same degree of cooperation to all components of RAMSI, including judicial, financial and other areas of reform that it showed in working with RAMSI on initial security programmes,” the ambassador declared.

Whatever the outcome of this week’s parliamentary session in the Solomon Islands, the Howard government has made clear that it will stop at nothing to oust Sogavare and impose a government more in tune with Australian interests.