Bad ideas are like starfish: You can cut them up, but unless you squash them into jelly and incinerate the remains, they will multiply. I’m not really saying that we should go around murdering idiots . . . but this week’s “news” certainly made me want to beat a few people mercilessly. 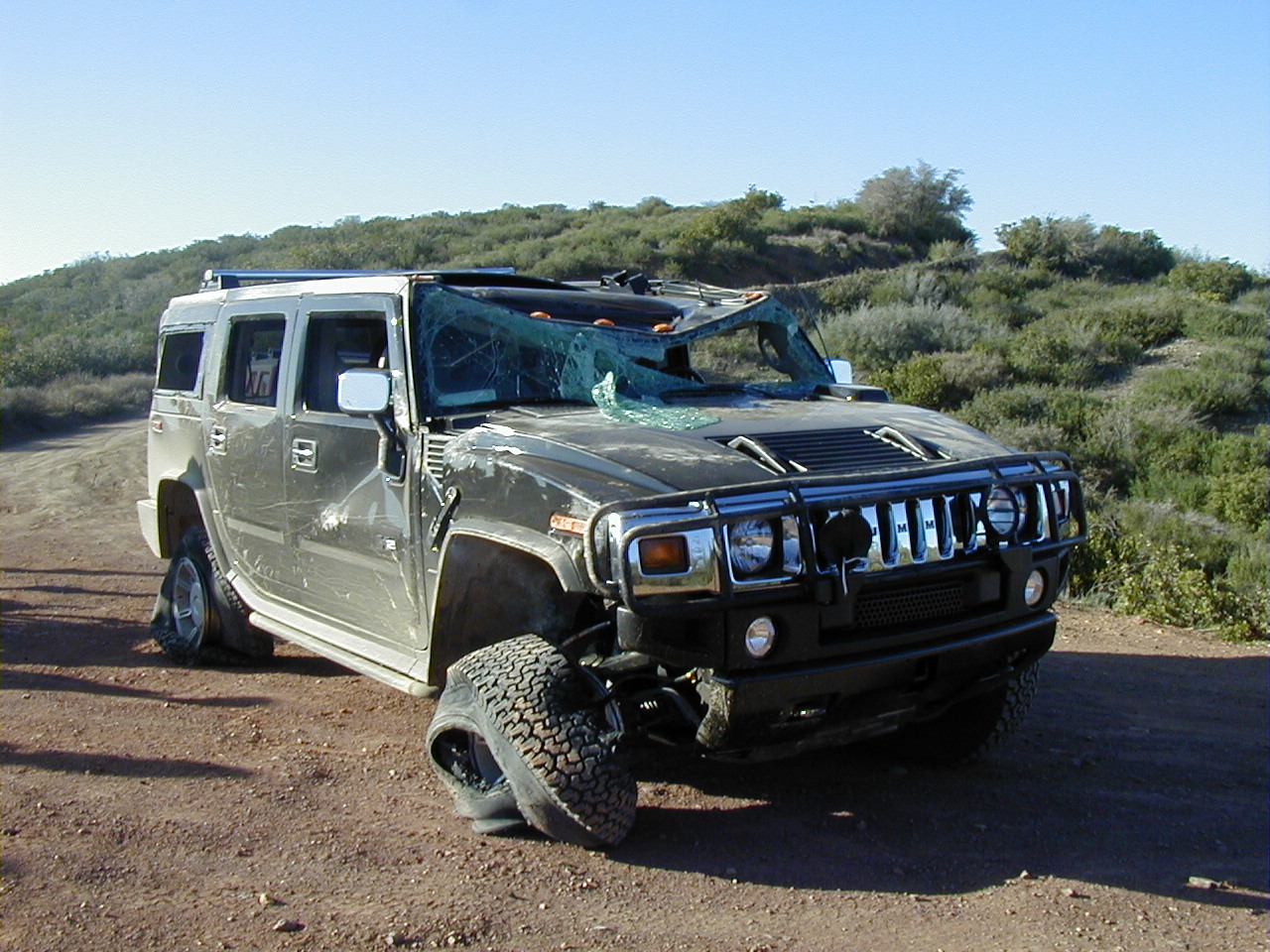 For example, in the midst of a botched oil war and facing the looming catastrophe of global warming, General Motors Vice Chairman Bob Lutz expressed the need for more oversized gas guzzlers at the opening of a Hummer dealership in Paris. "Hummer needs some more products. It needs two or three more products to give it sufficient market coverage." How about a Hummer-brand blimp that’s big enough to block out the sun? Then they could overshadow all markets with a single product. Jeez, where’s an angry mob of disenfranchised French teenagers when you need them?
Unfortunately, the Hummer story is just the tip of the rapidly melting iceberg in this week’s edition of Shaking Uncontrollably. The government, the military and Christian evangelicals all expressed ambitions that are far more stupid and dangerous than bigger SUVs.
Will they get light sabers, too? A program known as “Hot Eagle” is apparently nearing its goal of making space travel accessible to Marines. According to Defense Technology International, “The concept is to deliver strategic equipment or a small squad of soldiers to any point on the globe—even the most hard-to-reach location— within hours of need.” Great. Maybe next time I’m in trouble I should call the Marines, because one of my friends called 911 a few weeks ago when he was robbed and it took the San Francisco cops more than 5 hours to get to his house, even though it’s less than a mile from the police station.
The War is Just a Brief Pause: During an interview on CNN with Wolf Blitzer last week, President Bush looked into his metaphorical crystal ball and made the following proclamation: “I like to tell people when the final history is written on Iraq, it will look like just a comma . . .” Hmm. Maybe he’s just basing this prediction on what declassified National Intelligence reports on Iraq currently look like, because everything else has been blacked out by the CIA.

Keepin’ it real (real ignorant) Following a closed-door meeting with President Bush last week, Sen. Trent Lott told the press that he and the Prez didn’t really feel like it was necessary to talk about Iraq. The Mississippi Republican said, "You're the only ones who obsess on that. We don't and the real people out in the real world don't for the most part.” The academic test scores of his home state imply that in his “real world,” people don’t obsess over literacy or mathematics, either.

However, Lott did express some confusion over this faraway place that he doesn’t really think about. He added, “It's hard for Americans, all of us, including me, to understand what's wrong with these people. Why do Sunnis kill Shiites? How do they tell the difference? They all look the same to me.” Try sitting a little closer to the TV, Trent. Remember that this is the guy who had to resign as Senate Majority Leader in 2003 following public uproar after he said that America would have been a better place if segregationist Strom Thurmond had won the presidency. Maybe the Iraqis all look alike to Trent Lott because every time he’s near a person of color he’s wearing that pointy white hood.

Political Change: A deadlocked race between two Democrats vying for a seat in the Alaska state House of Representatives was decided last week by a coin flip. The guy who called “tails” won and will face a Republican in the general election next month. How are they going to decide that one—rock, paper, scissors or thumb war?

Hillary “666” Clinton: At a “Value Voter Summit” in Washington DC last week, Rev. Jerry Falwell implied that his followers prefer Satan to Hillary Rodham Clinton. "I certainly hope that Hillary is the candidate,” Falwell said. “Because nothing will energize my (constituency) like Hillary Clinton. If Lucifer ran, he wouldn't." Yeah, that’s because the Lord of Darkness would inevitably pick Dick Cheney as his running mate and all the Christians would be confused.

Yet Another Militant Pro-life Wackjob: Earlier this month, David McMenemy, 45, drove his car into the Edgerton Women’s Health Center in Iowa because he mistakenly thought that the clinic performed abortions. Upon crashing through the front door, he poured gasoline all over himself, but upon further consideration, decided not to immolate himself. Now he’s faced with a federal charge of committing arson against a business affecting interstate commerce. The charge carries a prison term of between five and 20 years and a fine. Wow. Good thing he didn’t tarnish any SUVs during his terrorist assault on this women’s clinic or he might really be facing some serious time —like Jeff Luers, the kid who got 22 years for burning three sport futility vehicles.

All this talk about SUVs is making me bummed that I missed last Friday’s Critical Mass, but I thought is was more important to check out the California First Amendment Coalition’s Free Speech and Open Government conference in Berkeley. I forgot to pre-register, but with so many Bay Area journalists being sent to jail lately, I knew I could count on finding an open seat. Free Josh Wolf.