The neoliberals have sided with the neoconservatives in almost everything of any great import (in deed, not in speech) so it becomes difficut to tell the two apart any more. All the rhetorical terminology serves only to confuse. What we have are two wings of the business party. 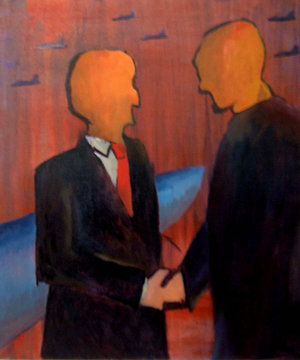 TEHRAN, Feb. 14 (MNA) -- Most of the neoconservatives in the United States advocate globalization and the neoliberal economic model. What’s wrong with this picture?

It is natural for language to evolve, but when antonyms become synonyms, there is a problem.

The situation is similar to the Newspeak and doublethink of George Orwell’s book 1984. Newspeak was a language meant to control people by decreasing their power of reasoning through oversimplification of the language and doublethink.

Orwell wrote: “Doublethink means the power of holding two contradictory beliefs in one's mind simultaneously, and accepting both of them.”

There are now countless examples of this in the English language.

In war, civilian casualties are called collateral damage. The use of the expression collateral damage allows people to avoid the unpleasantry of having to think about innocent civilians being killed.

Every country used to have a war ministry, but they all later changed the name to the defense ministry or the defense department. In 1984, it was called the Ministry of Peace, or Minipax in Newspeak.

Try this simple exercise. Imagine you are listening to the radio and the newscaster says: “The war minister has just issued a statement.”

Now suppose the newscaster said: “The defense minister has just issued a statement.” Notice how a change of one word changed your reaction.

Consider the many acronyms that have entered the language such as NATO, NAFTA, and CIA. Their complete names, North Atlantic Treaty Organization, North American Free Trade Agreement, and Central Intelligence Agency, contain the words treaty, free, free trade, agreement, and intelligence. On hearing these words, the mind naturally makes many free associations that cannot occur when the acronyms are used.

The neoliberal neocons themselves use a form of Newspeak.

The most glaring example of this is when neoliberal neocon officials in the United States tell citizens that they must take away some of their freedom in order to protect their freedom. Shades of Orwell’s “freedom is slavery”.

U.S. officials have spoken of the need to cancel elections in order to safeguard democracy if a serious crisis arises. Some have even gone so far as to suggest that in a national emergency the U.S. Constitution may have to be temporarily suspended in order to protect the civil liberties enshrined in that document.

Bizarrely, very few U.S. citizens are protesting. Apparently, they have already learned how to employ doublethink.

Language is being used to control people. People are actually subconsciously brainwashing themselves through the language they use.

The word neocon itself is Newspeak since its use in place of the longer form eliminates all the connotations of the words neoconservative and conservative.

Let’s look at a few more quotes from 1984 to get a better understanding of what is happening today.

“To know and not to know, to be conscious of complete truthfulness while telling carefully constructed lies, to hold simultaneously two opinions which cancelled out, knowing them to be contradictory and believing in both of them, to use logic against logic, to repudiate morality while laying claim to it, to believe that democracy was impossible and that the Party was the guardian of democracy, to forget whatever it was necessary to forget, then to draw it back into memory again at the moment when it was needed, and then promptly to forget it again: and above all, to apply the same process to the process itself. That was the ultimate subtlety: consciously to induce unconsciousness, and then, once again, to become unconscious of the act of hypnosis you had just performed. Even to understand the word 'doublethink' involved the use of doublethink.”

“The Ministry of Peace concerns itself with war, the Ministry of Truth with lies, the Ministry of Love with torture and the Ministry of Plenty with starvation. These contradictions are not accidental, nor do they result from ordinary hypocrisy; they are deliberate exercises in doublethink. For it is only by reconciling contradictions that power can be retained indefinitely. In no other way could the ancient cycle be broken. If human equality is to be for ever averted -- if the High, as we have called them, are to keep their places permanently -- then the prevailing mental condition must be controlled insanity.”

“The purpose of Newspeak was not only to provide a medium of expression for the world-view and mental habits proper to the devotees of Ingsoc, but to make all other modes of thought impossible. It was intended that when Newspeak had been adopted once and for all and Oldspeak forgotten, a heretical thought -- that is, a thought diverging from the principles of Ingsoc -- should be literally unthinkable, at least so far as thought is dependent on words.”

“Newspeak was designed not to extend but to diminish the range of thought, and this purpose was indirectly assisted by cutting the choice of words down to a minimum.”

“But the special function of certain Newspeak words, of which oldthink was one, was not so much to express meanings as to destroy them.”

“The intention was to make speech, and especially speech on any subject not ideologically neutral, as nearly as possible independent of consciousness.”

“Ultimately it was hoped to make articulate speech issue from the larynx without involving the higher brain centres at all.”

The advocates of globalization often use a form of Newspeak.

When government officials and economists say the economy of a Third World country is booming, despite the fact that they know the masses live in abject poverty, and the media repeat the lie, that is doublethink through Newspeak. Of course, the economy of the country in question is only booming for the globalist and local upper classes, and perhaps also for the middle classes, but somehow almost nobody questions the lie. And the neoliberal globalists are laughing all the way to the bank.

The acceptance of such a lie by the general public is an even greater real-life catastrophe than the fictional one described in 1984. Worse still, some people acknowledge that it is a lie but respond with apathy or slavish resignation in the belief that nothing can be done about the situation.

If not, we should watch our language and take care that we are still using our higher brain centers.