We know how distressing it can be to lose your job. As we're sure people who have been sacked know it is helpful to have caring and supportive people around you to deal with the stress of being unwanted. In this spirit we will be helping sacked MPs and Civil Servants get over their distress of being fired on Monday 9th of October. 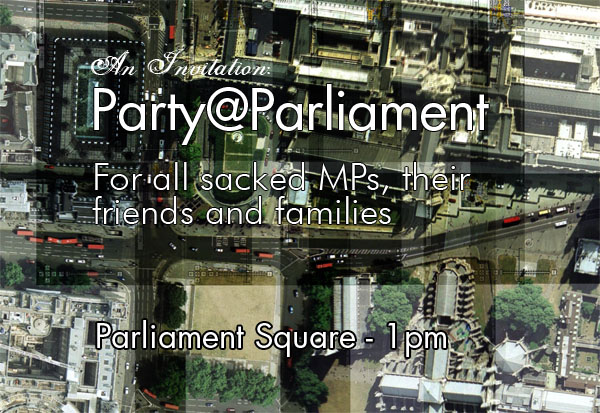 Judging by recent statements MPs only have a few days left of employment. Unsurprising really when you consider they have dragged people into two unwinnable wars (three if you count their war against a noun), and caused the deaths of hundreds of thousands of people. Enough is clearly enough, and on the 9th of October these fools will finally be given their marching orders.

But if you can spare them a brief thought of the stress that they will be facing. There are only a few companies who will happily employ war profiteers and war adventurers. We're offering our help by turning the afternoon of the 9th into a Party@Parliament. All Members of Parliaments, Lords, civil servants and their lackeys are invited. They will be able to boogie away their blues, canoodle in the corner underneath Winston's watchful eye and generally forget that they have destroyed the lives of thousands of others.

This party is, of course, also open to all the various members of the public who are coming to Sack Parliament. We think it will be a good chance for them to mingle with the recently sacked MPs, and maybe give them some advice on what else they could do. Perhaps they can point them in the direction of the Job Centre?