These stories are translated from Indymedia Estrecho, originally posted between August and October last year. We do not want the experience of thousands to be lost among emails and passed messages. This is their history. These are finite tales, the story is unfinished. The lives and the movements that are found among them continue today, being written, behind the text. 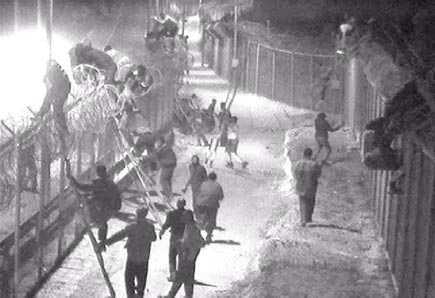 During those intense months when hundreds of 'illegal' immigrants arrived each week, something changed on the southern border of Europe. There have been hundreds of images circulating about what was happening at the fences of Ceuta and Melilla. This sudden battle of an endless war has left many bodies in it's wake. The historical migrant traffic from Morocco to Europe was changed substantially in those months. More than 4000 sub-Saharans were expelled from Moroccan territory in less than one and a half months. Many more are still in military camps.

02.00 h
We've arrived at the fence. I must have cut myself on the remainders of wire on the road. This time we are 52. Jusef's group also tried it yesterday. We divide ourselves into three groups for jumping over. We say good-bye. The moment has arrived. I see the nearby expression of Salim, he smiles and nods his chin at other side. The call to go. We will see each other over there.
Two cars have seen us. Four guards get out. They start with the rubber bullets. They sound like gunshots. Many more jeeps and cars are arriving. I have jumped the first fence trying to carry the ladder with me. They descend very fast and the steps are heard increasingly stronger. We jump the second fence. Everybody. Noisily.
The stairs lasted well. I see that Sam and Adama are bleeding. We look around before running. We are 6, where are Nipa and Nam? The dust settles. There are 2 bodies on the ground. I close my eyes to open them again and I see that they are alive. We go to them. They vomit blood. They shot Nam in the chest from a couple of meters away. Nipa does not speak but Arianne was beside him when the ball him in the stomach.
They arrive with rifles in hand. They have cornered us. We look at them but they do not see us. Nipa and Nam continue vomiting. Electrical discharges. I see that Nam stops moving. At least they're not hitting us. They begin to raise us off the floor: Get up! You hear me! Come, get up, black! They are going to have to drag them. Nipa still maintains open eyes and looks me. Nam is an inert body. They bring us down, they have opened the small door. Again by the small door. They leave us outside again. We hear the footsteps of the Moroccans and we run quickly, we run, we run. We hide in the night.

08.00h
It has been light for hours. We've been moving slowly from hiding place to hiding place. We go back for those left behind.
The inert body of Nam lies abandoned 50 meters from the wire. From afar I feel the pain travel through the body. I feel that I dwell inside. Images of the climb-over return. We are all shouting while we approach. Jusef's broke body is cold to the touch. We help him get up and, without thinking twice, we carry him to the camp between us.
Nassur the guinean says that the maroccon guards carried the dead body of Nipa away early in the morning. It hadn't been long since we ran to the forest. Perhaps they did not see the body of Nam, perhaps they thought that two dead persons were too many.

13.00h
We are going to ask for help in the city. Some calls that can verify what has occurred and to report it to the rest of the world. We need to be seen and heard. The dead persons are not invisible. All is rushing. Europe? Democracies defended by shots in the night. Sharp blades and blood on the skin of those of us travelling.

17.00h
In the camp the air is dense. We are sitting trying to find ways out. The body of Nam is at least protected, in the middle. The talk is of our beaten bodies. In fact, they shout. We look at each constantly, looking for answers. We are not going to let anybody die alone on this long path. They are not the dead of no-mans-land.
We take the inert body of our friend near the fence. They don't close their eyes, the damn guardians of the wall. There they are, hired killers of the powerful. We scream from our guts - Killers ! They watch us. Talking among themselves. - Killers!
The real guards arrive. They surround us. We go with them to report the night's dead. I saw everything. We have no choice. Now come the interrogations, and the malicious questions. Some ran away.