Over the past few years the UK parliament and government have led this country into war upon war, torn up age-old rights and made the division between rich and poor to grow ever wider. 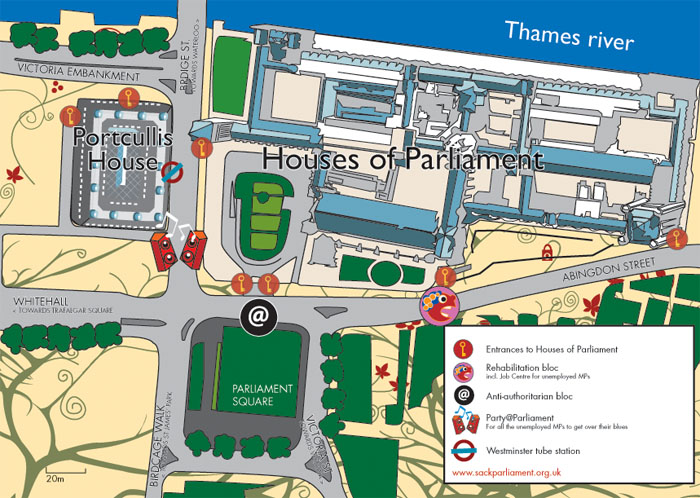 the map of the area

Attached is a map of Parliament Square marking out the entrances and where public blocks have said they're meeting. Below is all the information that has been posted to Indymedia about the event.

MPs and Lords return from their summer recess on October 9th. We need to ensure they can’t get back inside Parliament to stop them spreading their culture of fear.
Meet Parliament Square - 9th October - 1pm

Events on the day (as seen on Indymedia)
Anti-authoritarian block
"Taking inspiration from others who are taking action on the day London Anti-Authoritarians are calling for an anarchist bloc. We stand against all war and oppression, and see both the domestic war against 'terror', and the international wars against Iraqis and Afghanis, as being led by this government with the complicity of parliament." - 1pm Parliament Square

Critical Mass
"Let's take to our bikes, take the streets and stop this war and climate destruction." - 12pm under Waterloo Bridge

Party@Parliament
"We know how distressing it can be to lose your job. In this spirit we will be helping sacked MPs and Civil Servants get over their distress of being fired on Monday 9th of October with a Party@Parliament for them to boogie away their blues to."

Rehabilitation block
"A space for MPs to come find rehabilitation after all their years of war destroying, and community suppressing. We will be offering employment advice and support for all those sacked on the day." - 1pm Parliament Square

Training Day - Saturday 7th October - 10am-4pm @ LARC
A training day for people interested to learn and share skills. Workshops include:
Affinity Groups: What they are, how to organise one
Legal workshop: How the police might use their increased powers
Mass actions: How to engage effectively in mass actions
Medic/ trauma: Basic first aid for people on protests
Other group actions: Other action people might wish to take
Please bring food and ideas to share!

Training Day - Sunday 8th October - 10am-4pm @ RampART
A second training day, for those who missed the first. This is being held at RampART not LARC!

Other events over the weekend to go to!
Transnational day of action against migration controls
"A broad network of migration-related initiatives call for freedom of movement in a transnational day of action. In dozens of cities in Europe and also in Africa, manifestations and demonstrations are in preparation for 7th of October." 7th October - 12pm - Imperial War Museum
www.october7.org.uk/