These considerations are what shapes his own intervention and animate the new-found preoccupation of a host of former liberals and social democrats with the oppression of women by Islam—figures who one must anticipate will now come forward in Straw’s defence In contrast, working people must oppose all such attempts to whip up anti-Muslim prejudice and any and all proposals to curtail religious and civil liberties. This is an essential component of the struggle against militarism and war. 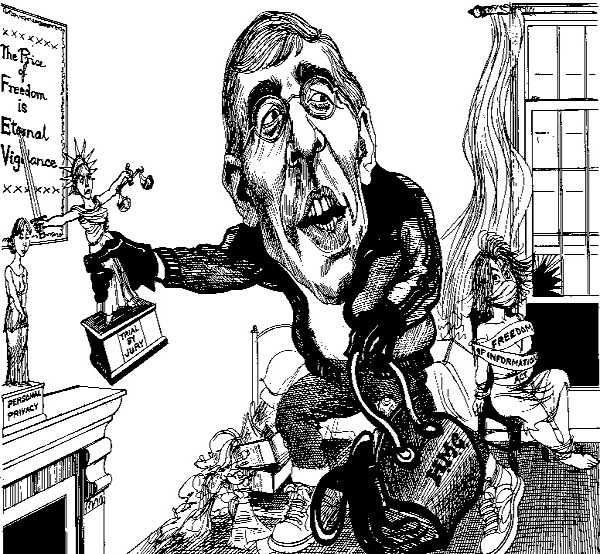 Attempts to whip up anti-Muslim prejudice

Only in a climate of deliberately cultivated hostility to Muslims could the comments by Jack Straw opposing women wearing the veil be described as a contribution towards a “debate.”

The article by Straw, the former Labour foreign secretary and leader of the House of Commons, in the Lancashire Evening Telegraph, a local newspaper in his Blackburn constituency, was a calculated provocation. It was an appeal to prejudice intended to solidarise Straw with attempts in government circles and the media to generate Islamophobia so as to justify Britain’s warmongering and attacks on democratic rights.

There was, in fact, no need for Mr. Straw to “initiate” a debate on the veil. Amongst Muslims, including Islamic scholars, there is no agreement on the veil—known as a niqab—and many oppose it. It is generally considered a cultural preference rather than a doctrinal issue.

When the subject has previously been discussed, debate has centred on whether or not wearing the veil is a choice freely exercised by women or whether there is an element of coercion. An overriding consideration has generally been an insistence on the freedom of worship.

Straw framed his column on entirely different grounds. He opposed wearing the veil because he personally dislikes it and claims that it prevents face to face discussions that are vital to ensuring social cohesion.

There was a calculated undertone of nationalism to Straw’s argument. He described meeting a man and his wife who are constituents. She was friendly, polite, respectful, and gave off “signals which indicate common bonds—the entirely English accent, the couple’s education (wholly in the UK).”

This jarred with “the fact of the veil,” which made him feel “uncomfortable,” he wrote. He decided that in future he would ask his female constituents to remove the veil when they came to his surgery because wearing it made “better, positive relations between the two communities more difficult”

There are, of course, personal political considerations involved in the publication of this column. Straw was replaced as foreign secretary by Prime Minister Tony Blair at the insistence of the United States. His constituency is 30 percent Muslim.

In March, US Secretary of State Condoleezza Rice visited Blackburn and reportedly told President Bush of her concern that Straw could not be trusted to take a hard line in the so-called “war on terror.” He had already expressed reservations on a military strike against Iran. Less than two months later, Straw was demoted from the Foreign Office to leader of the Commons.

With his column, Straw aimed to restore his political credentials in right-wing circles and to set out his stall for the upcoming Labour Party leadership contest. That he chose to do so by playing on anti-Muslim sentiments speaks volumes not only about the character of the Labour Party, but of the political climate it has created.

Straw knew that his smoke signals would be read correctly in the right quarters. His stance was immediately praised by Rupert Murdoch’s Sun.

His comments dovetail with the government’s claims to be waging a struggle for civilised values and democratic freedoms against religious extremism. Blair has described both his foreign and domestic policy as “part of a struggle between what I will call Reactionary Islam and Moderate, Mainstream Islam.” Home Secretary John Reid has lectured Muslim parents to guard against fanatics “looking to groom and brainwash your children for suicide bombing,” and at the Labour Party conference he announced to applause that he would not be “bullied” by Muslim extremists.

Straw’s decision to attack the veil, while making a point of defending the headscarf, or hijab, is in keeping with this type of propaganda His comments open the way not only for all manner of attacks on Muslims, but also for an intensification of the ongoing shift away from Britain’s traditional policy of “multiculturalism” in favour of the cultivation of a proscriptive “national identity.”

Straw’s article echoes other recent statements by government ministers that explicitly link opposition to radical Islam with pronouncements on the failure of multiculturalism. Communities Secretary Ruth Kelly has suggested that it encourages segregation, as has the Labour-appointed chair of the Commission for Racial Equality, Trevor Phillips.

There is no question that the policy of “celebrating cultural differences” has been utilised in the past to encourage divisions within the working class, and that this policy was championed above all by Labour. But the government’s sudden discovery of such problems is nothing but an attempt to justify a lurch to the right on questions of social policy and civil liberties.

Laws against religious discrimination are not examples of “British multiculturalism.” Freedom of worship is a fundamental democratic right and is enshrined in the Universal Declaration of Human Rights, drafted in 1948.

This states: “Everyone has the right to freedom of thought, conscience and religion; this right includes freedom to change his religion or belief, and freedom, either alone or in community with others and in public or private, to manifest his religion or belief in teaching, practice, worship, and observance.”

In the aftermath of the Second World War and the Nazi holocaust against the Jews, no one was in any doubt about the utterly reactionary character of attempts to impose a common national identity based on the whipping up of prejudice against religious and cultural traditions that others found objectionable.

These principles are now under sustained attack, with Muslims most often the immediate target and a convenient scapegoat to justify measures that can be later used against the entire population.

Across Europe, policies are being enacted against Muslims, such as the banning of the headscarf in France and certain German states, and even the denial of welfare benefits to veiled women in parts of Belgium Accompanying this has been the publication of cartoons portraying the Prophet Mohammed as a suicide bomber—justified as an expression of free speech—and demands by the European Union that laws be enacted to regulate what can be taught in mosques.

As in the 1930s, this attempt to poison social discourse by cultivating racism and xenophobia is bound up with a return to imperialist colonialism by the European bourgeoisie.

There are few men in the world today who have less right to initiate a debate on the rights of Muslim women or on social cohesion than Jack Straw. He should be bracketed alongside Blair, Bush and their ilk as war criminals and enemies of democratic freedoms.

These considerations are what shapes his own intervention and animate the new-found preoccupation of a host of former liberals and social democrats with the oppression of women by Islam—figures who one must anticipate will now come forward in Straw’s defence In contrast, working people must oppose all such attempts to whip up anti-Muslim prejudice and any and all proposals to curtail religious and civil liberties. This is an essential component of the struggle against militarism and war.