A relatively big march took place in Vienna today as part of the Oct 7 actions against migration controls [call]. It followed 2 other smaller actions in the city centre today (see report in German). Bellow is a timeline of the events.

14:30 (local time, UTC+2): People have started to arrive at the Hernalser Guertel detention centre, with banners, leaflets and slogans. There is some police presence already, and the detention center itself is barricaded all around (perhaps due to construction works). A big PA system is parked round the corner.

14:50: The assembly point and PA system have been shifted to near the main entrance so that it's more visible and audible from the main road. Some 200 people are already here. Things are being said and read through the loud PA system about detention and migration controls.

15:20 The march starts to move round the detention centre, shouting loudly so that detainees inside can hear them. Now it is heading, through the city, to another detention centre in another district.

16:17 The march is now in front of the Grey House, which's a criminal court and "investigation prison". It is famous for racism and bad treatment. It also holds the only hospital in Austria that force-feeds hunge-strikers. Speeches and slogans. Before that, the march had stopped for a while in the middle of Alser Rd, by the campus, where speeches and chants were heard.

16:27 Over 350 people were counted on the march, which is still outside the prison. A speaker is talking about a refugee who was in detention there, and due for deportation. He resisted the deportation and went on hungerstrike, for 38 days now, so he was moved to this 'hospital'.

17:00 The demo has been marching on for half an hour now, headed and followed by police vans and motorcycles. It is now reaching its final destination, a "police holding centre", which's also used as a detention centre. The PA system played nice reggae, and there are 3 or 4 megaphones chanting. The organisers had printed and distributed 1000 copies of the Crossing Borders newsletter in English and German, and 1000 copies of a 12-page infosheet in German.

17:30 The demo is almost over. We are standing in front of the "police holding centre", which looks funny as the building is under construction again. 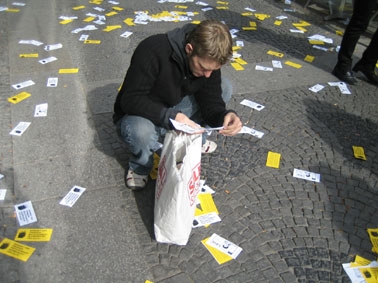 Passers-by picked up the leaflets of the exploded foreigners law

Further Actions on Oct. 7 in Vienna:
At 1pm the aliens law was symbolically exploded at Kärtnerstraße
- see report (in german):

In the centre of Vienna a "bouncy castle" was symbolising Fortress Europe for a couple of hours. No one was allowed to jump!
- see report (in german):

In the evening a video screening on the topic "marriage without borders" was presented by "underdo filmfestival". Many people came and watched the films.
- see announcement: