In the morning of Friday, Oct 6, 2006, activists have again climbed on the detetionships and blockaded the entrances by lock-ons. 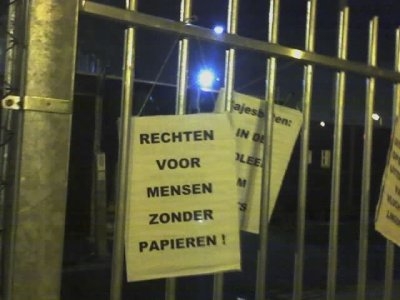 Sign on the gate i front of the Detentionship...

We want to stop the witchhunt against illigalised people and that this people get a normal life; so closed down all the detention and deportations centers and freedom for all this innocent people!

The action began about 06.00am: The main entrance got blockaded by for activists with help of lock-ons. On the same time two activists walked on the terrain with banners, two others activist climbed on the bridge of the deporationship.

Especially the climbers got loads of violent reactions of the guards. With batons the made staying on top of the bridge impossible. This resulted that one of the activsts got on a side of the bridge. Again the guards where trying to cut the climbing gear. This created a life threating situation. Only after the police said something about it, the guards stopped trying to cut the climbing gear and ropes. The activist had a hard time hanging on the bridge, but stayed on hanging on the bridge till 07.00am!

About that time, he was violently taken away by the police on a boat. The other activist was on the other side on the bridge, 07.10 am the police took him away as well.

The firebrigade came about 06.30am. About 07:30, the firebrigade started to cut the fence of the outside gate. This happened with allot of violent pushing and pulling by the police. Its was not simple for the firebrigade; four activist locked to the gate and as well to each other.

07:35 The fence is so damage that the firebrigade can lift out all the four activist at once. Still locked to each other they get rude pushed in a police fan. 7:45 The last police van leaves with the lasts activists. In total eight activist got arrest and brought to police station Marconiplein Rotterdam. The activist got loads of applauds of the people inside the deporationboats. Multiable times the activists could hear loads of noise of the boat.

The climbers got released after doing six hours of time. Their climbing equipment is confiscated.

Two of the lock-on activist released themselves out of the lock-ons. Two other activist decided not to let go the lock-on. This resulted as punishment that they where putt outside. All day it was raining and really cold. Multiable times the police threatened the activist to put pepperspray in their eyes.

The lawyer needed to help the activists out. In the night the activist where taken inside, to a cell without a mattress and only with one blanket. The four lock-on activists have been taken in to custody and stayed one day and one night in jail. Violent arrests, cutting life lines of climbers, pepperspray, fines or court cases will not stop us!

This is a scream for freedom witch shall not be silenced!

Pictures of the action and further information in dutch at: