October 7th: 'For freedom of movement and the right to stay'

As part of the Transnational Day of Action for Migrants on Saturday October 7th, members of Birmingham’s Anti-Racist Campaign supported by Birmingham NoBorders, gathered in Victoria Square to lay wreaths to commemorate those asylum seekers who have died as a result of government immigration policies. 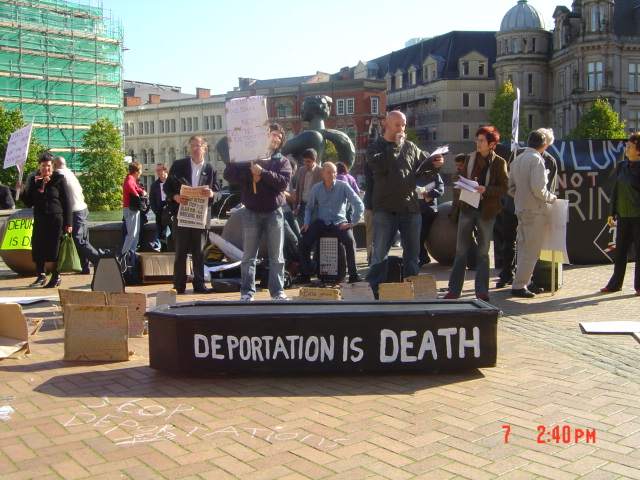 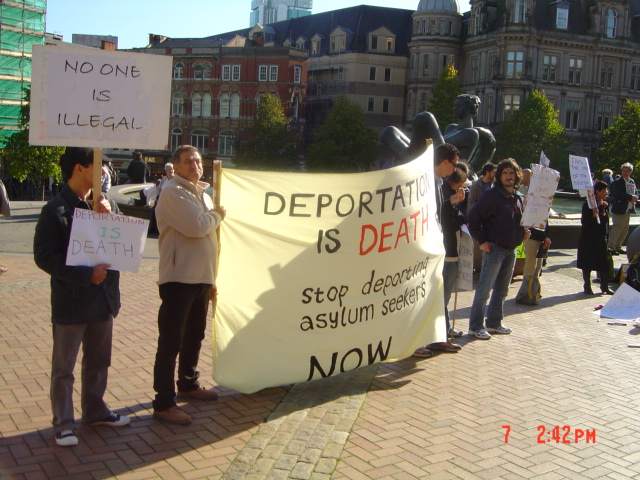 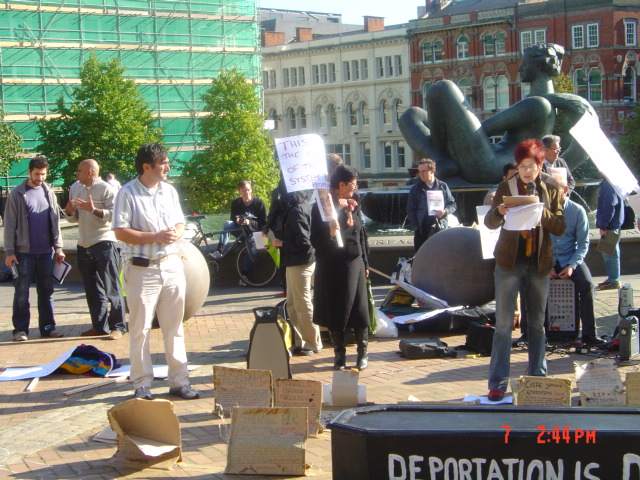 Under the government’s draconian legislation, thousands of asylum seekers are now being threatened with deportation in dawn raids more reminiscent of Nazi Germany than the UK.

Families with small children are being locked up in detention centres across the UK and men women and children are being subjected to repeated humiliating body searches and denial of the most basic civil rights. In desperation over 40 have committed suicide rather than be sent back to oppressive regimes around the world.

At the same time asylum seekers, many highly skilled, are denied the right to work and are forced to live on benefits that are 2/3 of that which the unemployed receive and the latter are under-supported. Some asylum seekers therefore have chosen to work in the illegal economy in order to survive.

This has resulted in gross exploitation and life threatening working conditions as witnessed in 2004 when 23 Chinese cockle pickers died in Morecambe Bay.

Birmingham is a multi-racial city, which has a proud record of welcoming migrants whether fleeing oppression or seeking a better future for themselves and their families. These include migrant workers fleeing the ruthless evictions in rural England in the 19th century, and Irish, African-Caribbean and Asian migration in more recent times.

Contrary to the media hype, refugees are not a drain on our economy. The government¹s own figures show the opposite is true: new arrivals make a net contribution to our economy, even when the costs of a massive immigration control apparatus is taken into account.

Facts about migrants in the UK:

Refused asylum seekers and many asylum applicants, who are normally from the global south, are frequently detained and/or electronically tagged. They are frequently deprived of the right to work, meaning they, together with visa over-stayers and trafficked people, are forced to work in the informal economy and/or in jobs which are dirty, difficult and dangerous for the lowest wages.

Many regular migrants who have entered the UK using "legal" routes or via accession are denied full employment and social rights. Non-EEA migrants will be subjected to the ID card before UK nationals and to surveillance at work and when they use public services.

For many developing countries such as Ghana and Bangladesh, remittances from migrant workers including those in the UK are very important to their national countries' economies and local people's survival.

Capturing lost taxation and other revenues could net the Treasury up to £1 billion a year more when set against the potential £4.7 billion cost of deporting the entire irregular migrant population (IPPR: 2006)

The UK is already holding more than 2,500 people who have not been convicted of any criminal offences, in immigration detention centres at a cost of more than £2 million per week. It costs £812 to hold a person in detention for one week, excluding overheads. Source: Asylum/Immigration [Cost of detention] House of Commons 16/06/06