Undercurrents are filming the Blockade of Faslane Trident base. 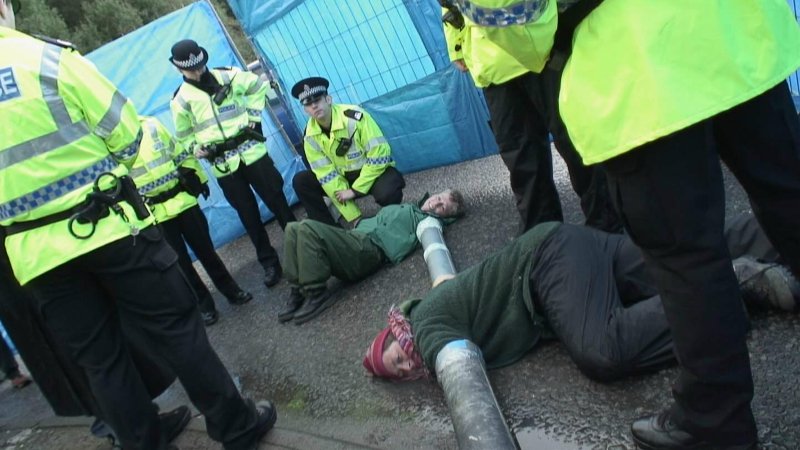 De chained in front of Faslane base

A grandmother of 3 was arrested near Glasgow at 9.00am this morning. De Murphy had chained her self with dozens of other people blockading the North gate of Faslane nuclear naval base.

Her action has begun a whole year of disruption at the Clyde nuclear weapons base. A video journalist from Swansea based Undercurrents productions filmed the blockade this morning for a documentary to be released in 2007.

De Murphy (50), a bookkeeper from Swansea was arrested along side Carol Anne Philliphs from Carmarthen. Their blockade created a three mile traffic jam of navy trucks, cars and administration workers. The base was shut down for 20 minutes until Police cut metal tubes and chains off the two.

Faslane 365, the coordinating group behind the planned 12 month blockade, have stated their aims on www.faslane365.org

‘Trident nuclear weapons should be taken out of deployment and the government makes a timetable for dismantling the weapons, together with a commitment not to develop any new nuclear weapons.’

Tony Blair is considering spending between £40 and £76 billion to keep nuclear weapons in the UK until at least the year 2055.

Notes to editors:
The Undercurrents video journalist can be contacted on location on 07970 161886 (Helen lles)

Photographs are available from