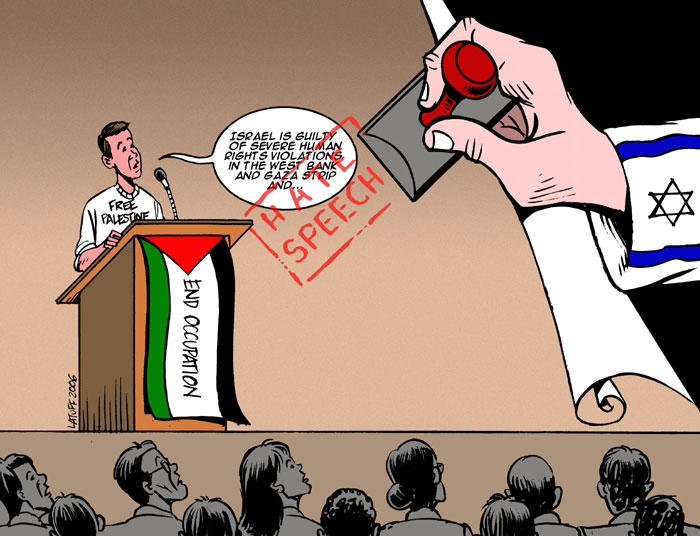 "Israeli supporters prowl the internet and the media shouting 'hate speech' not at those who actually hate, but at those who focus on the embarrassing truths Israel does not want Americans to think about while they pony up another few billions dollars. The good news is that Israel's supporters have screamed 'hate speech' and 'anti-Semite' so much that the phrases have lost their shock value, which means they have lost their value to silence...

...But if you want to see REAL hate in action, please read on.

1. 'There is a huge gap between us (Jews) and our enemies ­not just in ability but in morality, culture, sanctity of life, and conscience. They are our neighbors here, but it seems as if at a distance of a few hundred meters away, there are people who do not belong to our continent, to our world, but actually belong to a different galaxy.' Israeli president Moshe Katsav. The Jerusalem Post, May 10, 2001

3. '[The Palestinians are] beasts walking on two legs.' Menahim Begin, speech to the Knesset, quoted in Amnon Kapeliouk, 'Begin and the Beasts'. New Statesman, 25 June 1982.

4. 'The Palestinians' would be crushed like grasshoppers ... heads smashed against the boulders and walls.' ' Israeli Prime Minister (at the time) in a speech to Jewish settlers New York Times April 1, 1988

5. 'When we have settled the land, all the Arabs will be able to do about it will be to scurry around like drugged cockroaches in a bottle.' Raphael Eitan, Chief of Staff of the Israeli Defense Forces, New York Times, 14 April 1983.

6. 'How can we return the occupied territories? There is nobody to return them to.' Golda Meir, March 8, 1969.

7. 'There was no such thing as Palestinians, they never existed.' Golda Maier Israeli Prime Minister June 15, 1969

8. 'The thesis that the danger of genocide was hanging over us in June 1967 and that Israel was fighting for its physical existence is only bluff, which was born and developed after the war.' Israeli General Matityahu Peled, Ha'aretz, 19 March 1972.

9. David Ben Gurion (the first Israeli Prime Minister): 'If I were an Arab leader, I would never sign an agreement with Israel. It is normal; we have taken their country. It is true God promised it to us, but how could that interest them? Our God is not theirs. There has been Anti - Semitism, the Nazis, Hitler, Auschwitz, but was that their fault ? They see but one thing: we have come and we have stolen their country. Why would they accept that?' Quoted by Nahum Goldmann in Le Paraddoxe Juif (The Jewish Paradox), pp121.

9a. Ben Gurion also warned in 1948 : 'We must do everything to insure they ( the Palestinians) never do return.' Assuring his fellow Zionists that Palestinians will never come back to their homes. 'The old will die and the young will forget.'

10. 'We have to kill all the Palestinians unless they are resigned to live here as slaves.' Chairman Heilbrun of the Committee for the Re-election of General Shlomo Lahat, the mayor of Tel Aviv, October 1983.

11. 'Every time we do something you tell me America will do this and will do that . . . I want to tell you something very clear: Don't worry about American pressure on Israel. We, the Jewish people, control America, and the Americans know it.' - Israeli Prime Minister, Ariel Sharon, October 3, 2001, to Shimon Peres, as reported on Kol Yisrael radio.

12. 'We declare openly that the Arabs have no right to settle on even one centimeter of Eretz Israel... Force is all they do or ever will understand. We shall use the ultimate force until the Palestinians come crawling to us on all fours.' Rafael Eitan, Chief of Staff of the Israeli Defense Forces - Gad Becker, Yediot Ahronot 13 April 1983, New York Times 14 April 1983.

15. 'We should prepare to go over to the offensive. Our aim is to smash Lebanon, Trans-Jordan, and Syria. The weak point is Lebanon, for the Moslem regime is artificial and easy for us to undermine. We shall establish a Christian state there, and then we will smash the Arab Legion, eliminate Trans-Jordan; Syria will fall to us. We then bomb and move on and take Port Said, Alexandria and Sinai.' David Ben-Gurion, May 1948, to the General Staff. From Ben-Gurion, A Biography, by Michael Ben-Zohar, Delacorte, New York 1978.

16. 'We must use terror, assassination, intimidation, land confiscation, and the cutting of all social services to rid the Galilee of its Arab population.' Israel Koenig, 'The Koenig Memorandum'

18. 'We walked outside, Ben-Gurion accompanying us. Allon repeated his question, What is to be done with the Palestinian population?' Ben-Gurion waved his hand in a gesture which said 'Drive them out!'' Yitzhak Rabin, leaked censored version of Rabin memoirs, published in the New York Times, 23 October 1979.

19. Rabin's description of the conquest of Lydda, after the completion of Plan Dalet. 'We shall reduce the Arab population to a community of woodcutters and waiters' Uri Lubrani, PM Ben-Gurion's special adviser on Arab Affairs, 1960. From 'The Arabs in Israel' by Sabri Jiryas.

20. 'There are some who believe that the non-Jewish population, even in a high percentage, within our borders will be more effectively under our surveillance; and there are some who believe the contrary, i.e., that it is easier to carry out surveillance over the activities of a neighbor than over those of a tenant. [I] tend to support the latter view and have an additional argument:...the need to sustain the character of the state which will henceforth be Jewish...with a non-Jewish minority limited to 15 percent. I had already reached this fundamental position as early as 1940 [and] it is entered in my diary.' Joseph Weitz, head of the Jewish Agency's Colonization Department. From Israel: an Apartheid State by Uri Davis, p.5.

21. 'Everybody has to move, run and grab as many hilltops as they can to enlarge the settlements because everything we take now will stay ours... Everything we don't grab will go to them.' Ariel Sharon, Israeli Foreign Minister, addressing a meeting of militants from the extreme right-wing Tsomet Party, Agence France Presse, November 15, 1998.

22. 'It is the duty of Israeli leaders to explain to public opinion, clearly and courageously, a certain number of facts that are forgotten with time. The first of these is that there is no Zionism, colonialization or Jewish State without the eviction of the Arabs and the expropriation of their lands.' Yoram Bar Porath, Yediot Aahronot, of 14 July 1972.

23. 'Spirit the penniless population across the frontier by denying it employment... Both the process of expropriation and the removal of the poor must be carried out discreetly and circumspectly.' Theodore Herzl, founder of the World Zionist Organization, speaking of the Arabs of Palestine, Complete Diaries, June 12, 1895 entry..."