Police treatment of journalists in parliament square on monday

Aside from assulting and hospitalising NUJ photographer, Marc Vallee, fairly early on in the day, the police dished out some pretty uneven and dodgy treatment to other members of the press who had come to cover the events at parliament square.

Myself, I actually didn't have too much hassle compared to some other events I've covered. My only incident of any note was late in the day, after the protesters had dispersed. I was approached by an officer asking to see my NUJ card - no problem, I'd shown it to several during the day. As I pulled out my card one of the police photographers stole a sneaky snap of my face - again, no big deal, it had been happening all day. This time however, the officer who had looked at my card went off to huddle together with the FIT photographer and passed my details on to him to be recorded along with the photo he had taken. Dodgy, but I digress...

During the day about a dozen or saw assorted journalists, camera people, photographers etc found themselves inside the ring of police holding 'the bulk' of the protesters - either because that's where they wanted to be or because they got trapped there. I'm not aware of any of those being allowed to leave the pen in order to file their photos etc - unlawful but sadly not unusual dispite new guidelines issues to the police on treatment of the press.

Journalists outside of the pen were generally treated with some respect and apart from being hassled to move from places where you could actually see anything, they were generally allowed to get on with their jobs and not threatened with arrest for most of the day.

At one stage I heard a police office tell a courious onlooker that they needed a lawful reason to be present in the square and that they were either press or protester or shouldn't be there. It seemed that as far as they were concerned at that stage, there were only three types of people; police, press and protesters. However, that changed as time went on and eventually the police were ordered to hand out warning notices to everyone present, including the press, explaining that their presence was unlawful and they must move of face arrest.

Obviously journalists carrying out their jobs in parliament square, a public place, could not be commiting the offence of taking part in an unlawful demo and therefore not lawfully arrested but that didn't stop the police threatening to do just that. I saw several members of the press take these warnings, read them and then move away.

Worse still, I spoke to several of the journalist who had been inside the police ring. When they were finally allowed to leave along with the protesters (one by one over the space of a couple of hours) they were forced to give their names and address (plus show proof of ID). Apparently this was so that the police could report them for summons for an offense they could not actually commit., ie. taking part in an unlawful protest. Additionally, and this is the most worrying part of the whole thing, they were then told that they must leave the area or face arrest and were then escorted from the square!

These were not people taking pictures for indymedia but all NUJ members working for the likes of PA, Sky, Daily Mail etc. I hope the NUJ takes action on this soon as I'm sure it's getting worse not better. 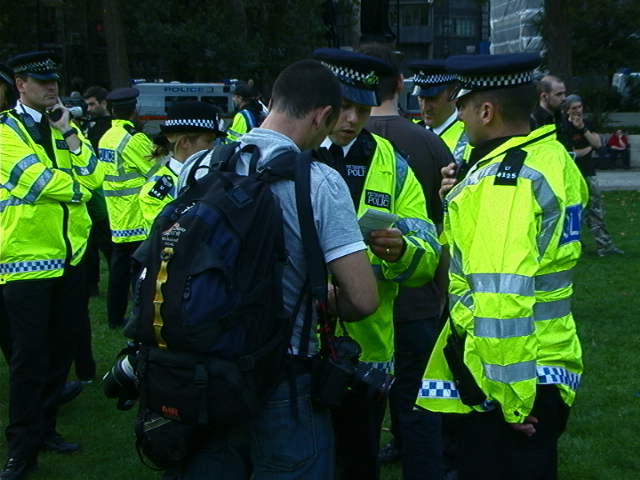 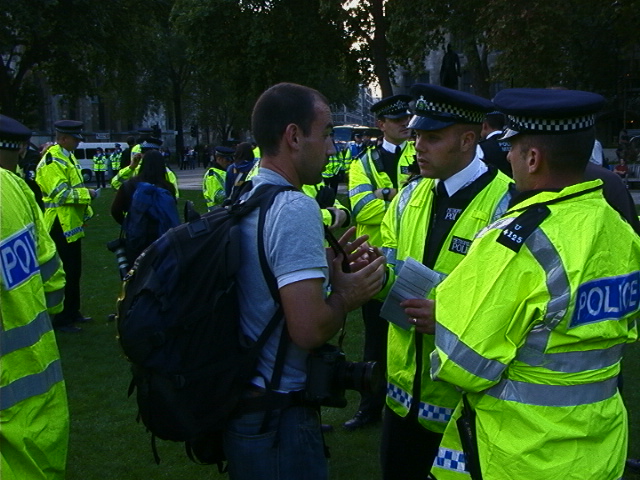 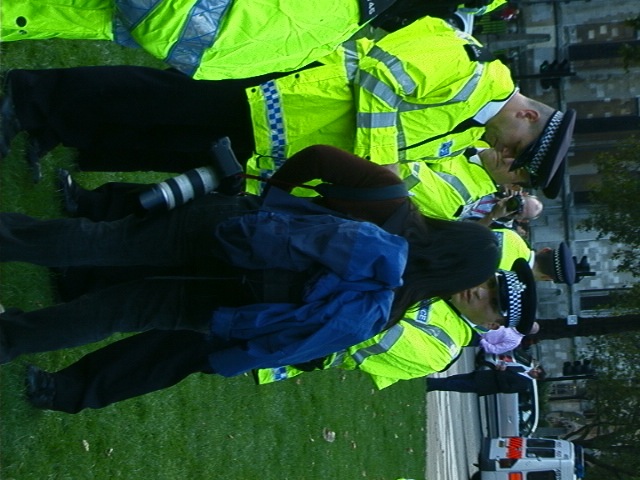 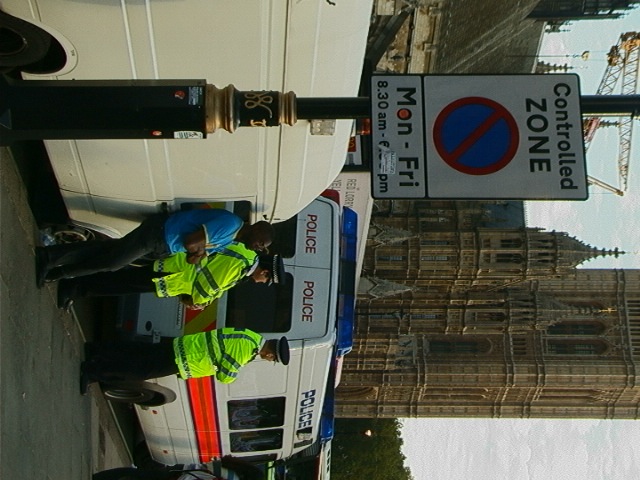 freedom of the press

The NUJ has expressed deep concern over the heavy-handed policing of a demonstration outside the Houses of Parliament yesterday (9/10) during which a professional photographer was injured. The union is gathering evidence to mount a possible claim against the police.

Marc Valleé was taking photographs in the vicinity of Parliament Square when he received injuries which resulted in him being taken to hospital in an ambulance.

Reports estimated that at least 800 police officers were on duty to police around 150 protestors, consisting of many anti-war and peace campaigners, as well as people who have been campaigning against the SOCPA no protest zone around parliament.

A number of arrests took place during the afternoon and some journalists were seen to be roughly handled by the police as they tried to push people back.

NUJ General Secretary Jeremy Dear, who happened to be in Parliament on union business, witnessed the protest and was shocked at what he saw.

He said: “There was a totally disproportionate police presence and an overly aggressive attitude towards around 50 people sitting on the ground.

“I spoke to one observer and asked was there anything we could do. She said, let people know what's going on. I complained to the MP I was meeting about the heavy-handed policing and stressed that the right to protest should be respected.

“The NUJ is appalled to hear of Marc’s injury and we are in the process of gathering evidence about the incident.”