On Friday 6 oct 2006 in the frame of the Transnational Day of Action for immigration, asylum and sans papiers' rights All African Women's Group, Global Women Strike and Payday Men's network organised a protest against deportation. 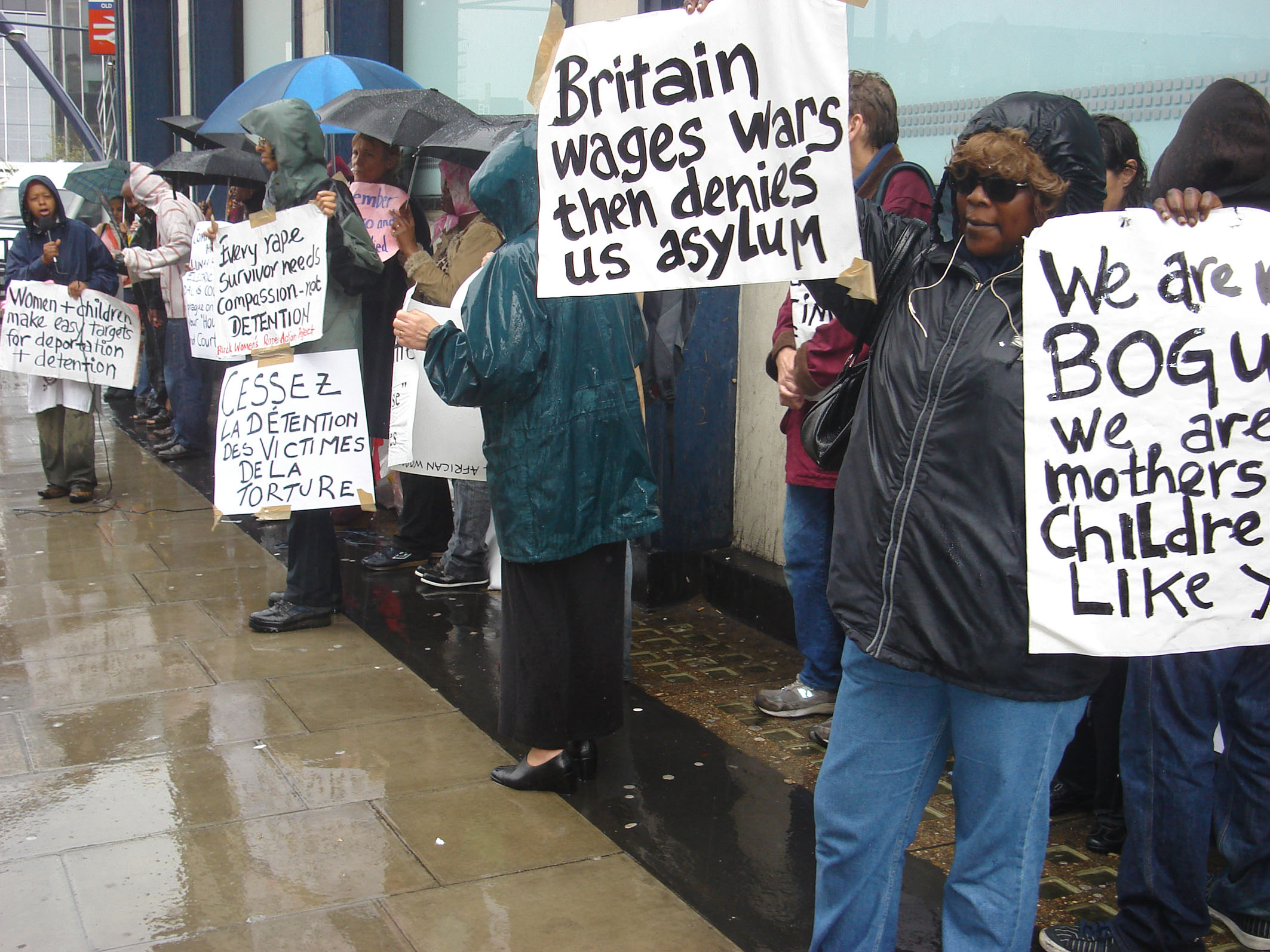 Despite torrential rain, a lively protest took place outside Communications House, an anonymous office block in central London, one of many “reporting enforcement centres” around the UK where thousands have to sign on with the authorities, and where many are snatched into detention. A huge banner: “Asylum Seekers – Paying the Price for Blair’s Wars”, and placards in Lingalla, French and English, spelled out how vulnerable women and children are targeted for detention and deportation, including survivors of rape and other torture, women with disabilities and ill-health, including those living with HIV/AIDS. Many are snatched in dawn raids and detained; many are handcuffed, or drugged and violently forced onto planes in attempts to send them back to the countries where their lives are in danger.

With a booming sound system, women and men asylum seekers and supporters sang, chanted and spoke out against this brutality. We highlighted the tragedy of Manuel Bravo, a father who took his life in detention after being refused asylum at a “hearing” where he was unrepresented and without proper translation. Speakers called for the judge who presided over this travesty to be sacked. We protested the widening industry of slum landlords, private security firms, charities and voluntary organisations that profit from lucrative contracts with the Home Office.

Passers-by stopped and took leaflets, including a local woman who had protested against the cruelty of vulnerable people being forced to queue for hours to get inside the building to report to the authorities. A Congolese father, due to be deported that day, thanked the picket putting a spotlight on the plight of asylum seekers; a young lesbian woman from Cameroon who just won her case, spoke of having fled persecution only to be locked up in Yarl’s Wood Removal Centre. Rape survivors are routinely detained despite Home Office guidelines against it. News of community organising in Glasgow uplifted everyone: led by women and their families, communities were turning out at 5am to block roads, preventing Home Office snatch squads from entering estates.

The picket was part of the 3rd Day of Action to defend immigration, asylum and sans papiers’ rights, and this year actions were transnational in over 20 countries, including in Africa. In 2004 women asylum seekers demanded to be visible in this movement: We look after and feed everyone, but our work and struggle is left out. If the rights of women are abused, so are men's rights. We women are not less political, but our politics are often more practical and concrete. We don't like abstractions, we like words and actions that speak about our situation and struggle for survival and justice. We are tired of men living off our hard work and then telling us that they are more political than we are."

The protest at Communication House, organised by the All Africa Women’s Group, Global Women’s Strike and Payday Men’s network, aimed at highlighting women’s contribution and demands in the movement against detention and for the right to move country. Black Women’s Rape Action Project, Fight Racism Fight Imperialism, Harlesden Methodist Church, HIV+ activists, No Borders, students from SOAS and other colleges, NCADC, Sack Parliament Campaign, Wages Due Lesbians, and Women of Colour in the Global Women’s Strike were among those taking part.

Asylum seekers, immigrants, and those of us with papers, organise together because increasing racism, sexism, homophobia and brutality meted out to asylum seekers, attacks us all. Far from stealing resources, people from the South have contributed for over 500 years. We demand that the Western military-industrial complex pay its debt to Third World people. Capital travel freely, why not people!

Resources: For “A Self-Help Guide against detention & deportation” by Legal Action for Women, buy online

http://www.allwomencount.net/Publications/pamphlets.htm, free to Asylum Seekers.
Asylum From Rape Petition launched this July demands official recognition of rape as torture and persecution: www.womenagainstrape.net or www.bwrap.dircon.co.uk
A “Bleak House for our Times”, the recent investigation into women’s rights violations at Yarls’ Wood Removal Centre, can also be ordered online.