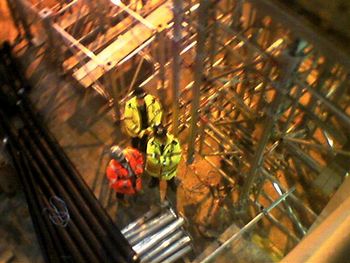 The protesters, who represented themselves in both courts, were originally sentenced to each do 100 hours community punishment and ordered to pay £300 each in costs, at a four-day trial at Horseferry Road Magistrates Court, split between July and October 2005.

At the original trial the protesters were presented by the prosecution lawyer as wanting to "emulate the tactics of Fathers4Justice", an accusation they categorically denied.

The crane occupations in November 2004 were intended to highlight the disgraceful way Laing O'Rourke was forcing its workers into accepting a new contract. Migrant workers who could not understand the complex legal jargon were called to an office one-by-one and told to sign the contract or be sacked on the spot, without being provided with a translation or time to get one for themselves.

It was felt at the time that Laing O'Rourke, then an advisor to the London 2012 bid, were introducing the new contract in order to lower wages to be more attractive as potential bidders for Olympic contracts, so it came as no surprise when the O'Rourke-led CLM consortium was chosen as the main Olympic contractor, a contract worth over £100 million to the company.

The Laing O'Rourke workers on the site had held two self-organised sit-ins in the their site canteen to demand that union representatives from the GMB be allowed on to the site. Public meetings were held to request support and it was at one of these that the plan to occupy cranes was formed.

As witnesses for the prosecution, managers from the CTRL site said that the occupation had caused £20,000 worth of disruption, which the magistrate used as the basis to return a guilty verdict, but the crown court judge accepted the protesters argument that having been asked to occupy the cranes by the workers themselves, they could not be guilty of intending to disrupt those same workers.

The head of security at the CTRL site, Mick Caldwell, claimed that he had spoken to the protesters on the day and they had told him: "We are WOMBLES, we are trespassing and we are here to cause maximum disruption to lawful activity." - which closely resembles the wording of the charge of Aggravated Trespass, and would have been tantamount to a confession.

Mick Caldwell also claimed that workers on the site only took action against the new contract because of "agitation by anti-capitalists including the organisation known as 'The Samba Band', essentially a support unit for the WOMBLES".

The protesters revealed in court that Mr Caldwell had essentially directed the police operation on the day, insisting that police not speak to the protesters and that they leave the site until the protesters came down of their own accord - knowing all along that he himself had told them that they could "stay as long as you like", while telling the police that they had been asked to come down and refused.

He was able to influence the police in this way because he had spent 31 years in the Metropolitan Police Force, eventually becoming a Chief Inspector in the notorious Public Order Unit, where he acted as tactical advisor to Operation Dursley, which saw thousands of people detained for 8 hours without food or water at Oxford Circus on Mayday 2001.

Knowing of his past by the time of the appeal hearing the protesters were able to use his previous position to their advantage, pointing out that he must have been aware of Section 69 of the Criminal Justice & Public Order Act 1994, which gives police the power to force people suspected of Aggravated Trespass to go elsewhere or be arrested, even if they are not guilty of Aggravated Trespass.

He appeared to take the presence of anti-capitalists at the King's Cross site very personally, and he had refused to give a statement to the police about the occupation, in an apparent attempt to ambush the protesters by fabricating a bizarre account in the witness box. Luckily for the protesters, the crown court judge realised he was not a credible witness, choosing to believe the protesters instead.

For more background on the dispute, and the crane occupation, see: