Shell petrol pumps shut down in Leeds in solidarity with County Mayo, Ireland

A Shell petrol station on Kirkstall Rd in Leeds was shut down this morning between 8am and 10am by local people in solidarity with people in in County Mayo, Ireland, who are currently fighting to stop Shell's disastrous and potentially deadly gas pipeline being built through the beautiful coastal village of Rossport. 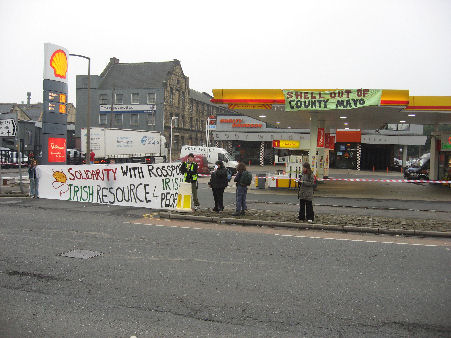 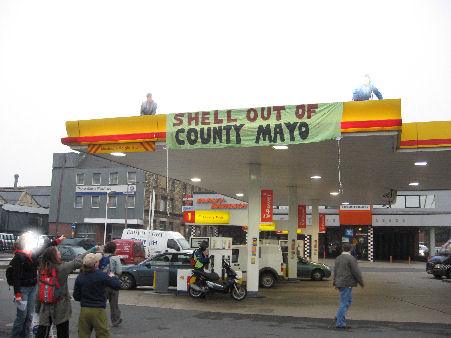 Fiddling on the roof 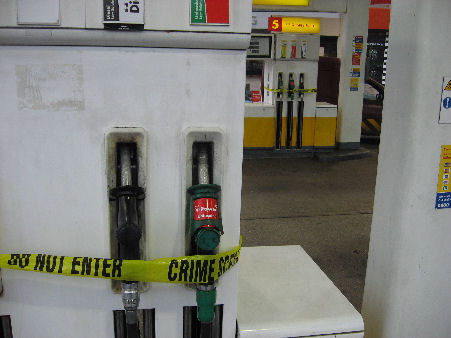 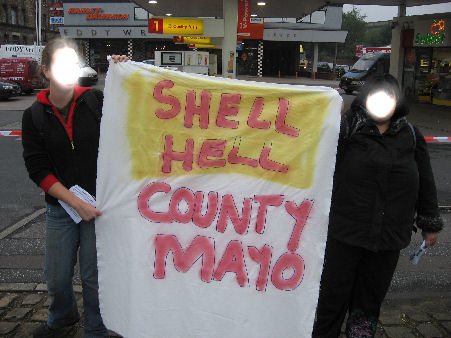 The protest comes in direct response to events last week (3/4 October) when Shell and at least east 200 Irish police forcibly removed local people to allow Shell workers back in to start work again on the gas pipeline and nearby refinery. A successful community blockade has stopped Shell working at the gas refinery site at Ballinaboy for the past 18 months. The campaign group in Rossport
‘Shell to Sea’ have called for groups across the UK to take action and raise awareness about what Shell are doing in their community.

In the words of one member of the campaign:

'After being stopped from recommencing work for a year and a half by a community picket, last Tuesday Shell, supported by large numbers of police, have managed to force their way back onto site. The area has effectively been occupied by police for the last three days. The Irish police have in effect become Shell's own private army of mercenaries. We are as determined as ever to stop this discredited project. This is a fight for survival.'

Campaigners in Leeds took up the call for international solidarity this morning. At 8am, they descended on an outlet of the unsuspecting climate killers, unfurling a green banner 'Shell out of County Mayo' from the roof of the store, before blocking off the main entrance with another giant banner 'Solidarity with Rossport: Irish Resources for Irish People'. All the petrol pumps were then put out of order with 'police crime scene' tape. Moments later, the station manager shut the shop and Shell was put out of business for a few hours. Campaigners leafleted passers by and motorists, got lots of supportive 'beeps' and were only abused with the classic 'get a job' 4 times.

The community in County Mayo is vehemently opposed to the pipeline as it pumps raw, high pressure gas within 10 metres of their houses. This is the first time a pipeline has been built with such high pressures and therefore Shell cannot guarantee the safety of the community. 5 local people have already spent 3 months in prison last year when they refused Shell access to their lands to build the pipeline.

In Leeds, people will be raising these important issues with the public at Shell's garages.

'This is the least we can do to show our solidarity with the people of Rossport. They are taking on one of the biggest multinationals in the world who is set on bullying them and using the police to intimidate them so they can get the hands on over £30 million of gas and oil reserves. This pipeline will destroy this pristine and beautiful coastal environment, and if built any accident would wipe out the whole village. We have to show Shell that they cannot do whatever they want - and that at some point our lives come before their hunger for profit.'

1. In Ireland, Shell is part of an oil consortium who owns the large Corrib field off the west coast – it has rights to all the profits from this area.
2. Shell are currently building an onshore gas pipeline from this sea gas field. The route of the pipeline goes through the coastal village of Rossport and then to the site of a proposed huge million hectare refinery nearby at Ballinaboy. From there it will link up with the European energy network and be pumped all over Europe.
3. This pipeline, known as an upstream pipeline, has no precedent anywhere in Europe. It’s an experiment imposed on the people of Rossport. Its operating pressure will be up to 345 bars – that’s four times higher than normal recommended.
4. There will also be electric cables in the same trench as well as chemicals like
methanol – this potentially deadly pipeline passes within 10 metres of the nearest house. Shell won’t refine the gas at sea as they say it’s too costly.
5. The whole thing is also build on peat, and there is already evidence of sinking.
6. Shell obtained a compulsory acquisition order which permits them to acquire land to build the pipeline without permission of the owners.
7. When five local men refused Shell access to their lands in Jan 2005, Shell obtained a High Court injunction against them. When they broke this injunction to stop Shell’s work, the five were imprisoned for more than 3 months.
8. The community has mounted a strong campaign against Shell. A picket of local people has stopped Shell entering the refinery site to restart work for 18 months. But last week, Shell re-entered the site using extreme force backed up by 200 police.
9. It is clear why Shell are so committed to building this pipeline – there is an
estimated £30 billion of oil and gas in the Corrib field. The people of the area are fighting for survival against a multinational who will stop at nothing to build this pipeline.
10. for more information see: