Australian Wheat Board “oil for food” inquiry ends with threats

While the Australian media and the opposition Labor Party have happily promoted the AWB “scandal”, neither has raised any connection between the affair and the Howard government’s sordid calculations in the lead-up to the Iraq invasion. Their silence again demonstrates the complicity of the entire political and media establishment with the criminal invasion and occupation of Iraq, and the violent drive of the Bush administration to seize control of its resources. 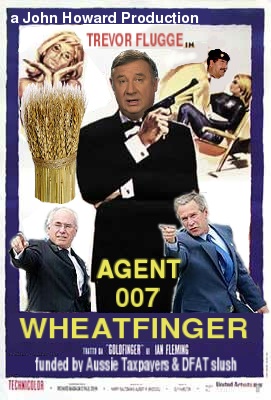 The affair and the Howard government

The Cole inquiry into the Australian wheat marketing agency AWB Ltd’s involvement in the so-called oil-for-food scandal concluded its hearings on September 29 amid further damning revelations of the company’s $300 million payment of bribes and kickbacks to the former Iraqi regime of Saddam Hussein. The material uncovered in the course of the nine-month investigation proved that the Howard government knew and endorsed AWB’s activities, and shed further light on the venal motivations behind Australia’s role in the 2003 US-led invasion.

The final week of hearings was dominated by bizarre claims that senior AWB executives could be prosecuted on terrorism charges. Senior counsel assisting the Cole inquiry, John Agius, raised the possibility after the release of an internal AWB email discussing a request from the Hussein regime for assistance with building 100 concrete bunkers. “The bunkers will have cement walls and floors so they are actually designed for burying the Kurds—under the cement?” AWB manager Darryl Borlase wrote to a colleague. “They intend to build them with fumigation capability so the mind boggles as to whether they are fumigating insects or any other pest that pisses them off.”

The Sydney Morning Herald described the alleged connection with anti-terror laws: “Under changes to the [criminal] code introduced in 2002, it is an offence to provide funds to a terrorist organisation. A terrorist organisation is defined as one that ‘supports terror’. Saddam’s regime is reportedly responsible for numerous outrages against its Kurdish ethnic minority, including the use of chemical and biological weapons.”

Borlase’s email—which was described as an attempt at black humour—certainly underscores the cynicism of AWB’s operations in Iraq, but to suggest that it constituted proof of “terrorism” is absurd. That the Cole inquiry raised the possibility of terrorism charges demonstrates the sweeping scope of Australia’s draconian anti-terror laws, which cover a series of activities that have nothing to do with what is generally understood by the term “terrorism”.

What is behind this extraordinary threat directed at AWB executives? One possibility is that it is intended as a warning to the wheat board’s management to keep their mouths shut regarding the government’s role in the affair. The inquiry’s findings, due to be handed down on November 24, are widely expected to include the demand for criminal charges against some of AWB’s senior staff. The threat of terrorism charges may act to deter any executives who might conclude that since they face imprisonment on possible charges of theft, corruption, and perjury, senior government ministers should go down with them.

In any case, the furore served to divert scrutiny of other internal AWB documents that were released, which underscored the government’s complicity in the affair. The media ran sensationalised reports, with one headline reading, “AWB linked to Iraq gas chamber”.

Earlier this month, the Federal Court forced AWB to release more than 900 documents that the company had attempted to suppress on the grounds of lawyer-client privilege. The court rejected AWB’s position, insisting that legal privilege did not extend to communications that facilitated a crime or fraud. “This principle extends to trickery and shams,” the judge declared. “Where a client is engaged in fraudulent conduct, communications with his or her lawyer are not privileged, regardless of whether the lawyer is party to the fraud or not.”

One of the documents implicated Warren Truss, former agriculture minister, now trade minister. In a letter drafted on April 5, 2000, AWB executive Mark Eamons wrote to Mohammed Medhi Saleh, Iraqi agriculture minister, assuring him that AWB chairman Trevor Flugge had discussed the wheat board’s arrangements with Truss, and that these arrangements would continue as usual. The letter was written amid increased scrutiny of Australia’s wheat contracts from American and Canadian wheat growers and UN pressure over AWB’s payment of bogus “trucking fees”, which concealed the bribe payments. Truss has denied all knowledge of AWB corruption.

Other documents pointed to Robert Hill, former defence minister and current Australian ambassador to the UN. Hill is a close personal friend of Norman Davidson-Kelly, head of the oil company Tigris, which worked with AWB in Iraq. Through a series of dubious arrangements, the details of which remain unclear, Tigris was allegedly created by Davidson-Kelly to recover a $US8 million debt owed by Iraq to his former employer, BHP. The money was paid via AWB through an artificially inflated wheat price. Hill told the inquiry that he and Davidson-Kelly had a “longstanding friendship” based on a common interest in Middle East politics, but denied ever discussing Tigris’s affairs in Iraq.

The Howard government has determinedly stuck to its story that it was completely in the dark about AWB’s arrangements. Howard, Downer, and former trade minister Mark Vaile all testified that neither they nor anyone else in the government had been briefed on the kickbacks, and that no-one in their respective ministries had drawn their attention to the 21 official cables, dating back to 2000, which warned that AWB may have been in breach of UN sanctions regulations.

The terms of reference of the Cole inquiry were carefully drafted and restricted to ensure that only AWB management would be investigated. The findings will not deal with the Howard government’s role in the affair. The official investigation itself was created by the government to contain the damage caused by the UN “oil for food” investigation’s finding that AWB had been involved in corruption, and, above all, to suppress any examination of the underlying political issues raised by the scandal.

Australia’s participation in the US-led “coalition of the willing”, which invaded Iraq in 2003, had nothing to do with weapons of mass destruction, terrorism or liberating the Iraqi people. The Howard government was primarily driven by a concern to bolster the country’s strategic alliance with US imperialism; particularly in order to secure the Bush administration’s backing for its aggressive interventions in the south Pacific. This dovetailed with Howard’s drive to preserve Australia’s domination of the Iraqi wheat market, worth $US2.3 billion between 1997 and 2003. Canberra was well aware that those countries not on board the Bush administration’s drive to war would be locked out of this lucrative market.

While the Australian media and the opposition Labor Party have happily promoted the AWB “scandal”, neither has raised any connection between the affair and the Howard government’s sordid calculations in the lead-up to the Iraq invasion. Their silence again demonstrates the complicity of the entire political and media establishment with the criminal invasion and occupation of Iraq, and the violent drive of the Bush administration to seize control of its resources.