The Racist 'War on Terror'

If the 'war on terror' were really about stopping terror, then you would have thought that, when the largest ever haul of bomb-making chemicals, rocket launchers and a nuclear biological suit were found by police at a house in Lancashire, the suspect would be interned for 90 days, the story would make headlines for days, and they would be assumed to be guilty. Well, that's what you would expect if the suspects were Muslims.

But in this case, they are white nationalists; one of the two was the BNP candidate for the Vivary Bridge ward of Colne last May. So the police assumed he was innocent: "He's not a terrorist and it's not a bomb factory", Superintendent Neil Smith said, reassuring residents. He has been charged under the Explosives Substances Act 1883 and remanded in custody, and is due to appear in Burnley Crown Court on October 23rd. The second suspect was released without charge. 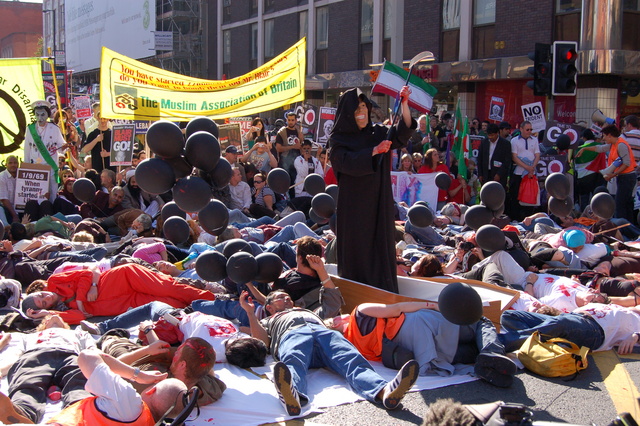 from the Labour conference protests in Manchester, Sep 2006

The contrast between the media coverage of all the phony terror cells and this incident couldn't be more stark; there has not been one mainstream media report of this real terrorist cell. It was only reported in some local media:

So far (12th October 2006), the only media reports that could be found via Google News about this story are these (none of which is from the national media):

So, even if this story is now to be picked up by the mainstream media, it would only be because of the attention given to it by bloggers and the alternative media, and not because the 'war on terror' isn't a racist sham.

Un-official military discussion board thread on this story:

I mentioned earlier that I contacted the police for their official line. On my second mail (today) I recieved a fast response which I have included below.

Thankyou for your enquiry and I apologise for not responding sooner.

I am limited as to the information I can give to you as you may be aware that two people have been charged and are now awaiting trial.

What I can tell you is that on Thursday 28 September, the police received information that led to the search of a house on Talbot Street, Colne. During that search a number of different chemicals were found, along with large stores of food. I can't comment on the size of the 'haul' as there isn't a precedent to compare against. The exact quantity will be made public during the trial.

Some military style casings were also found and these have been wrongly described in the media as 'rocket-launchers', which they are not. The suits that have been described are similarly not as you would imagine and you could easily buy these at specialist outdoor clothing stores.

The occupant of the house, Robert Cottage, was arrested and later charged with possessing explosives with no lawful object under the Explosives Act 1884.

The search of this house led us to search another house in Trent Road in Nelson - this happened on Monday 2 October. David Jackson, was later arrested in Lancaster in connection with the investigation and subsequently charged with the same offence.

Enquiries into this investigation are very much still underway and both men are due to appear at Burnley Crown Court on Monday 23 October.

I hope this answers some of the questions you may have, and offers some reassurance.
Please don't hesitate to call me if you wish to discuss this matter.
Regards
Liz