Hold your own "solo protest" in solidarity with Fairford Coaches case! 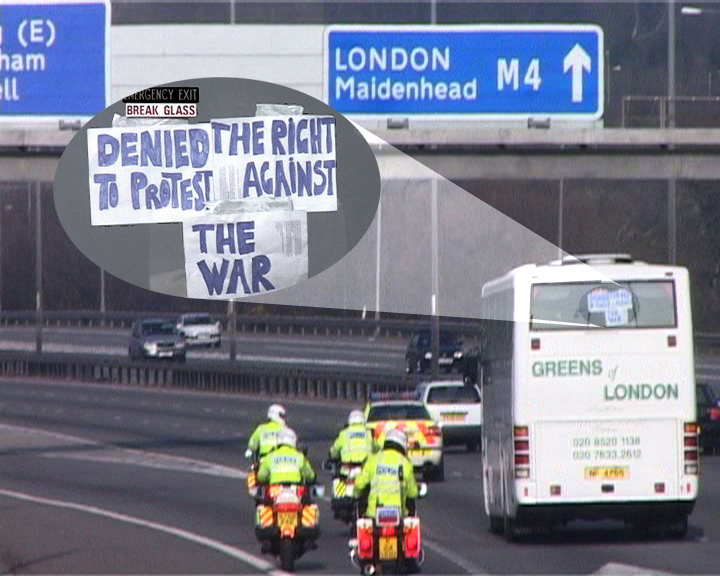 Signs in the coach windows during the detention.

On 22 March 2003, police detained and forcibly escorted 120 coach passengers back to London in order to prevent them from reaching a lawful demonstration at RAF Fairford. Although no crimes had been committed by passengers, police maintain the 2 ½ hour detention en-route to London was entirely proportionate and reasonable. The case against the police reaches the House of Lords on Monday 23 October.

Show your solidarity by holding a solo demo in Parliament Square for an hour!

Ok! I want to show my solidarity. So, how do I do hold a solo demo?
To comply with the controversial SOCPA laws, you must complete an application for your demo (get forms online or from Met police stations)

Applications for solo demos must be submitted to a Met police station as soon as reasonably practicable. They will only be legal if submitted before 9am on Sunday 22 October.

Can I demonstrate legally if I forget to apply?
Yes, in such cases, you are welcome to join the mass protest in Parliament Square on 23 Oct 06 (9.30-10.30am). This group protest is being arranged by the "I'm-looking-for-justice-in-the-House-of-Lords!" organisation.

Note: Due to SOCPA laws, any solo demos that don't apply for permission by 9am on Sunday 22 October run the risk of arrest.

For info on the Solo Demos, visit www.fairfordcoachaction.org.uk/events/solodemo

According to the Fairford Coaches website the deadline for those who want to get permission to demonstrate legally is Tuesday October 17.