Inspired by the camp for climate action, 40 people protested outside a Hummer dealership in Manchester about the environmental impact of SUV emissions which are contributing to climate chaos. 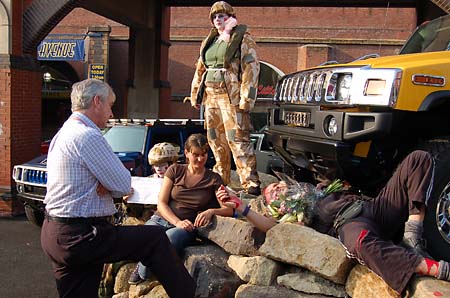 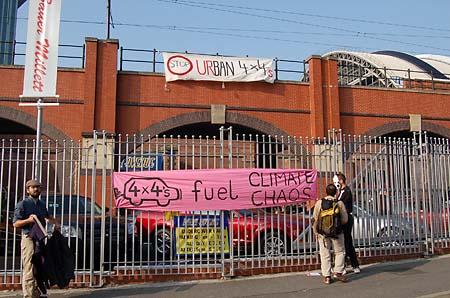 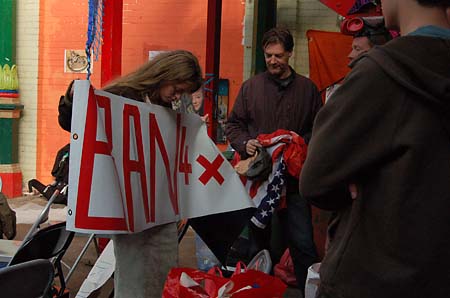 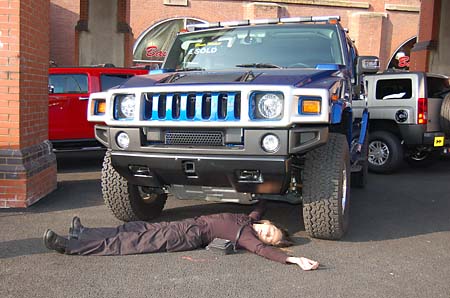 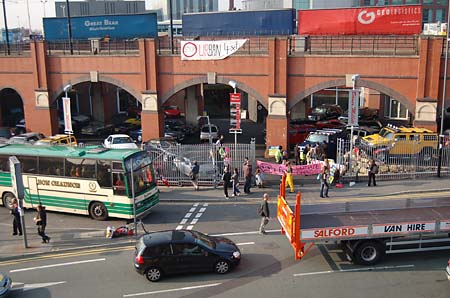 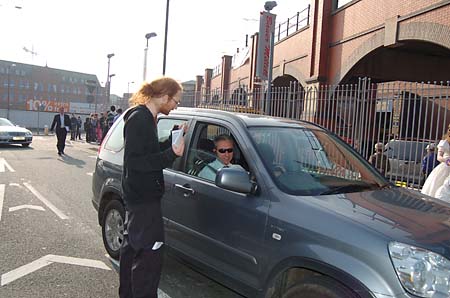 On the 16thof October around 40 individuals inspired by the camp for climate action shut down the Bauer Millettes hummer dealership in Manchester town centre.

The eco-activists fresh from helping to plan the next climate camp headed down to the SUV garage in various states of attire to highlight the link between our unseasonably warm weather and the emissions of the polluting 11 miles per gallon SUVs.

We began with a couple of women dressed as yuppies who went in and posed as potential buyers. They were informed by the dodgy car salesman that although the new Hummer 3 was technically classified as a Heavy Goods Vehicle it still fitted into some large parking spaces. Then the first of our “real” activists arrived and started telling our Yuppies why not to buy these vehicles of mass destruction.

A banner saying “Stop urban 4x4s” was then dropped from the tram bridge overhead. Several others then entered the forecourt and attached themselves to the front of the obscenely large vehicles, one lay covered in fake blood a casualty of the killer hummer. The other activists dressed as clown soldiers, pixies, a gas-masked bride, Tony Blair, a skeleton, Marylin Monroe with a half burnt American flag, the yuppies and various generically-modified hippies infiltrated the garage then bounced around the £50K+ luxury soft tops and SUVS.

A police motorcyclist then turned up on the scene and promptly called for 3 tactical aid units. The main concern of the 15 odd Police that turned up was not the protection of our planet for the future generations but wasting taxpayers money protecting these bourgeois assesories from scratches.

We had D-locked the electronic gates open so we could move in and out freely but after an hour and half the police turned up concealing their new specialised hydrolic cutting equipment and promptly cordoned off the whole gate. They did a good job of helping us to stop people from buying these vehicles. We continued to demonstrate and hand out flyers to the public and a special certificate to people who drove past in SUVs congratulating them for destroying our planet. We tried to keep the typically unresponsive police entertained with discussions about the complexities of the climate crisis.

We raised awarness of the link between the fact that all vehicles, but SUVS in particular, are a very significant contributer to climate chaos. We helped the police stop the selling of these killing, destructive machines. We handed out flyers to hundreds of people and managed to knock the hats of no less than 7 police officers as they passed under our banner.

It was agreed by all involved that we would not cause criminal damage on this action, resulting in no arrests, in what was a very easy to organise and effective action.

Hummer dealership is in fact Bauer Millett, the UK's only official Hummer murder weapon seller.
Many on the protest were protesting about 4x4s per se, not just urban ones; distinction is a bit of a red herring!
Another website on the leaflet handed out was suvsuck.org
Though good national & local press work was done, there was very little interest.

Some other 4x4 local news:
The new rising bollards in Manchester town centre that only let buses through, at a traffic 'accident' black-spot, have claimed some more cars including a 4x4! When cars ignore all the signs, luminous & audible warnings, and tailgate buses through, they get shafted (quite literally) by the rising bollards!

On Monday there was also a 4x4 protest at a Cheshire school, organised by Manchester FoE, about their use on the school run.

And a nice article & picture about fungus causing a tree to crush a car completely, for all you car lovers, at