What lies beneath Shell's Wild Lie?

Guests arriving at the Wildlife Photographer of the Year Award opening ceremony tonight filed past a greenwashed oil executive, an angry orangutang, a languishing tiger and a wandering photography exhibition – all bent on ending Shell’s sponsorship deal with the Natural History Museum. 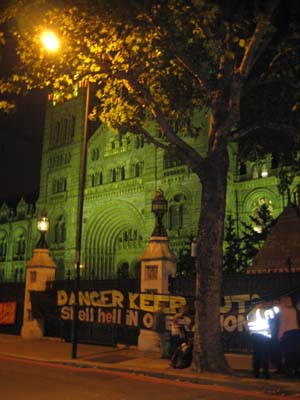 Kick Shell out of the Natural History Museum 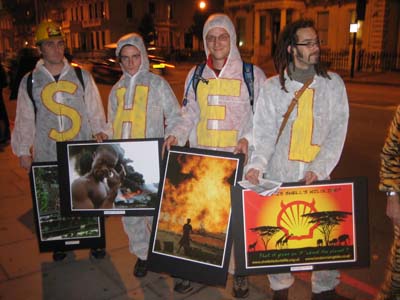 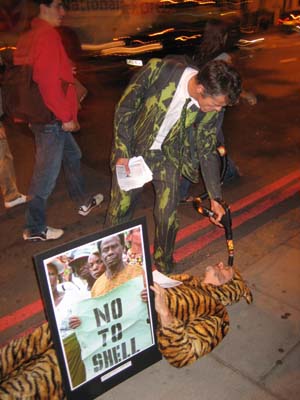 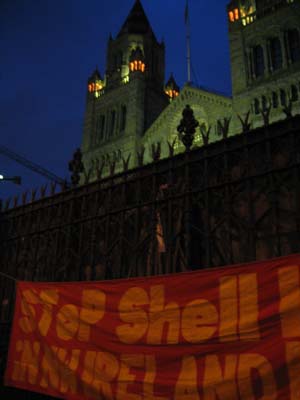 Kick Shell out of Rossport 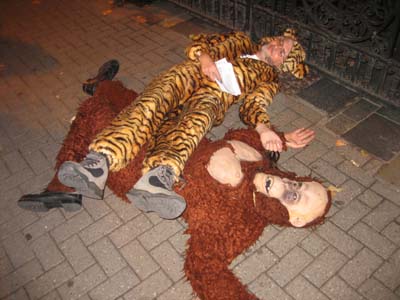 Tonight saw the opening of the Shell-sponsored Wildlife Photographer of theYear Award at the Natural History Museum. As guests began to queue up outside the main gates, London Rising Tide (never one to miss an oily-arty opening) turned up armed with banners, boiler suits, animal costumes and our very own Shell Wildlie counter-exhibition. Avoiding the now ever-present protest pen system, a gigantic ‘Danger Keep Out Shell Hell in Operation!’ banner was unfurled and tied to the imposing front gates. The animals held a die-in to highlight the tragic irony of a monstrous oil company sponsoring an award designed to celebrate rather than decimate the natural world. And the rest of us mingled with the crowd, handing out leaflets and forming a roving display of photographs of oil and climate-change affected communities and ecosystems around the world (see www.artnotoil.org.uk).

It was a pleasant and refreshing experience to find so much support from the assembled crowd, including photographers and museum staff and members. Many agreed to register their disgust once inside the museum, and to sign up to our statement opposing the sponsorship deal (to sign up, go to

Find out more and get involved in the campaign at www.londonrisingtide.org.uk

Shell is the third largest oil company in the world.
It is also the new sponsor of the Natural History Museum’s Wildlife Photographer of the Year exhibition.

Could you sign on to a statement opposing this sponsorship?

1.) Sign on to this statement which we will publicise online to help build the pressure on the Natural History Museum (NHM). (Please send your name to us at

‘Despite attempts to ‘greenwash’ its reputation via blanket advertising and cultural sponsorship, Shell is still heavily implicated in producing ever-greater quantities of the oil and gas that are destabilising our climate to such an alarming degree. Climate change is set to wipe out millions of plant and animal species, and to devastate the poorest regions of the planet. Shell’s activities also result in oil spills which are major causes of death and destruction for many varieties of marine life. Lastly, Shell is currently constructing a massive development at Sakhalin Island in Russia which is threatening the survival of the Western Pacific grey whale.

For all these reasons, Shell should not be sponsoring the Wildlife Photographer of the Year exhibition. We call on the Natural History Museum to end its sponsorship deal with Shell.’

2.) Help get the word out, either with more copies of our postcard, or by contacting people – particularly photographers – who might be up for helping out or contributing images. That work could be images of wildlife affected by oil or threatened by climate change, or of communities directly affected by Big Oil.

It’s our view that oil is a curse that fuels wars for resources like that now being waged at such a high cost in Iraq. It is also the greatest cause of climate change, which is a worldwide emergency and could result in the death of 400 million people, mostly in the poorest countries of the world (according to the government’s Chief Scientist). This emergency is certain to result in the extinction of millions of plant and animal species. Oil spills are also major causes of death and destruction for many varieties of marine life, including some that are already endangered.

Shell’s core - and growing - business is rooted in oil and gas production. It seems to have decided that pumping a tiny percentage of its profits into sponsoring places like the Natural History Museum (NHM) will divert your attention from this globally suicidal fact…

…which is hopefully where we come in, pointing a spotlight at the growing gulf between what they say (a language known as ‘greenwash’) and what they do. We will keep at it until Shell is no longer welcome in the NHM.