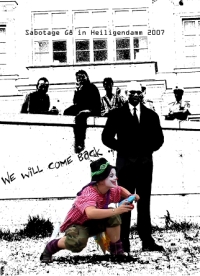 In this workshop we will investigate and critique the principles underlying capitalism. The basis of such an investigation is the assumption that phenomena such as poverty, climate change or racism are symptoms of capitalist society.

This presentation will look at the possibilities of large-scale direct action against the 2007 G8 in Germany. What critique of capitalism informs our actions? How can we understand left-wing political discourses in Germany?

Everywhere The 4th World War screens it has an immediate, visceral impact. It has become a powerful tool for organizers, bringing home global movements and conflicts to local communities. From the front-lines of conflicts in Mexico, Argentina, South Africa, Palestine, Korea, 'the North' from Seattle to Genoa, and the 'War on Terror' in New York, Afghanistan, and Iraq. It is the story of men and women around the world who resist being annihilated in this war.

DJ Dom (Blood and Fire) and other DJs will fill Lost and Found with the sounds of experimental electronic music. Until late.


The Lost n Found is a squatted social centre in Manchester’s Northern Quarter. It’s a space to create, inspire and learn…to meet new people and share ideas. It’s a space that’s ours, a place to escape from the stresses of everyday life and to get together and build our own realities and dreams. Radical Art, Vegan Kitchen and Bar included.