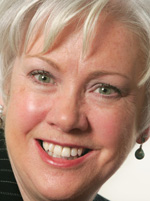 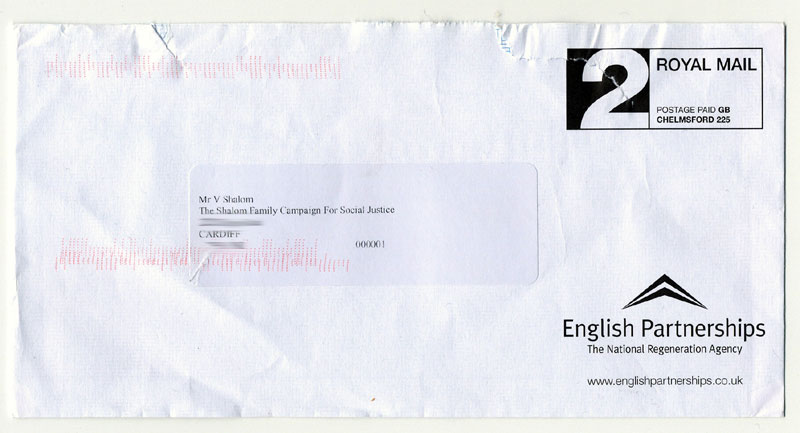 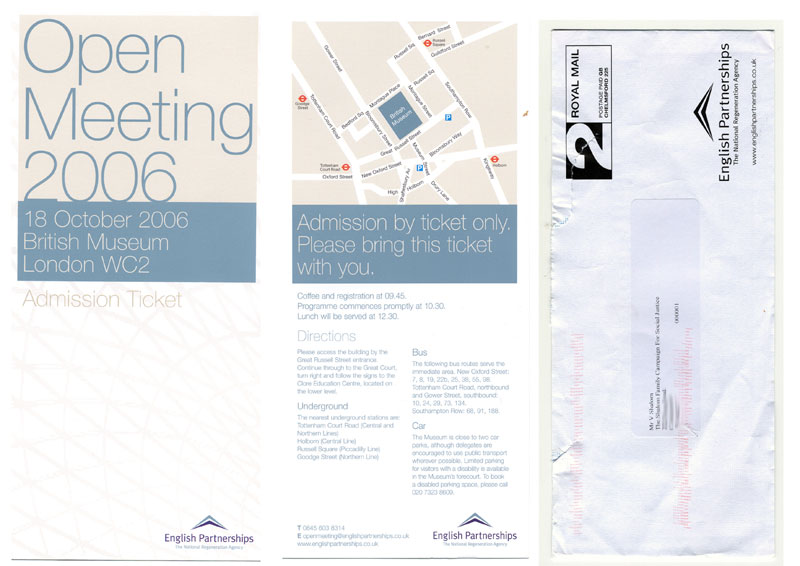 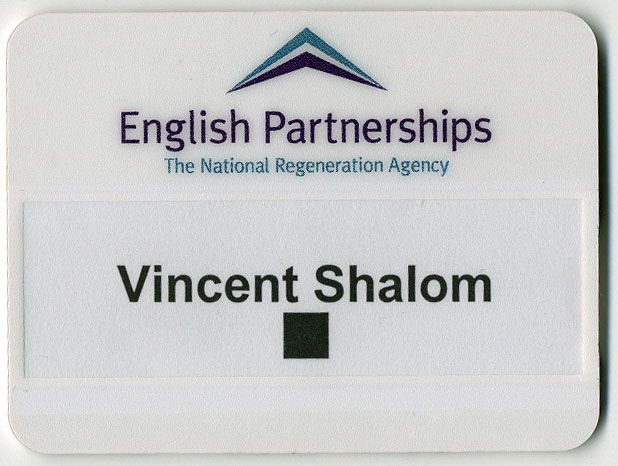 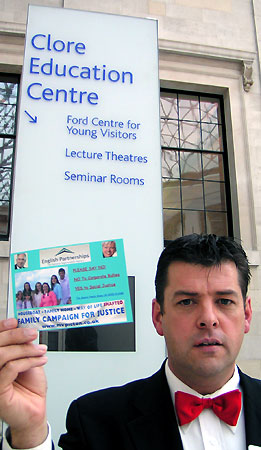 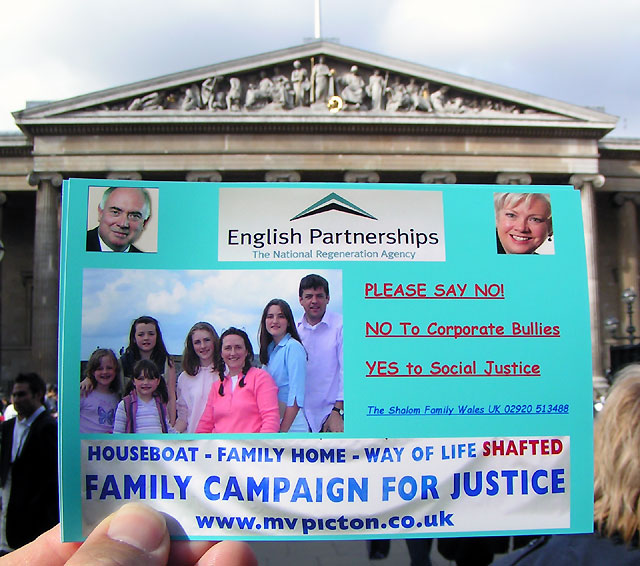 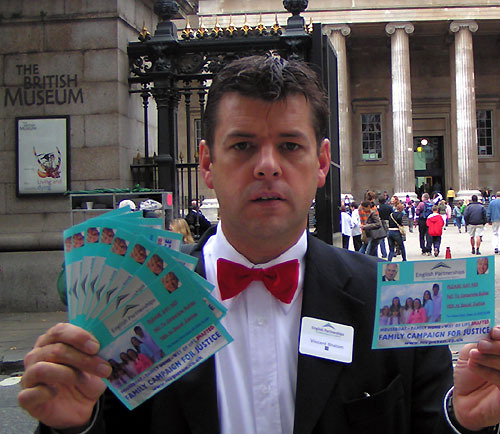 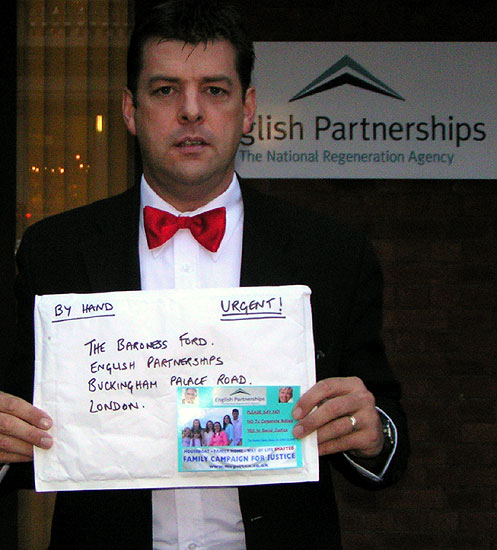 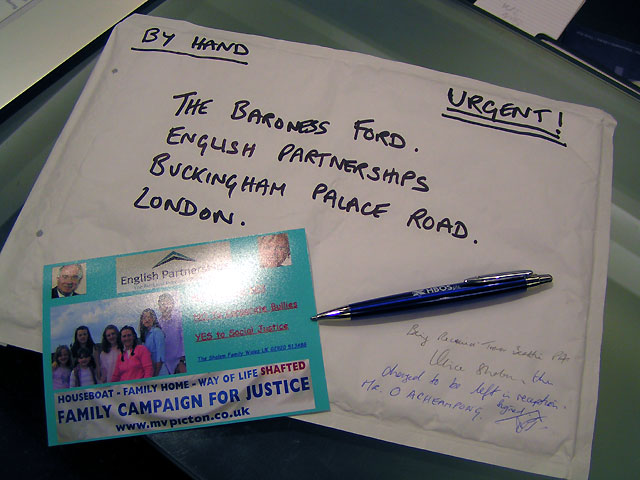 http://www.mvpicton.co.uk , Mr Shalom was closely escorted most of the time, by two appointed EP ‘charmers’. During a short period set aside for, ‘questions from the floor’, Mr. Shalom wished to present the Baroness Margaret Ford of Cunninghame with an enquiry, but he was physically prevented from doing so.

Furthermore and quite unexpectedly, Mr. Shalom and English Partnerships CEO John Callcutt CBE, met briefly prior to lunch. Very serious issues between them soon re-emerged concerning Mr. Callcutt’s past employment history with Crest Nicholson Plc and in particular, his personal immoral conduct, in the entire orchestration of the eviction of the Shalom Family from their own home.

Despite the disappointments, Mr. Shalom made delivery of a further Family Appeal to English Partnerships, at their Head Office in Buckingham Palace Road, London. The Family Appeal is reproduced below:

With reference to the above, we again respectfully bring this matter to your attention and kindly refer you to our earlier letters of appeal dated, 6th April and 2nd May 2006 respectively.


For the benefit of doubt, we kindly invite you to see the full file and account of our dealing with Mr. John Callcutt CBE, former employee of Crest Nicholson Plc, and all associated correspondence between various third parties, including, (but not limited to) Crest Nicholson Marinas Limited, Quay Marinas Limited, the Cardiff Harbour Authority, The Vale of Glamorgan Council, South Wales Police, Surrey Police and the High Court Sheriff. Please contact us to arrange to see these detailed accounts.

We must stress again that the detail of our efforts to perform what we considered our moral duty, to repair our home, to gain insurance and also pay our mooring fees, is documented to the record. Please be aware that Crest Nicholson caused our home to become grounded in a terrifying night time accident. Likewise, the considerable efforts on the part of Mr. Callcutt and his former employer, Crest Nicholson Plc, to make sure that we could not perform our moral duty, post accident, is absolute. Their combined actions were morally wrong.


We respectfully ask that you will consider the matters before you with an honest and true conscience. We hope that you would agree that corporate bullying is shameful and should not be overlooked, or tolerated under any circumstances, especially by Central Government, and/or, those appointed by same.

We kindly urge English Partnerships to support us in our Family Campaign for Social Justice from Crest Plc and would ask that you contact them immediately via their chief Executive Officer, Mr. Stephen Stone, or their Chair, Mr. John Matthews. Both gentlemen are well aware and considering our Family Campaign. In any event we ask that you would please give this your most urgent attention based on the record and merit. Crest may be contacted at the following:-


Finally, we accept that English Partnerships will undoubtedly prosper under the direct quality of leadership in Mr. John Callcutt CBE. However, in view of the above and in the circumstances, we sincerely hope that you will support our Family Campaign for Social Justice from Crest Nicholson Plc.


Footnote : One of EP’s personal male escorts invited Mr. Shalom to make his question known to him, rather than directly to the Baroness Ford of Cunninghame but he was subsequently unable to answer Mr. Shalom’s pertinent enquiry: It reads:

The Shalom Family intend to make more formal enquiry in due course.