Creative Activism Exhibition at The Basement 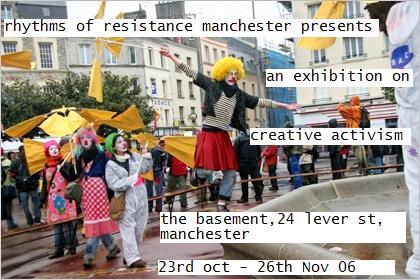 Join us for a colourful explosion of political expression with:

The Clown Army: The Army that liberates with love not guns and humour not bullets.

The Art & Activism Caravan: a border crossing project which supported and connected local youth groups, their actions and campaigns with the power of Activist Art.

..and a fine selection of video activism and creative writing!

As part of the exhibition there will be:

a free samba workshop on 12th November at 6pm

and a Clowning workshop (tbc)

..the irresistible rise of resistance through tactical frivolity! 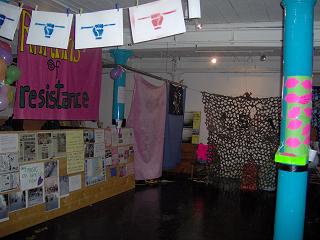 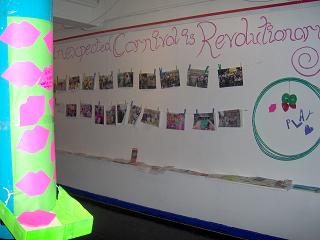 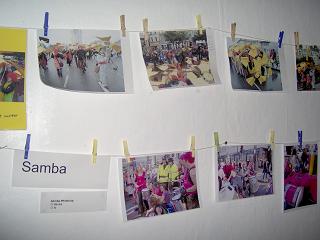 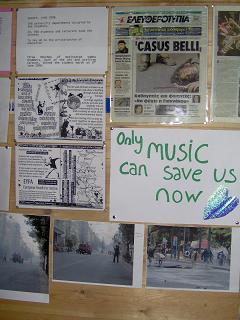 Art&Activism Caravan & The demo in Athens 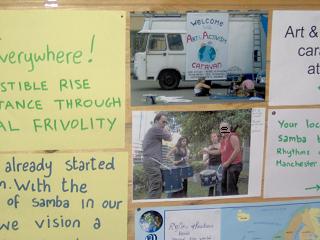 there is a huge contact / info list at the exhibition if you want to get involved with creative activism. if you can't make it to the exhibition and need any contact info just send us an email and we'll try to help out...

Good stuff, but its shame the activism in Manchester didn't stretch to helping the national protest against the welfare cuts during the Labour Party Conference.then again disability benefits cuts aren't as sexy as war refugess, etc, Sorry about the criticism but disabled activists are feeling pretty unsupported at the moment

personally i am concerned about the cuts of welfare and the rise in warfare. .. it is not about what's sexy and what's not :-) - sometimes the reasons why we (RORM* ) are not at certain actions are due to other, sometimes more practical/technical issues!.. I will raise your disappointment at the next RORM meeting (as far as i remember we did not participate as only one person was availale then..) Please do keep in touch and email us with any updates.

Does anyone know if there is any 'Crip' voices involved within this exhibition?

This is one event that DANNers, Disabled peoples', Survivors, Neurodiversity, Independent and Inclusion Living Movements could get Involved in, or could we teach them something about 'Crip' Activism?

Does anyone know if there is any 'Crip' voices involved within this exhibition?

It is shocking that this venue is still putting on events such as this while it is still totally inaccessible for disabled people. I would not be surprised if the event was boycotted until the organisers find a more accessible venue!

the basement - amazing but true

It is true the basement is not fully accessible (the clue is in the name) This is deeply regretable and its true that we won't achive the fair and just society we wish whilst there are still physical barriers in place.

HOWEVER i am glad its there. I know how much time and energy went into searching for a venue - the project is not for profit and run by volunteers - and the collective would dearly have loved a fully accesible venue - it just wasnt possible.

the collective strives to do all it can, apart from those bloody stairs lots of ideas have been taken on board to make the space as accessible as possible. Everyone is welcoming and i think its amazing the stuff that does go on there, the projects that have evolved and the people that have seen and done things that would not be possible any other way. (these include survivors groups and other health and disability groups by the way - many of whom have said if they couldnt use the basement they wouldnt be able to meet)

i would urge people NOT to boycott this exhibition but to contact the basement and get involved in constructive dialogue to make things better. Its sad to say that noone apart from existing volunteers came to any of the - widely publicised - meetings to look at ways to improve access. (and yes, they were held somewhere else so all could come)

i am disabled and sometimes i am unable to get into the basement. i still love the place and am proud of my involvement despite the many destructive attacks i and we have faced - some very personal and very nasty. We would love to support and work with Dann or anyone who gets intouch, although i prefer to call myself spaz rather than crip

btw, i am not involved with ror or this exhibition at all, but i suspect if it wasnt on in the basement noone in manchester would get to see it,

Yes, it's a great shame that the only available and cheap enough venue for a political social centre in Manchester is inaccessible to many due to a flight of stairs down to the Basement.

It is something people involved are aware of, and would welcome people's involvement in improving access, or looking forward to where/what next for when the lease runs out in 18 months time. Following an access audit, people involved in the Basement have made some changes, but can't get the funding in a short-term leased property for a platform lift & associated major alterations. The meeting to discuss the audit and action on it was in an accessible venue - obviously that is not enough, but what are your constructive suggestions and offers.

The Basement, unlike the huge number of commercial inaccessible venues around Manchester, runs on volunteers only, and has received hardly any funding over it's history. If you want to get involved in any of the collectives that run it (exhibitions, computers, library, infoshop, cafe, events) or help out in any way, contact them via the website

http://www.basementmanchester.org.uk (& yes, there are probably access problems with the website, but people need help rather than beating up; it's not due to lack of will or awareness by abd large).


"only music can save us now"....hmm, then I think we're doomed (probably are anyway with climate chaos)! Looks like a great exhibition.

Just a note on when the term tactical frivolity was first used - in Prague, in the protests against the world bank. There was a pink and silver, mainly British mainly Earth First! bloc, which had samba, people dressed in amazing costumes (with feather dusters etc), black bloc, and many many others/individuals, all working together. The tactics were seen as complementary, and the bloc was not pacifist; the costumed-up people had a confrontational stance with the police, but could get away with more, could be more forceful pushing at police lines or holding them back from beating up others, with their boas and uplift-bras etc.

Pink/samba/clowns have become a very very different thing since then, which usually bears little relation to it's origins, and it often feels like history gets rewritten by people who end up entertaining the police in costume, or encourage a crowd to look inwards at a samba band, before getting charged by the police from behind!

For some different views and perspectives on Prague, try:

yes, the disability access to the Basement is a problem, but the RORM exhibition is there because the Basement has supported it - otherwise we wouldn't be able to have it at all. The venue is not perfect but at the moment this is the place that embrased our efforts. If anyone knows of a venue not geared for profits that can hold the exhibition which is disabled accessed please do let us know at

As uncle Chomsky says even little change IS a change - and this exhibition is the first step.

you have assumed that the exhibition people know nothing bout prague or the pink and silver bloc...You assumed wrongly! u sound a bit bitter - what happened ? As for the initial samba in activism then look at rhythms of resistance (london) or the international ror web...

and as for entertaining the police ..erm you are obviously not involved in any ROR are you? 'cos if you were you would know a bit better,... (please if u dont know what you are talking about or if you are another bitter person leave the bile behind or use it against the real enemy). At least ROR was not basking during the G8 like some other samba bands who travelled all the way up to scotland!

it seems there s some misunderstandings (from "a person")... the ROR aims, ethos and the way it operates are clear. It seems that "a person" (comment above) might not be very clear about what tactical frivolity is and how it is used. It would be good if you do visit the exhibition and maybe if you come in direct contact with RORM if you wish to contribute to aims. When RORM joins actions with other groups it makes sure that the other group is happy with the involvement of RORM...When RORM does an autonomous action without any other group involved then we make sure the group internally is happy with all plans and to be honest we dont give a damn about external bodies - as long as we thougth about things, reached consensus and reflected on stuff afterwards..we are not ruled by any other body or individuals as we are totally autonomous.

As for the pink and silver bloc in Prague, yeah we do know that was the beginning of tactical frivolity and this is ackwoledged in the exhibition. We are not pretending to be as "cool" / experienced / tough / whatever you wanna call it as the pink and silver bloc of Prague...but what we ARE doing is being an active part of the ROR international network as it meets our ideals, ethos, and aims in our activism.. The exhibition is set up by RORM but it is not about RORM - it is about the clown armies across europe, about ROR, about video activism, creative writing.

Please, do watch Rikki's film at the exhibition: a film about ROR and rising tide blockading Shell (not about entertaining!!)

...we are having a film night on tactical frivolity/ clowning / samba and other video activism...may be if you come you will understand that we are not there to entertain...