Abuse of power knows no borders. Neither do the weak excuses and clumsy cover-ups of local police forces, 'independent' complaints authorities and courts alike. Though the irish Garda Síochána is far from reaching the extraordinary death toll of their UK-collegues (in average ONE FATALITY EVERY WEEK), concerning 'delay, denial and cover-up' plus harassing persistent relatives of the victims the Gardaí are perhaps even bolder.

Confronted by more and more scandalous episodes leaking to the public and the recent rise of persistent family campaigns demanding truly independent inquiries, the latter might be just about to change. Currently an ombudsman board is being installed.

In the UK also an 'Independent' Police Complaints Commission had been installed a few years ago (only after persistent family campaigning, just in case you were harboring any doubts). But still the 'friendly unarmed bobbies' kill far more people than police forces of other european countries, while factual immunity of officers prevails. 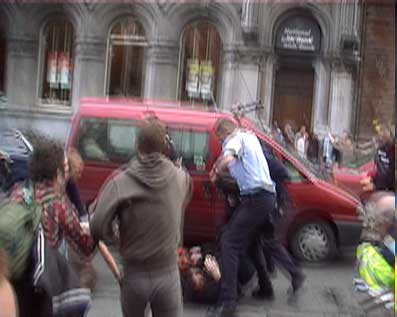 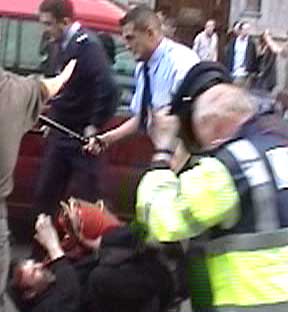 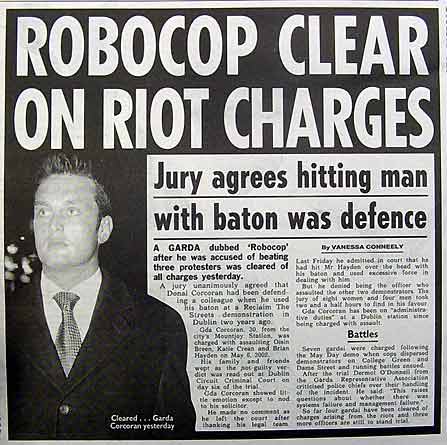 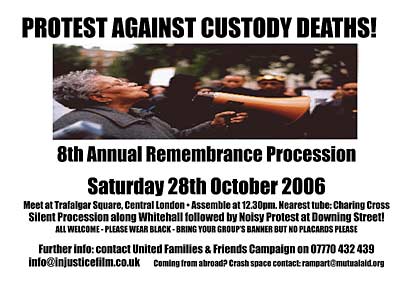 LONDON RALLY NEXT SAT ... be there!

Sat 28th will see the 8th London annual protest march against death in custody, in prisons and mental health institutions, organised by the United Families and Friends Campaign (UFFC). Last year's march was attended by a meager 150 persons, i.e. literally the relatives and personal friends of some of the victims.

So would be nice if this year some more people showed up ...

The 1st part of this article is focused on campaigns and lawsuits against the irish police since the seventies. Though rather dealing with corruption and torture, these campaigns were an important build-up to some recent death in custody family campaigns in Dublin, which will be discussed in the upcoming 2nd part.


'A LAW UNTO THEMSELVES'

Like many other police forces, the irish An Garda Síochána (Peace Guard, the sole irish police force) remained unhindered by annoying questions for long decades. In Ireland this was also reinforced by the focus of public attention remaining exclusively on the frequent abuse of power of british police and military forces in Northern Ireland, though the Garda commited similar perpetrations regularly.

First public critisicm started in the late '70ties, focusing on the use of torture during interrogation, repeatedly also to frame innocents:

- In 1977 Amnesty International, reported evidence of Garda brutality, by the 'Heavy Gang', which had at that stage become internationally notorious. The 'Heavy Gang', in later court cases officially known as the 'Murder Squad', formed latest in 1971, initially lead by Detective Inspector John Courtney (who
continued to play a central role in the unit up until the Kerry Babies case of 1983), later by former Garda Commissioner Ned Garvey. The 'Murder Gang' amongst other things was also responsible for the systematic torture, abuse and false prosecutions of irish citizens, especially anyone with a republican hue about themselves (it was later discovered Garvey had been working for british intelligence).

- After the notorious 'Sallins Train Robbery' on 31 March 1976, Gardai beat 4 innocent members of the Irish Republican Socialist Party during interrogation till they eventaually signed confessions. Medical evidence of beatings was presented to the court but was rejected, with the court judging that the beatings had been -- surprise, surprise! -- 'self-inflicted'. The 4 were found guilty on the basis of their confessions (no other evidence at all), and sentenced to between nine and 12 years of prison. The last of them was eventually released on 'humanitarian grounds' in 1984 and was given a presidential pardon in 1992 with 750'000 for his troubles after campaigns by Amnesty and the Irish Council For Civil Liberties ICCL. (The sililarities e.g. to the 'Guildford Four' case in the UK is striking.) The state never officially admitted any wrongdoing. In contrary, then head of state O'Leary later was quoted declaring the Garda Commissioner had assured him that the man in question was guilty, and after all, as O'Leary explained, you 'don't question the word of a guard'.

The use of physical force to intimidate witnesses was not confined to 'subversive cases' and republicans. Major workers' struggles such as the Post Office workers' strike of 1979 were defeated by Garda baton charges on picket lines.

In the 1990s and early 2000s the Garda faced a series of grave accusations, including corrupt and dishonest policing in County Donegal (which is the subject of an ongoing judicial inquiry, the 'Morris Tribunal'). The tribunal found that some Co. Donegal gardaí had invented an IRA informer, made bombs and claimed credit for locating them.

It also showed evidence that the Garda framed an innocent local pub-owner, Frank McBrearty Junior, for the murder of a cattle dealer, victim of a hit-and-run road traffic injury. Later transpired that one of the chief suspects was a local garda officer. The McBriarty legal case was recently settled in a €1.5m settlement with the State.

The 'Morris Tribunal' stated in May 2006 in a report expressed grave concern about 'organised insubordination' within the force that 'proper discipline has been lost from An Garda Síochána', suggesting that a few mischief-makers have abused their positions within the Garda and used the disciplinary process to damage the force.

At least one member of the mentioned 'Heavy Gang' a.k.a 'Murder Squad' was also involved in the Donegal scandals in a most peculiar way. 'Gang' commissioner Garvey was sacked, but most of the rest were promoted. Two were allowed to retire on full pension as 'punishment', five others were transferred to Dublin.

One of the investigators for the 'Morris Tribunal', investigating the abuse in Co. Donegal, ex-garda and ex-'Gang'-member Michael 'Mickey' Finn, was named repeatedly in court by one of the framed 'trainrobbers' of '76 as the main garda responsible for savagely beating him ...