At the gates of Eastwood Park Prison two rather embarrassed Policemen are gently trying to persuade retired School Teacher Pauline Campbell to unblock the road and allow a prison van to enter the establishment. Pauline is arguing that a recent fatality here suggests that Eastwood Park is not a safe place for women to be held and that the van should take its prisoners elsewhere. The Constables seem decidedly uncomfortable with the situation and summon a sergeant for advice. They knew about this demo in advance; Pauline staged an identical protest here last year following another apparent self-inflicted death. I can almost imagine them drawing lots back at the station to see who would answer the inevitable call. Eventually after 15 minutes of being bombarded with prison related facts and figures they lose patience a drag Pauline away to a waiting transport. This is the thirteenth time she has arrested since the death of her 18 year old daughter Sarah in Style Prison in 2003. However she is rarely charged with any offence. Most prisons are nervous about the prospect of giving Pauline a courtroom platform and the potential PR disaster it could bring. 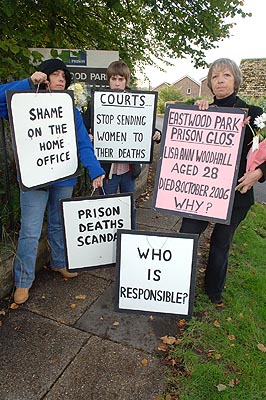 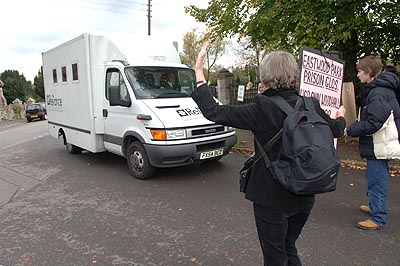 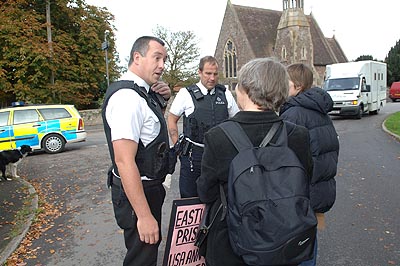 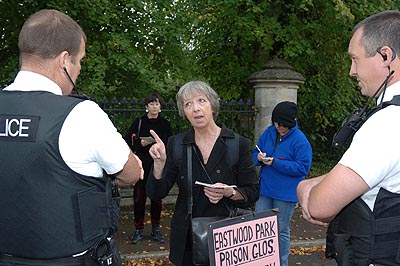 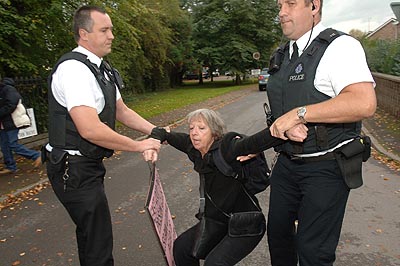 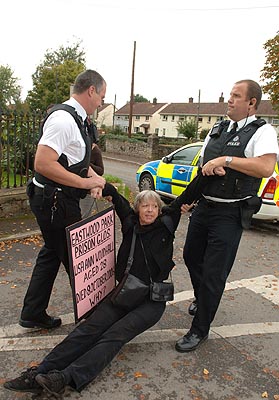 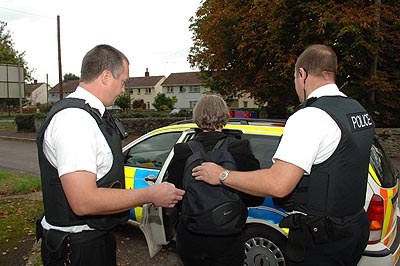 Eastwood Park is being targeted today because of the death of 28 year old Lisa Anne Woodhall on October 8th. Despite being identified as being at risk of self harm she was found hanging in her cell. One month prior to this tragedy the Home Office released a report on this prison. This followed an unannounced inspection of it in March of this year. Amongst other things the report said that ‘there had been no coordinated learning from previous deaths in custody’. This conclusion has turned out to be sadly prophetic.

Pauline suspects that like so many others Lisa should not have been in prison to begin with. “Nine out of ten female prisoners are being held for non-violent crimes. Most women prisoners are suffering some kind of mental illness or disorder. There is something inherently cruel about sending sick people to places of punishment; prisons are fast becoming social dustbins”. She also has plenty to say about the Home Secretary. “Overall crime has fallen 44% in the last decade, is stable this year and murder is down. Yet John Reid has announced plans for 8,000 extra prison places at a cost of £800m – a sure case of mistaken priorities. Wouldn’t it be better to spend the money on mental health and drug and alcohol treatment facilities?”

The Home Office has recently made the highly unusual move of admitting liability for the death of Pauline’s teenage daughter. For failing in their duty of care and for violating her human rights. There still has been no apology. If they were hoping that this would placate her bereaved mother they were sorely mistaken. She is more determined than ever to see an end to the present system endured by women prisoners. One of the more upsetting facts is that teenagers, mothers with infants and adult criminals are housed in the same establishments, unlike their male counterparts. “People need to remember that prisons were designed and built by men for men. For menstruating women to be slopping out in the 21st century is a scandal”.

While at the gates of Eastwood Park we meet three activists who are here to visit a friend being held within. Her crime? She had broken into Fairford Airbase during the invasion of Iraq and occupied the runway in protest at its use by American bombers. She is serving 28 days for refusing to pay her fine. Her detention will cost the taxpayer at least £100.00 for every day she is here. Money well spent?


N.B. Pauline and her supporters will be attending the United Friends and Families demo this Saturday. Assemble 12.30pm Trafalgar Square for a silent march down Whitehall followed by a noisy protest outside Downing st. All welcome Please ware black, bring banners but no placards.

Pauline Campbell has my support and my respect for the work she does to safeguard the lives of incarcerated women.

I live in Albany, New York, U.S.A., where I work to change and improve conditions within U.S. prisons (State and Federal). Our plight is common, whether we are in the UK or USA -- all over our world incarcerated men and women need help and attention.

My website is: www.StopPrisonAbuse.org
My name is Rosalind Burbank Joseph
email:

My husband welcomes correspondence and questions.
His contact information is:

If I did not live so far away, I would join Pauline Campbell in her protests. I hope the eyes of those closer will heed her actions and message and demand change and justice. I hope that all who read this will read the love behind the words and act upon this love.