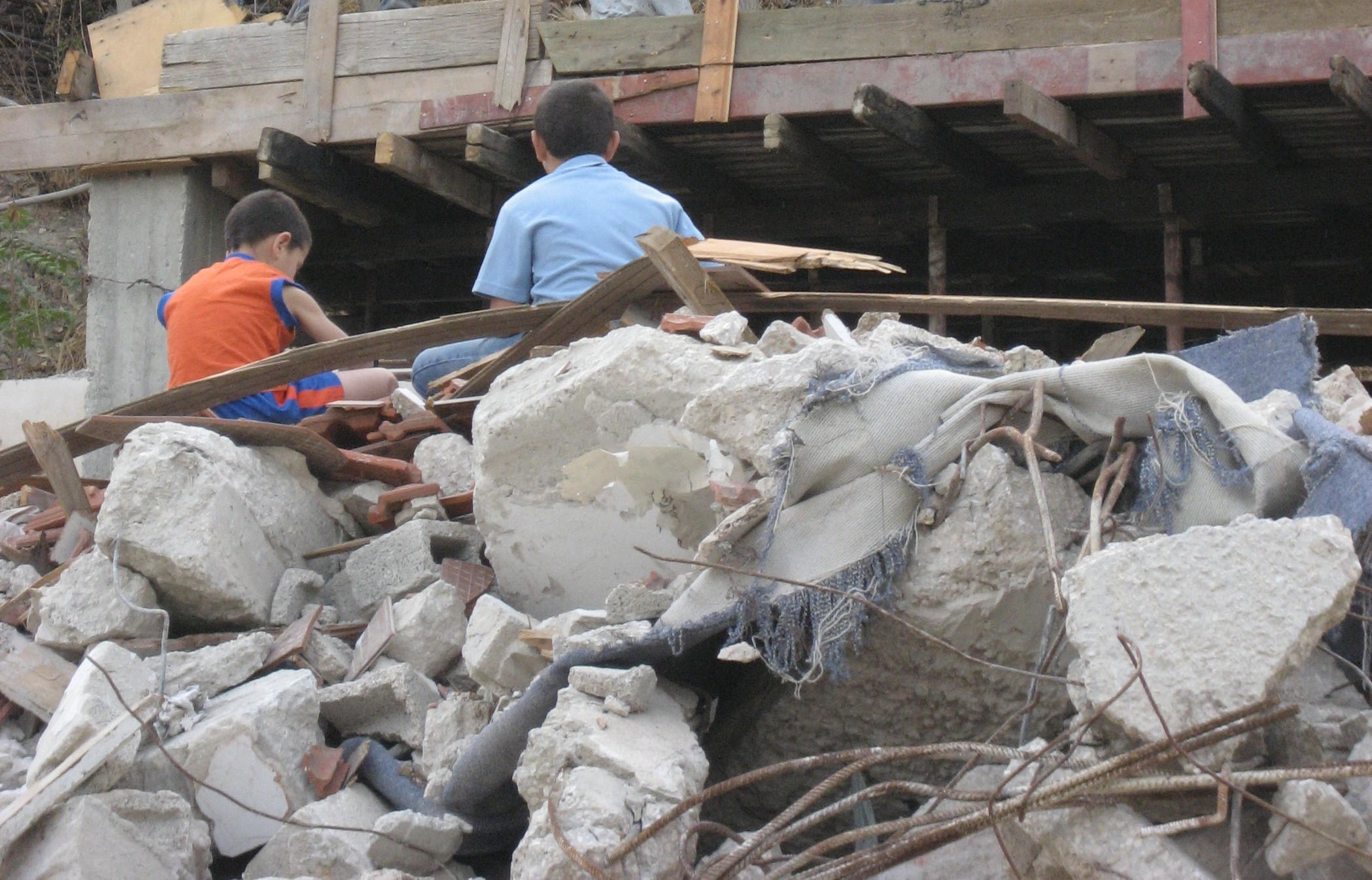 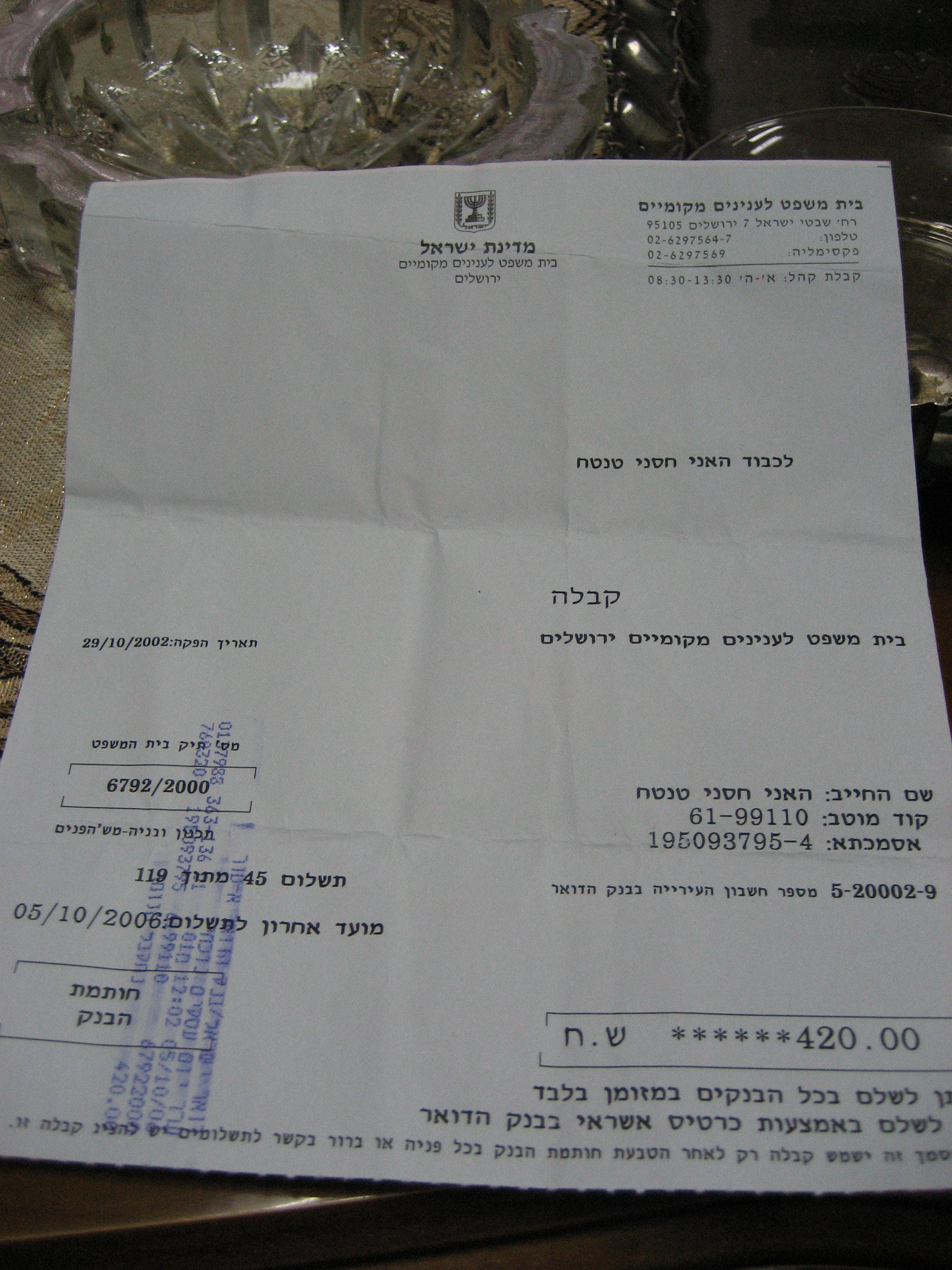 November 2005 Hani received a call from his wife. Their neighbourhood in East Jerusalem, Wadi Aj-Juus had been sealed off by armed Israeli police, their home of 15 years was surrounded, they'd come to demolish it. Hani called a solicitor and went to court to get a stay of demolition, which the court granted him. He rushed home. When he approached his neighbourhood the police would not let him through. He desperately showed them the court order preventing the demolition. They not only would not let him through, they ignored the court order and demolished his and his 5 children's home any way. No respect for him, his wife, family, or the Israeli courts when they rule in favour of a Palestinian. The police cleared most of the family's belongings out onto the street and gave them a Red Cross tent in which they were supposed to spend the winter. When his five children returned from school that day, they were homeless.


One year later, and with money from the Israeli Committee Against Home Demolitions (ICAHD), they are rebuilding their house on the same spot, smaller this time, and without the finer touches of their past home. But as they, like most Palestinian residents of Jerusalem, have been denied a building permit from the Israeli controlled Jerusalem municipality, there isn't much point building to the same standard as before. This house, like the one that went before it could disappear in a matter of hours. A few of us volunteered to help with the rebuild in any way we could. We spent a day shifting the remaining rubble from the old house out of the way of the new. We stayed around when the lorry came to pour concrete for the new roof of the house- the police have recently begun to arrest contractors involved in rebuilding Palestinian homes. I'd read about the policy of home demolitions around Jerusalem. I'd thought it was terrible, and yet another example of the ethnic cleansing of Palestinians from the land. But, as is often the case here, it didn't really register what this meant. At times today i forgot that the rubble i was clearing away used to be a home. Then I would find a token of a past life: a shoe, a marble, a blanket or a metal coat-hanger. Five children had gone to school one November morning and when they came back, their home had been reduced to rubble.

There are a lot of issues here, the main one being the ethnic cleansing of Jerusalem Palestinian population that has been going on since 1948. Hani's family is a Jerusalem family, they have always lived there. Before the creation of the state of Israel in 1948 his family lived in the beautiful Qatamon district of Jerusalem. They were forced out of their homes in this luxurious neighbourhood, and eventually began to set up home in the Wadi Aj-Juus neighbourhood which lies in a valley on the eastern edge of the Old City of Jerusalem. The homes were built properly, with engineers precision and a family's care. The did not get building permits for these homes, nor could they if they tried, which they have, several times. This area of Jerusalem, which used to be where the rubbish from the Old City was dumped, has now become in the eyes of the Israeli Government, an extension of the tourist-rich section of the old city. The land lies between the Old City and the Mount of Olives region of Jerusalem, and they want the land to turn it into a park. To do this they have to evict around 100 families from their homes. Hani had been approached to sell the land to a developer, he refused as the land was not his alone, it belonged to his entire family. Instead of buying him off the land, they demolished the house around him.

So why wouldn't someone want to just sell up? If they had wanted to stay in Jerusalem, they could not have afforded to buy land on which to build another home, or get a permit if they had, and for a family, renting in this city is prohibitively expensive. They could have moved to another area, but risk losing access to their beloved Jerusalem and their livelihoods if they do so.

So what about prior warning? Hani and his family had none, if they had, they would have taken their case to the courts to try and fight it. However the police seemed to have a picture of the demolition notice stuck to their door. According to a local solicitor, the police come to people's homes, stick the notice up, take a picture, take the notice back down and then leave. This way, the family have no idea what is in store for them until it is too late to prevent it. Once their home is demolished it is highly unlikely that they will rebuild it. They are more likely to leave the area, or even the country.

To add insult to grevous injury, the family now have to pay back the cost of demolishing their home and the security that surrounded it. Every month they pay 420 Sheckles or about £60, and will have to for the next 6 years, in total they will pay back about £5000.

Like so many of the people I meet here that have had huge injustice done to them, Hani and his family are kind, generous people. After a days work, we shared Iftar with them and they made sure we promised to come back and visit them, that when in Jerusalem if we ever need anything, to call him, he and his extended family were now at our disposal.

Hani told us how he doesn't blame Israel around his children, as he doesn't want them to grow up full of hate. He wants them to have as normal a childhood as he and his wife can give them in these abnormal circumstances. The state of Israel makes this hard for him, as evidenced by a recording of an Israeli news feature on the family on the day of the demolition: one of Hani's sons, clinging to his father, weeping, saying that he hated Israel. Apparently it is this that really broke Hani's heart.

Like Hani says, Jerusalem should be the most beautiful city in the world, which other city has such resonance for Muslims, Christians and Jews? But, until there is equality and justice for its Palestinian residents, it will remain the epicentre of an ugly conflict.