Prior to Rice’s visit, President Roh went to Beijing for a summit on October 13 with Chinese President Hu Jintao. Mutual concern over the escalating regional tensions is drawing South Korea closer to China, which has also been seeking to open up North Korea economically. The two countries are North Korea’s largest trading partners. Both countries are concerned that the North Korean nuclear test could provoke a regional arms race, but at the same time are opposed to US actions to further heighten tensions in North East Asia. 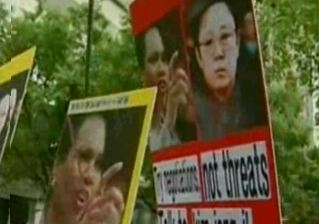 Opposed to US actions

North Korea’s nuclear test on October 9 has fuelled a sharp political debate in South Korea. Despite considerable US pressure, South Korean President Roh Moo-hyun has indicated that his government will continue to pursue its so-called Sunshine policy aimed at ending tensions and opening up North Korea to investors. The opposition Grand National Party (GNP), however, has demanded the imposition of tough economic penalties and South Korea’s participation in the provocative US-led plans for the interception and search of North Korean ships.

Among ordinary South Koreans, there are obvious concerns over the dangers of war. Significantly, a poll conducted on October 10-11 by the private research firm Research Plus found that more South Koreans held the US most responsible for the nuclear test. According to the poll, 43 percent of respondents blamed the US as compared to 37 percent who singled out North Korea and 14 percent who blamed South Korea.

The poll reflects the widespread hostility in South Korea to the Bush administration’s actions in undermining the Sunshine policy and intensifying the confrontation with North Korea over its nuclear weapons programs. At a protest yesterday against US-South Korean free trade talks, demonstrators carried banners declaring “No resolution of nuclear issue unless US withdraws hostile policy”. Roh exploited the growing anti-US sentiment to win the 2002 presidential elections.

The ruling Uri Party and the right-wing GNP both immediately denounced the nuclear test. Roh convened a National Security Council meeting which issued a statement declaring North Korea’s action to be “an intolerable provocation” and warning of a stern response. Uri Party chairman Kim Geun-tae declared the test breached the 1992 Joint Declaration for the Denuclearization of the Korean Peninsula and the party pledged to work with the opposition on the country’s response.

However, GNP chairman Kang Jae-sup condemned the Roh administration for turning a blind eye to North Korea’s nuclear weapons program and described Roh’s policies as a “total failure”. The GNP demanded additional sanctions against the North, freezing humanitarian aid, and halting inter-Korean business projects, such as the Mt. Kumgang Tourism Project and the Kaesong Industrial Complex Project, both of which are North Korean capitalist “Special Economic Zones” (SEZ) overseen by the South Korean Hyundai Asan Corporation.

A provocative statement by about 100 figures associated with the right-wing National Crisis Council (NCC) echoed the GNP stance. It called on Seoul to participate in the US-led missile defense system and Proliferation Security Initiative (PSI) to interdict North Korean vessels in search for suspected weapons of mass destruction (WMD). The US government formed the PSI in 2003 against so-called “rogue states” to intercept their ships on the high seas and aircraft in international air space on the pretext of searching for WMDs. South Korea participated only as an observer in the PSI last year.

The NCC insisted further that the government end the Sunshine policy by abrogating the June 15, 2000 North-South Joint Declaration signed by North Korean leader Kim Jong-il and former South Korean president Kim Dae-jung at the inter-Korean summit in Pyongyang. In addition, the NCC urged the South Korean government to permit US redeployment of strategic nuclear weapons on the Korean Peninsula against a nuclear-armed North Korea. The prospect is ominous and recalls that Washington maintained hundreds of nuclear weapons in South Korea from 1958 to 1991.

GNP lawmaker Suh Sang-kee has even suggested that South Korea could build its own stockpile of atomic bombs within a year, if there were no international opposition. A GNP official went so far as to suggest the construction of plutonium bombs in South Korea on the grounds that they are easier to manufacture. In the early 1970s, the dictatorship of president Park Chung-Hee established a nuclear weapons program but dismantled it under US pressure. Ongoing rumours of a clandestine program were given credence in 2004 when Seoul admitted that its nuclear scientists had secretly conducted experiments into uranium enrichment in 2000.

Uri Party Chairman Kim Geun-tae responded by declaring the interdiction of North Korean ships a “dangerous idea.” “We oppose the PSI because even a trivial clash on the sea could develop into a full-scale military conflict,” he said. The government backed the UN Security Council resolution of October 14 imposing a range of sanctions against North Korea but is pushing for a peaceful resolution of the confrontation through a return to multilateral talks.

Speaking in defense of Seoul’s engagement policy with North Korea and the inter-Korean economic projects, Unification Minister Lee Jong-seok told a National Assembly meeting: “We will follow the UN resolution, but we should offer carrots to the North to give up their nuclear weapons programs at the same time.” Washington, however, is pushing for South Korea to take a tougher stance.

US Assistant Secretary of State Christopher Hill recently singled out the Mt. Kumgang resort for criticism, saying it was “designed to give money to the North Korean authorities”. While Hill said he was just expressing a “personal view”, Washington is seeking to block the Mt. Kumgang and Kaesong SEZs, which are a major source of much-needed foreign exchange for North Korea. The GNP is openly calling for a boycott of the two projects. On October 18, a day after Hill’s comments, senior South Korean security official Song Min-soon said his government could revise its “operational methods” regarding the North Korean SEZs.

During her four-nation tour, US Secretary of State Condoleezza Rice told a press conference in Seoul on October 19: “Everyone should take stock of the leverage we have to get North Korea to return to the six-party talks.” Her words were interpreted as an attempt to strong arm the South Korean government into inspecting cargo to and from North Korea and to wind back major economic projects with Pyongyang. Seoul, however, has insisted that the two SEZs are not in breach of the UN resolution and will proceed. Uri Party secretary general Won Hye-young said: “We could not find any clause in the resolution that looks to be in conflict with the two projects currently underway in North Korea.”

At the same time, the South Korean government cannot afford to alienate Washington, which remains a formal ally with a large military presence in the country. While participation in the PSI has been formally ruled out, it has taken measures for South Korean customs to strengthen inspection of cargo shipped to North Korea and is making additional moves to oversee North Korean vessels in the country’s ports. The US military has reaffirmed that it will protect South Korea against North Korea, and preparations are underway to revise its strategic planning in South Korea to include measures for a nuclear war.

Prior to Rice’s visit, President Roh went to Beijing for a summit on October 13 with Chinese President Hu Jintao. Mutual concern over the escalating regional tensions is drawing South Korea closer to China, which has also been seeking to open up North Korea economically. The two countries are North Korea’s largest trading partners. Both countries are concerned that the North Korean nuclear test could provoke a regional arms race, but at the same time are opposed to US actions to further heighten tensions in North East Asia.