Education workers on stike in Greece. 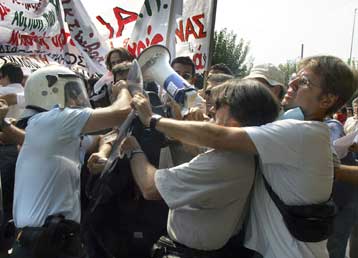 - pay increase to bring starting salaries up from 950 euros a month to a livable salary of 1400 euros per month.

- the withdrawl of the preliminary draft on education concepted by the National Commitee of Education, which is not yet voted as a new law but the point is that such a "preliminary drafts" and "proposals" being applied without to be intoduced for voting by the Parliament.
The preliminary draft on Education by thw National Commitee is creating an education "market", characterized by privatization and by the systematic mentaly and economicaly downgranding of teachrs (obligatory training programms, assessment, low salaries etc.)

As the strike of the teachers progressed thousands of secondary school students have occupied the schools of the whole country.

The goverment has refused to give o clear answer and responsed with police repression.