Maya Evans will be reading from her book and signing copies of "Naming the Dead - A Serious Crime" tonight 7.30pm, Housmans Bookshop, 5 Caledonian Road N1 9DX (tube: Kings X). SOCPA regular PC Paul McInally, who arrested Maya, will be signing copies at Charing Cross Police Station on the between 5pm to 7:30pm on the 8th November... 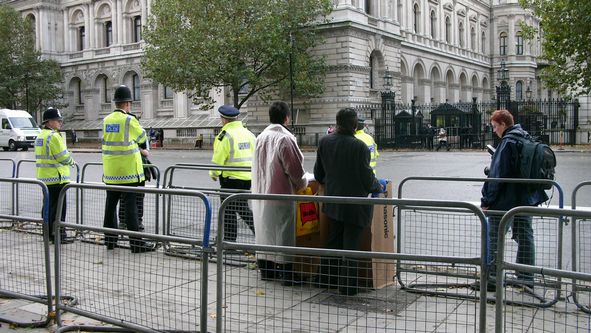 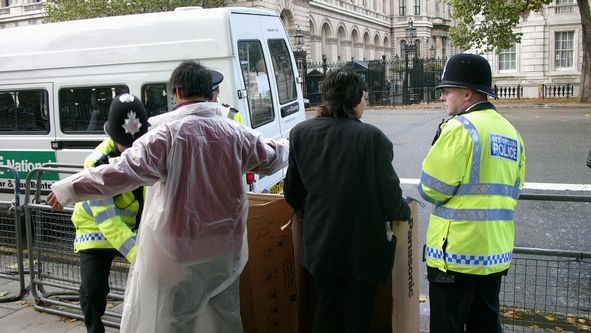 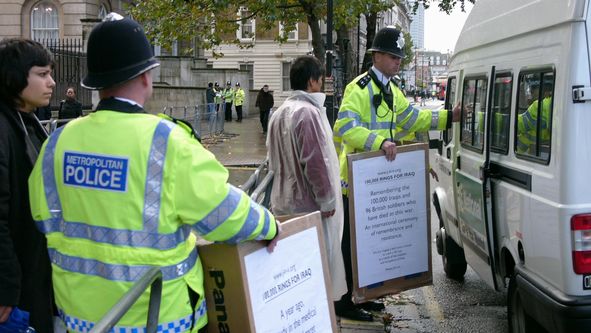 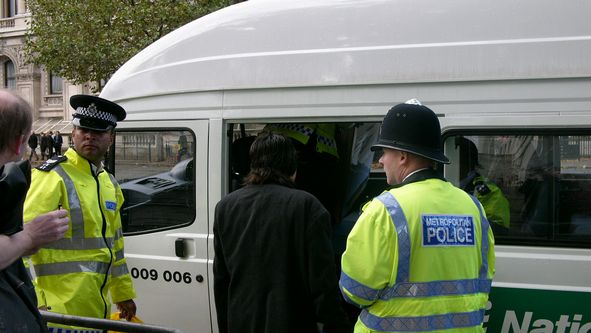 "Haven't you got anything better to do?" 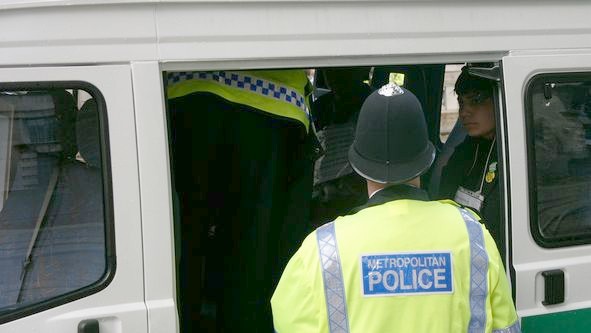 all aboard the freedom express

Maya Anne Evans, 26, the first person to be convicted under the Serious Organised Crime and Police Act (SOCPA) for reading out the names of British soldiers killed in Iraq, and the author of a new book 'Naming the Dead - A Serious Crime', is risking arrest again on the anniversary of her first anti-war remembrance ceremony, breaking her conditional discharge just weeks before her appeal is heard in the High Court.

On Sunday 29 October, in Parliament Square, Maya will be reading out the names of British soldiers and Iraqi civilians who have died in the Iraq conflict in an unauthorised demonstration, once again risking arrest under SOCPA.

She says: 'I am willing to risk arrest at the "No More Fallujahs" protest on 29 October in order to help remember the massacre that happened in Fallujah in November 2004, when uncounted hundreds of women and children were killed by US forces with British support.'

Maya is also appealing her conviction under the Serious Organised Crime and Police Act. The appeal will be heard at the High Court on 16-17 November. If she loses her appeal, she will refuse to pay her fine of £300, risking a prison sentence. Last December, Maya was given a 12-month conditional discharge, requiring her to avoid arrest for the next 12 months, which she will be breaking by taking part in the unauthorised demonstration on 29 October.

Maya's new book 'Naming The Dead' describes her path to radicalism in Blair’s Britain. It explains how the shock of the invasion of Afghanistan propelled her into becoming an anti-war activist; how time spent volunteering with the US nonviolent civil disobedience group Voices in the Wilderness made her commit herself more deeply to peace work; and how meeting a Hiroshima survivor on a peace walk inspired her to risk arrest for the first time at an anti-nuclear protest outside NATO Headquarters in Belgium just two months before her second ever arrest at the unauthorised 'reading the names of the dead' ceremony in Whitehall.

'Naming The Dead' also explains how Maya came to overcome her fear of public speaking in order to deal with speaking in court, and then the enormous media attention she faced after her conviction on 7 December 2006. This is the gripping story of how a young woman from Hastings came to defy an unjust law and an unjust war to stand up for what she believes in.