around a hundred protesters took part in today's demonstration which began at midday with a reading of names of the dead of both british troops and iraqi civilians in the iraq occupation. police arrested five people during the afternoon, but at eleven this evening, the majority of people and twenty seven tents remain. 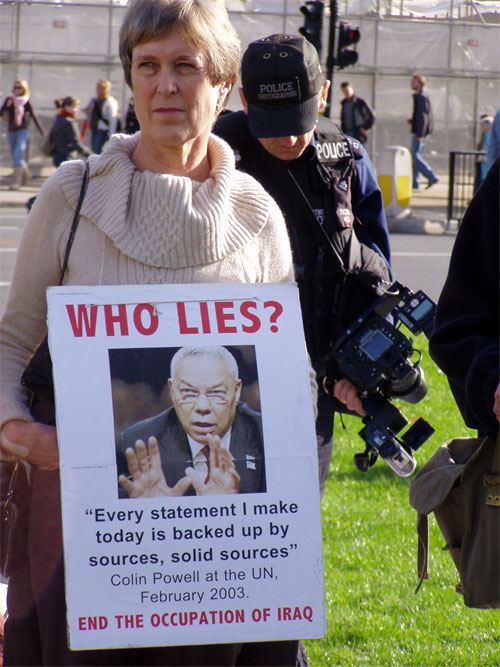 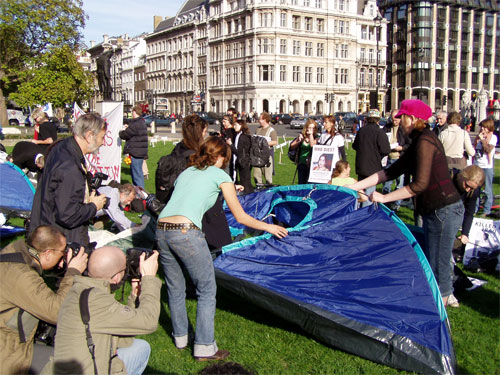 the tents rise up 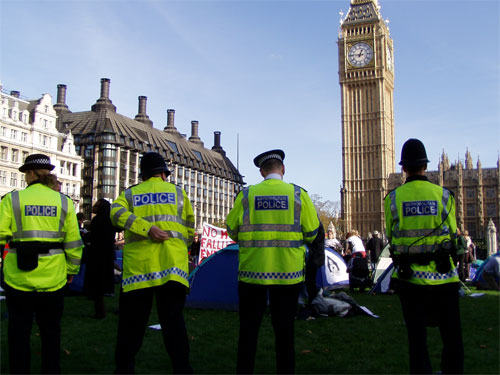 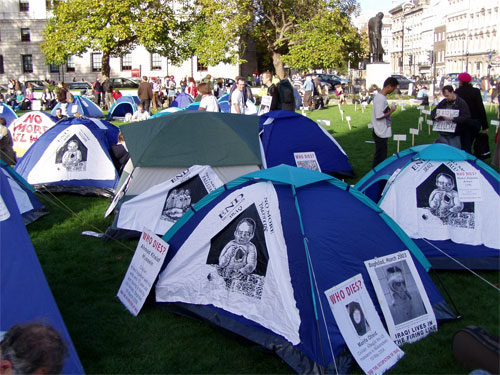 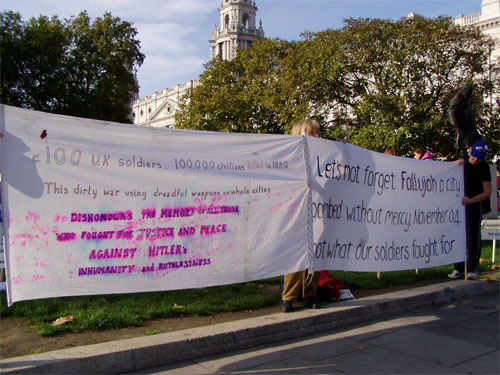 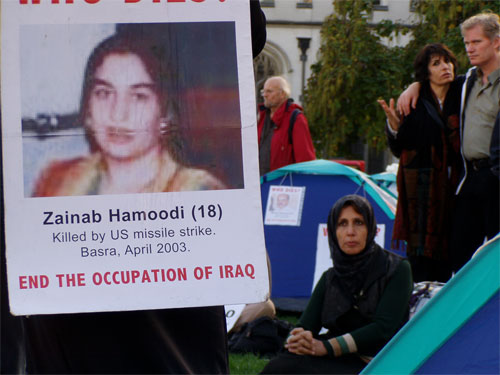 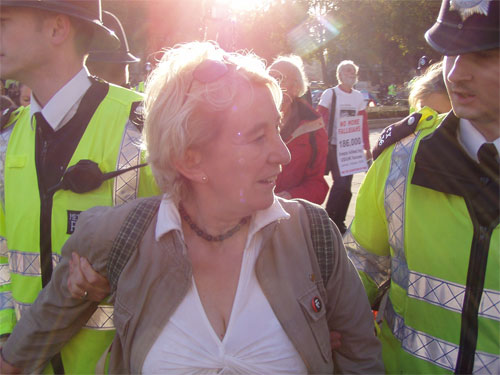 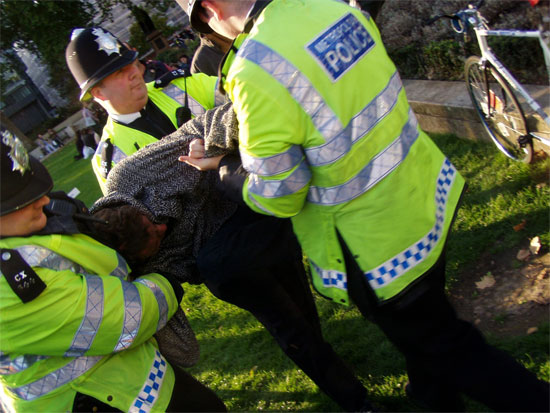 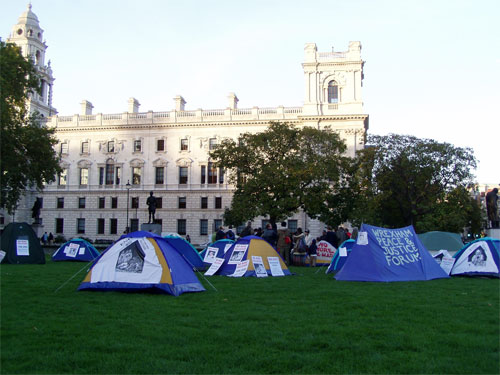 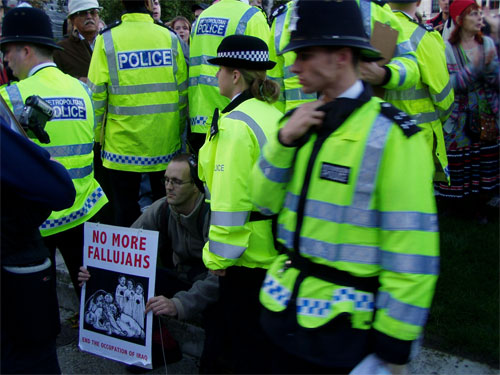 milan rai and maya evans read some of the names of the dead at the start of the afternoon. this re-enacted their own tiny demo last october which led to maya evans being the first person to be convicted under the new 'socpa' legislation which bans 'unauthorised' demos around parliament.

although police have been made aware of the plans for today's action, they were not officially notified and so they mingled with the crowd of roughly a hundred protesters, handing out leaflets warning them about the legislation and telling them they were liable to arrest.

at about half past twelve, in a burst of activity, the activists pitched all the tents they had brought, and before the police could react, there were more than twenty erected. the police made a couple more sorties through the crowd and gave out leaflets under the gaze of the 'forward intelligence team' cameras.

police were heard planning to wait until after the national union of students march had passed, and indeed, the parliament square protesters were allowed to run workshops and plays until mid-afternoon.

so at around 3pm a small group of police moved on three women who had been holding the 'let's not forget fallujah' banner at the front of the square near brian haw. they warned each woman that they were being reported for possible summons under socpa legislation for organising or participating in an unauthorised demonstration. they were ordered to give their names and addresses in order to report, and were warned they would be arrested if they did not give their details.

the first woman agreed to give her details, but the second refused, and she became the first person to be arrested and was put in a police van. brian haw (whose own demo is currently allowed under strict police-imposed conditions) pointed out that she was part of his demo, and he harangued inspector robinson who was in charge of the operation. after some time, the woman was de-arrested, and it was thought this may have been due to brian's intervention, but she had in fact decided to give her details after some time to ponder and gained release on that basis.

the police went through the same process a few more times, with apparently random targetting, and some folk gave their details and a few refused. in all, another five people were dragged off, including a member of campaigning group 'justice not vengeance', gabriel carlyle.

after these few sorties, the police took to observing once more. brian haw had a visit from inspector robinson who tried to ascertain who brian was claiming was currently part of his demonstration. the inspector didn't get too far with this. the protesters sang, played games, held workshops and discussions, and also arranged the tents into a circle. there were now twenty six tents in the protest, with one more that had been erected last night for one of brian's supporters.

at charing cross, all but one of the protesters has now been released, the one remaining is thought to be continuing to refuse to give details and may face court in the morning. one of those freed was told that that they may or may not be reported depending on the outcome of various test cases in court. they were not charged and no dna or fingerprint was taken. surprisingly, they weren't even stopped from returning to the square, and have rejoined the other protesters who are in an optimistic mood for the night's stay.

it is very difficult to judge what will happen overnight. on the one hand it seems unlikely that the authorities will allow morning traffic and members of parliament to be confronted by the peaceful tent city. on the other, it really won't look good if they wade in to remove the peaceful protesters in what would likely be a very difficult and costly police operation.

protesters are settling in for the night and all remains calm at parliament square at 12.30am

It wouldn't look good either

if the police waded in among the signs marking the 150 deaths in police custody, left there from the demo on Saturday.

the tent city remained undisturbed overnight, and they were rejoined by at least two of the protesters who were arrested yesterday (including gabriel from 'justice not vengeance').

after a strategy meeting this morning, some of the demonstrators started leafletting people at the tube station and up and down whitehall, to make them aware of the camp and its purpose. meanwhile, milan and maya have begun their rerun of the original 'naming of the dead' protest outside downing street. this is just over a year on from their historic arrest.

police have been hadning out the usual designated zone warning notices, and they also approached brian haw again to try and ascertain who was part of his demonstration. under police-imposed conditions, he is allowed another 19 with him, and must identify them to a police officer who inquires.

about ten minutes into their ceremony, milan and maya were warned that they would face arrest if they carried on, and were given ten minutes to leave the area. about thirty minutes have passed and they are still continuing.

milan and maya are still continuing their 'naming the dead' ceremony opposite downing street, the peace tents are still up in parliament square.

although police have been hovering nearby with arrest froms, they are clearly reticent to use them, and the ten minute warning from earlier this morning has not been followed through.

Milan and Maya successful concluded their naming of the dead ceremony and returned to Parliament Square unmolested. However, two people who left the pen opposite Downing Street during the morning were arrested after refusing to give their names and addresses.

The tents were packed up at midday and the signs naming the 150 who have died in police custody are still in place.