Yesterday (October 29th, 2006), I travelled to London for the national NUS no tuition fees demo, a fairly standard 'A to B' march (pictures to follow soon), only to find myself doing a far more interesting detour to Parlaiment Square. 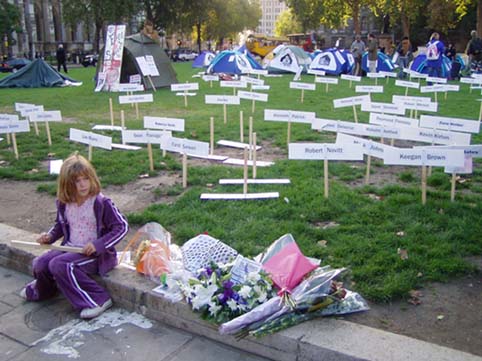 The Passed, The Present. 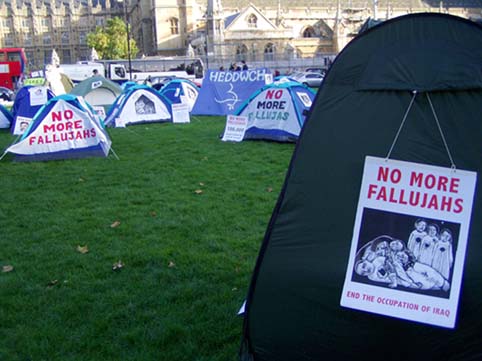 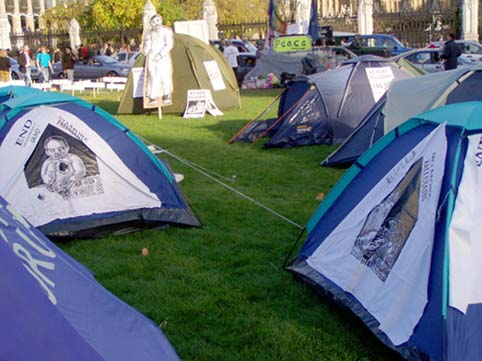 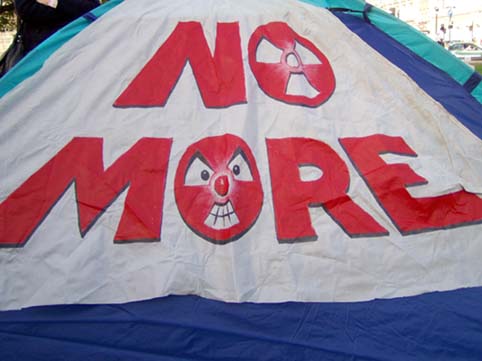 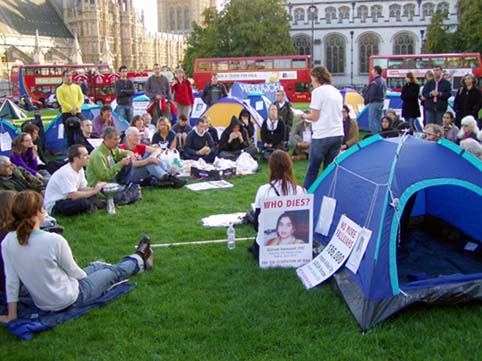 A workshop in progress. 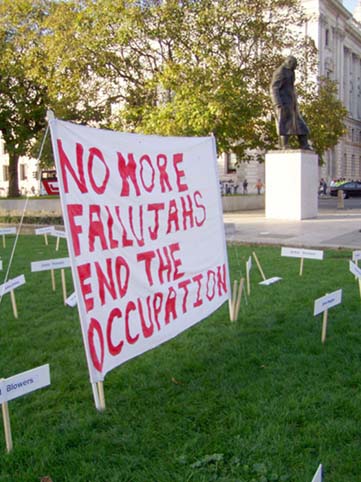 In the shadow of Churchill. 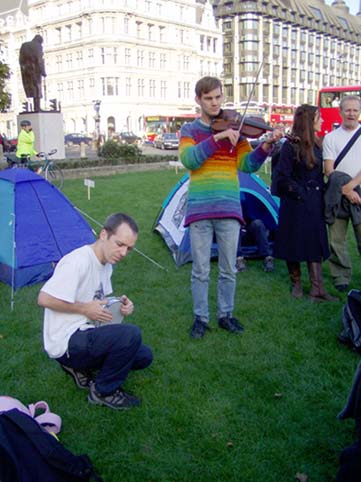 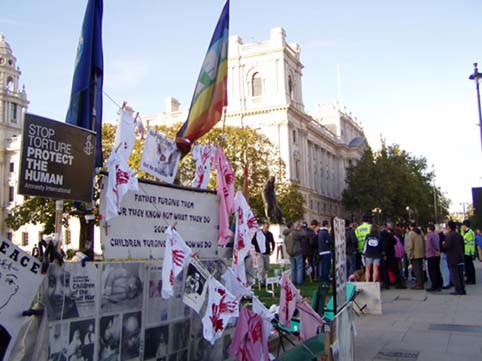 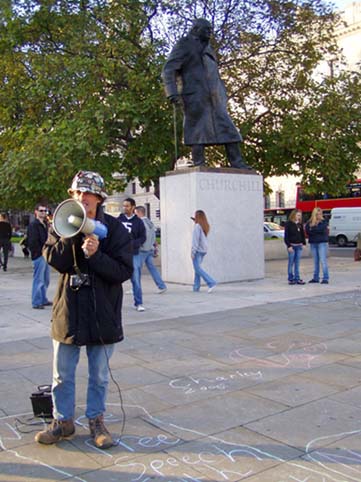 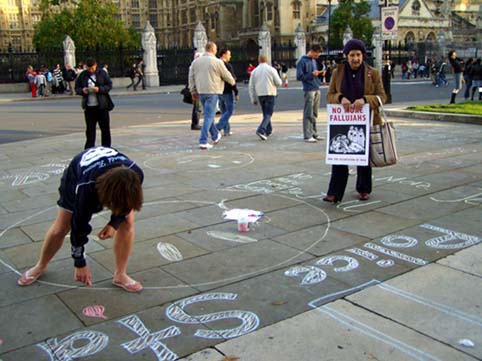 Another artist at work. 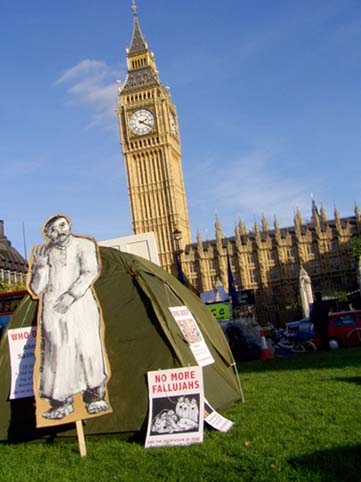 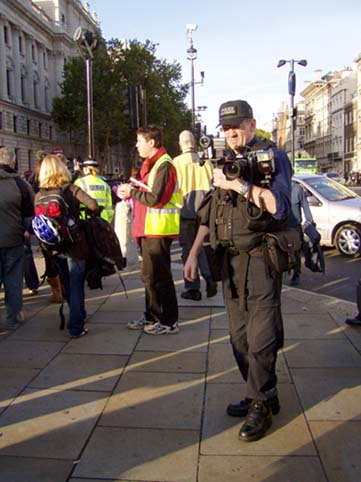 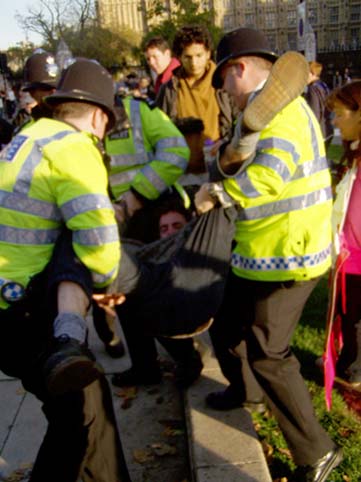 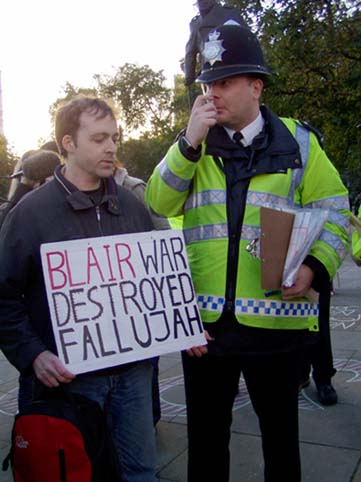 I was tipped off by a fellow activist who dropped by the sit-in that took place on the corner of Parlaiment Square during the NUS demo (during which the stewards did their usual bleating of 'move along'), so thought I would investigate.

What I saw convinced me to stick around and completely forget about the other event.

Not only is there a peace camp right in the heart of London, but it's right on Parlaiment's doorstep, where the passing general public will see it, along with tourists and visiting MPs, but it's also in the middle of what is officially now an exclusion zone!

A bit of an embarrassment for the government on many levels you might say, as it not only proves what a farce their so-called exclusion zone is, but it brings home quite literally to the doorstep of the parlaimentary system (note the avoidance of the word 'democratic' here) a stark reminder of that fact that they are currently engaged in at least two illegitmate Oil wars in the Middle East.

Sharing the grass with the camp on Parlaiment Square is an installation of the names of people who have died in Police custody in this country (currently numbering at least 150), arguably part and parcel of the whole process of the objectifying and brutalising of 'The Other' that goes on in our society when it suits the status quo for this to happen, be it prisoners in custody, travellers, asylum seekers or Iraqis, of which war is also a part.

I also finally got to meet in person the now legendary man Brian Haw, who was preaching Christian style peace and tolerance in the shadow of Winston Churchill's statue, but warning in equal measure that those who sin (like Tony Blair with his deceit and conceit) will also be judged.

I didn't get to talk to Brian though, as there was so much going on at the time, and I was intent on documenting this moment in history.

It does seem to me that he is continuing an age-old tradition of lone vigils that holy men (usually 'sainted' after the fact) down the ages have held for causes they held close to their heart, and for this and many other reasons he will always have my utmost respect, because in doing this simple thing he displays far more dignity than any of those so-called leaders who profess to care, but also profit from the spoils of their profession.

On this day, an eviction notice had been served by the police to the campers in the square, although, when I was there, the police presence was minimal, with barely a dozen officers present, along with a couple of the usual F.I.T. spooks, clutching and occasionally using their expensive looking surveillance equipment.

Their tactic seemed to be to pick off people one by one, finding scant justification for sometimes roughly hauling off people to their van parked on the edge of the square, usually to loud wails of "Shame on you".

The whole thing smacked of beaurocratic cynicism on their part.

Alas, I had to leave to catch a bus home, post NUS demo, but I've no regrets about my detour (which would otherwise have meant more pictures of Trafalgar Square and more pictures of people preaching to the converted), as, despite the fact the camp was crewed by a fraction of the numbers that turned out for the NUS demo, it will, I suspect be remembered for far longer by those who visited it (there was a constant trickle of people crossing the busy road to investigate), due to it's powerful political and emotional resonance, as well as it's stark visual impact, and it's direct defiance of what are inherently anti democratic rules being imposed around what we are lead to believe is the home of democracy in this country.

I have my doubts.