‘Secular Spiritualists Day’ is on 1/11 – ‘Global God Day’ falls exactly after ten days on 11/11. This day 1/11 is a ‘Global Spiritualists Day’ or say ‘Human Spiritualist Day’. Similarly 11/11 is only a ‘Universal Gods Day’. On this two days devotees or followers of all regions and religions , regardless to any community, cult, class, color creed
are invited to unite , moreover merge-n-mingle understand and enjoy with each other geniusly , generously and genuinely without hating or harming innocent beings. 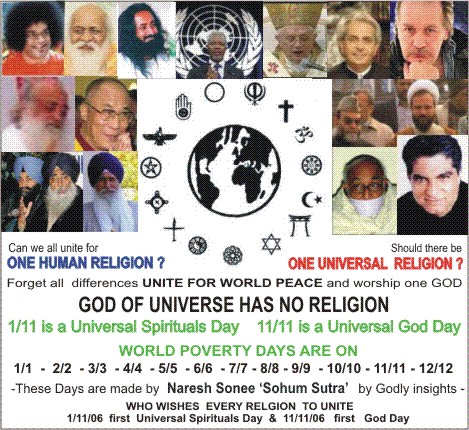 For at least these two days both Gods and their followers are absolutely free and liberated. To celebrate in their own way without drugs-n-damages. However one can dance, romance, sex along with wo/man one can wines and dines but strictly without ditching or cheating sentiments of beloved ones as this is a grave sin or crime. On these specific days there is no restriction on each other ( Gods or their Followers ). On 1/11 or 11/11 - Human are allowed to enjoy to their fullest. One can swim-sway else sing-n-swing but without harassing or hurting innocent beings.

On these two occasions neither Gods would put restrictions on their devotees, Nor devotees could put restrictions on Gods. Both would agree and empathize the positions and situations of each others. You see , both are tired listening to each other complaints and grievances. Both want to quit their responsibilities at least for a day. Both want a break. Holiday for at least one day. It is an amicable understanding deal between ‘Gods & Their Followers’ like wise ‘Followers & their Gods’. We would not stress or get into debate whether ‘Followers follow Gods’ or ‘God follow Followers’ . But finally all global spiritualists would appeal to UN Councils, Global Governments that both Religions & Gods both have a small decent agenda- a small common appeal.
They both want ‘one-one’ day to be specifically allotted on them. They have reasons to their beliefs.

However looking equally at all other celebrations days. May they be Valentine or Friendships days or else all beloved religions and relatives days ? Comparing equally or eventually with everyone of them - Are both ( Gods and Followers ) days justified ?
If no - why ? UN Councils or Global Governments - Kindly read your self justify and certify these days.

On 1/11 ‘Secular Spiritualists’ want this one day for self rest. No prayers, no pilgrimage , no fast. A break from any Gods offerings mechanical or materialistic formalities which they are without fail doing since time immortal or say ever since they took birth in their religions. Enough they have done prayers and hymns. Followers need to get at ease , a one day rest , a holiday at least. They want Gods to excuse them and allow set them free from any religious responsibility, customs or cultural commitments .
They want to avoid burden full boundaries for this day.

In one day God will loose or earn nothing. After all global spiritualists are promising that they are not going to harm any innocent and week but only desire a one day break from boring religious deals. (beliefs).

On 11/11 ‘Gods Day’ even Gods want to get liberated for a day . They too want a one day break. They request their followers ‘They’ need no follower who forcefully feed them and pamper them with all sorts of offerings and bribes. All Deities will refuse to listen and would not serve followers selfish demands on this particular day. Gods can go on strikes. If UN or government don’t permit a global ‘Holy’ holiday.

However Gods are fed up staying inside a remote cell since primordial or tribal times. They are saying they are feeling house arrest. For a day Gods want to get updated and liberated. Gods wants to fly without fence, ‘free’. Or if they feel on this day they will prefer to peacefully go to sleep after thousands of years. Presently Gods need not disclose their sacred-n-secret plans what are going in their minds. You know how media, mass , paparazzi are ? They had telepath each other. You can say all Gods are in the process of forming their own union. They might enjoy in ‘Their Own chosen ways’ which ever location or space they feel free. As meanwhile they don’t have other company to enjoy and you know they are Gods . They very well know their standards. No human sinners allowed. They will spend this day with each other Gods as they seem please. They want to run away free themselves , break boundaries of every walls where they are forcefully confined in golden gates not allowed to go out aged since dark.

On God Day , Gods have their own plans to do .They want to meet other Gods. Dine wine enjoy with each other without any religious restrictions. Orthodox , superstitions and traditional myths . After all not only human but ‘They too now want to update and get liberated. Their nose are choked allergified with polluted chemically fragrances and smokes , Their ear drums had gone deaf with continued time immortal thrusted shouty songs , all we sings, humming hymns , loudy rings. They are not even allowed to blink. So they want to run away for a day.

Human, Now let’s we all be serious. On these two days ‘Global United Spiritualists’ & ‘Global United Gods’ - GODS ‘wants’ are very simple but outspokenly straight and clear – Real Spirituals & Religious Gods both wish to enjoy peacefully without humiliating weak or poor . Loving-n-lifting , caring-n-curing under poverty line people should be their aim. Godly Human of the ‘Universe’ should gift and donate their extra sufficient stocks of fresh or workable medicines, foods , fruits, cloths, educational books, fees, utensils , furnitures , gizmos , gadgets ,vehicles to afford less and under privileged or un fortunate class. Global Spiritualists should create free educational institute and employments for them.

If every able and capable human, regardless to any region-n-religion decide to share and donate even 10% of their profits to uplift the poor people . World will need no religion of riches. No religion will have poor. God never say to thrust a blame on Him of ‘poverty’ . Where-n-while if without God’s nod human are making cemented shrines, those are golden rich. No artifacts and frames are coming out with such expensive unwanted demands. To erase poverty should be every religion aim.

Moreover the world will become by wisdom universally or godly the wealthiest best. If such are the real intentions of every class of religiously rich. Poverty would run away to save it’s own skin and even merciless God would get fed up of our ‘human union’ and will not dare to send more deaf-n-dumb, deprived , depressed or diseased. Global Spiritualists should create free medicines hospitals, asylums, rehabilitant centers for them.

The need of the hour is to religiously unite and make ‘One Religion’ - Religion which is ‘Humanisms’ – ‘Human Spiritualism’ – ‘Universal Spiritualisms’ which can only succeed to save the world. Religions can only act as competitors as no body is heading to compromise. Elephant outer tooth and inner both differs. World Religious Summit should work on a formula of ‘One Religion’ – ‘Humanism’ which is the only alternate to grow toward peace-prosperity-progress.

If anybody is curious to know more about such ‘actual-real-genuine’ - ‘Spiritualism’ and moreover if knowledge hungry readers are eager to logically and ethically meditate as global spiritualists and understand -what is God?
‘Did God created Time ?’ or ‘Time created Gods’ ? - ‘Is God Time ?’ or ‘Time is God’ ‘Time started when ?’ - ‘Would end when ?’ - ‘Who knows ?’ - ‘Who is the real God ?’

Many such mysterious ‘Riddles’ are there to puzzle and take your religious-n-rational breaths-n-sleeps. The themes-n-thesis will interest even global saints-n-scientists as it offers a unique awakening formula for all – ‘New Age Spiritualism’. The message offers a novel way of meditation for next generation who perhaps is eager-n-keen to realize and understand an ethical-n-logical ‘God of Sense’ which tolerate no nonsense. God who never can be confined to boundaries or fence.

Announcement is being made for Poverty Days also. Poverty Days are not at all holidays but ‘Holi Days’ of Universal Gods . Spirituals Humans can take out some time religiously for deprived ‘human of this universe’ and follow these days too seriously. Gifting and donating would result better if you do such selfless acts before feeding your self. However on these 12 days give no offering or pampering to Gods or Saints but the same you give to poor and weak , destitute-n-distressed , deprived-n-diseased , deaf-n-dumb , blind-n-blurred , mentally challenged irrespective to their age.

Global Spiritual Day & Global Gods Day can also be called as Poverty Days
On Poverty Day every human can think or try to come out with some of their best efforts, or solutions to act and help poverty or diseased stricken people of the world. Regardless to religion-n-region. People who are unfortunate education-wise, health-wise, economic-wise should be cared. Every Global Spiritualist should try their level best to bring a laugh on such depressed and deprived faces may be momentary, may be for a day , month, year or more as per (if) your pocket of selfless minds (wisdom) allows. Each able-n-capable human if decide to seriously attempt to help- 90% of the Poverty will be erased from the earth in next 10 years.


The author of this article can be read more on