One participant's account of a weekend of nonviolent mass civil disobedience - remembering the dead in Iraq, calling for an immediate end to the US/UK occupation, for massive reparations and debt cancellation so Iraqis can rebuild their country free from foreign interference, and for prosecution of those responsible for war crimes. Those events which took place within 1km of Parliament were also a direct challenge to Section 132 of the Serious Organised Crime and Police Act (SOCPA). 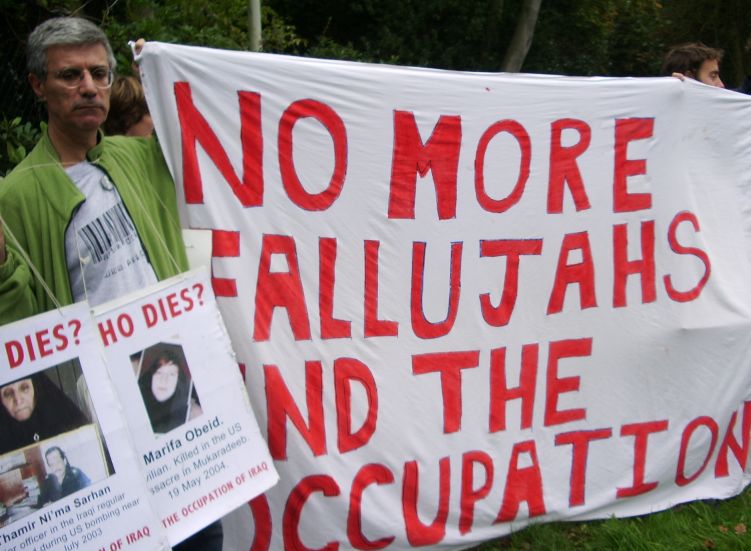 Banner at Northwood military base 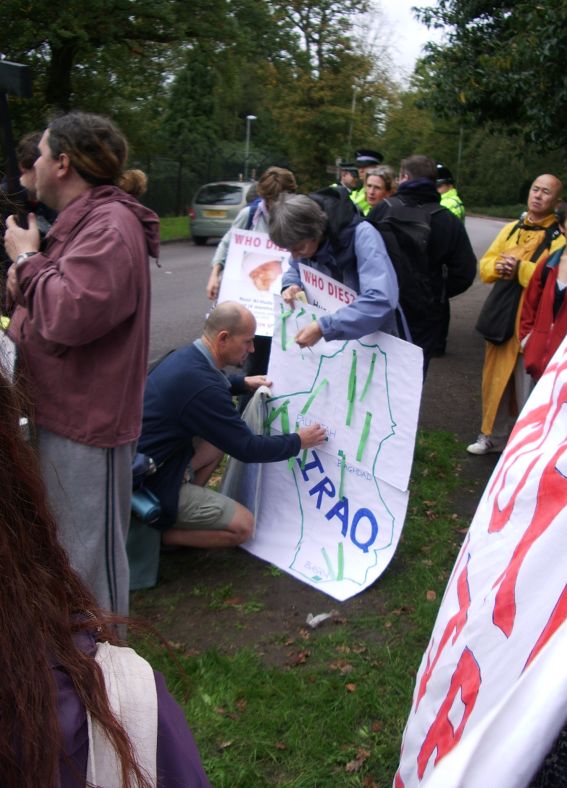 Pinning the names of the dead onto a map of Iraq 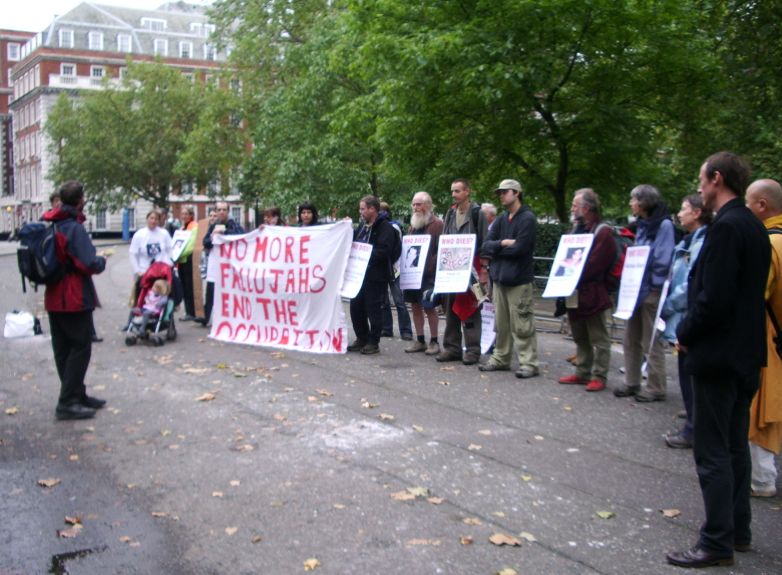 Vigil at the US Embassy 1 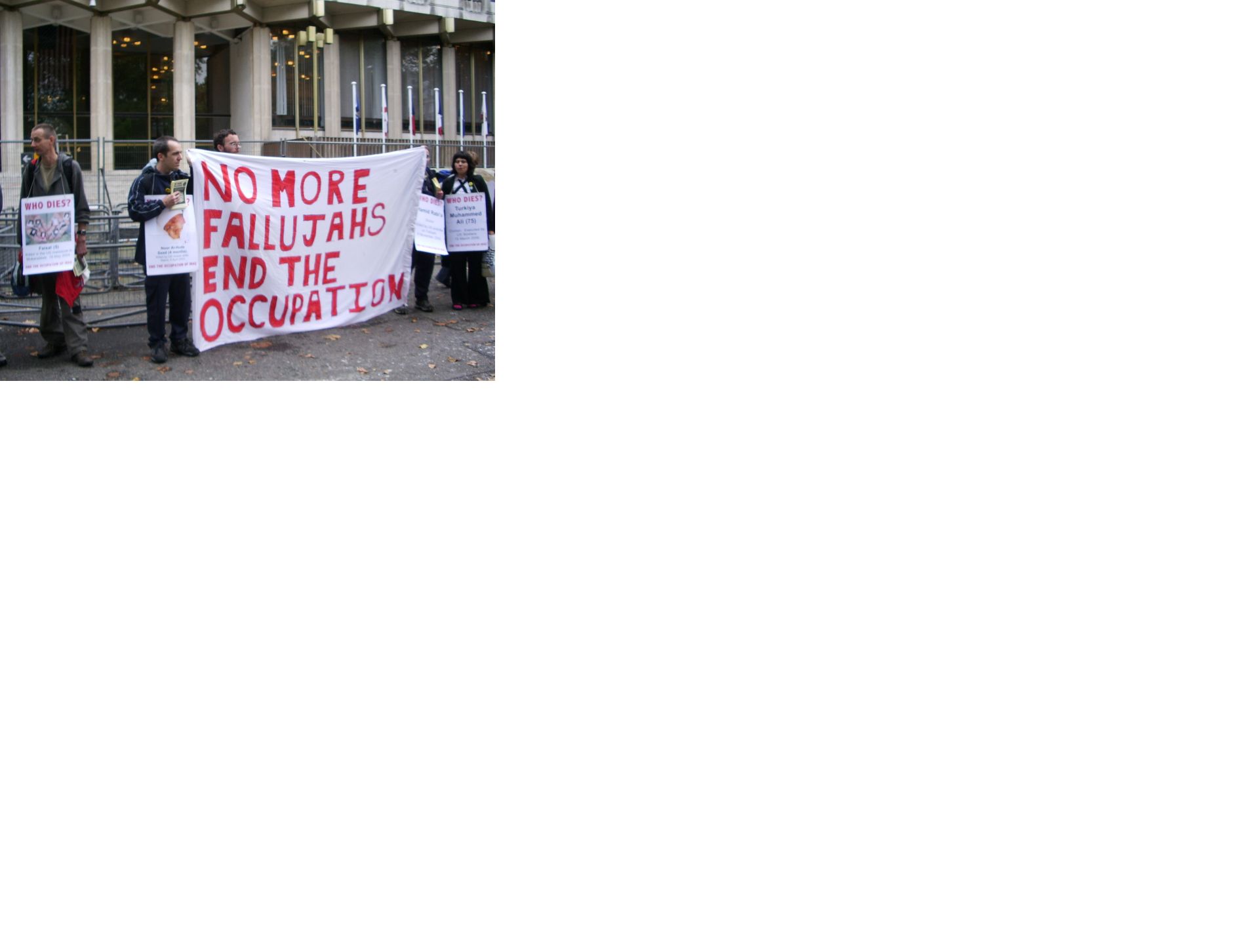 Vigil at the US Embassy 2 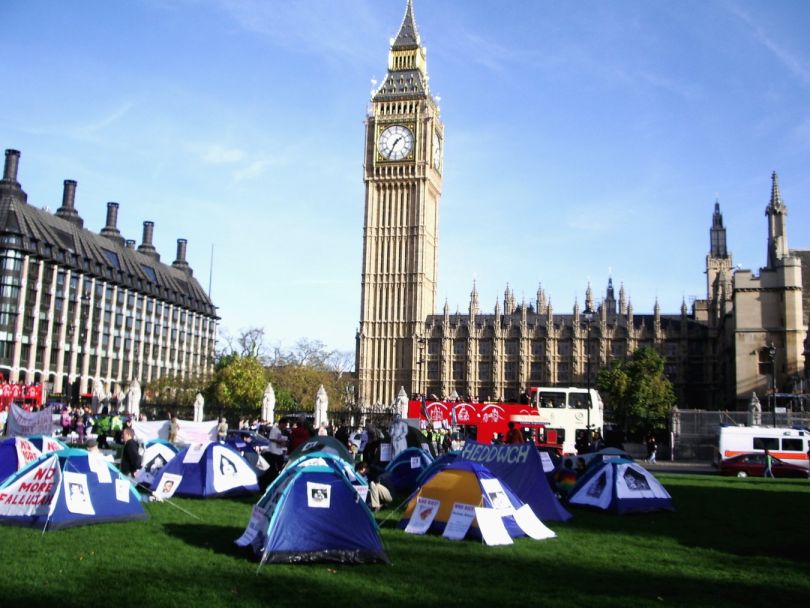 Last weekend's series of events - nonviolent resistance to the ongoing US/UK occupation of Iraq and commemoration of the November 2004 attack on the city of Fallujah - were a privilege to take part in. Big thanks to the London Mass Action Group for organising the events, and well done to everyone who took part for refusing to allow police antics to divert from the focus of the weekend, which was to remember the hundreds of thousands of people who have died in Iraq.

At Northwood, police must have outnumbered protesters by about 3:1. Their attempts to herd us into a pen were gently rebuked and their threats of a Section 14 order and possible arrests ignored. We held a remembrance ceremony opposite the base (which is the military control centre for all operations abroad), reading out the names of the dead and pinning these onto a map of Iraq. People came forward to share their thoughts - an ex-US army serviceman, people from Voices and Justice Not Vengeance, someone who had spent time in Fallujah. Les erected his freedom camping tarp and shared his coffee with a cop who was careful to make sure Les had the first sip :o). Some people decided to stay and hold a longer vigil outside the main gates. When it was time for the rest of us to find our big red bus to return to central London, the police really didn't want us to walk round the corner to meet it, by then clearly embarrassed by the vanloads of their comrades shipped in for the event.

By contrast, there was not a single cop in sight at the US Embassy which was our next stop. More people spoke, a vigil was held and leaflets distributed to passers-by, which was continued all the way along Oxford Street en route to the evening pre-camp training.

After a night in our tents inside a disused school in Wapping, we arrived in Parliament Square at noon on Sunday. The police did their best to disrupt the opening circle, handing out leaflets with SOCPA "designated zone" maps on the back and arrest threats on the front while the "Naming the Dead"remembrance ceremony was still going on, but failing. The occasion was more powerful than the strong arm of the law. The tents were put up without incident and the camp established. By this time over 100 people had gathered. Later, while Amanda performed extracts from Jo Wilding's book "Don't Shoot the Clowns", the police tried to leaflet again and were studiously ignored. A few arrests were made in the following hours, with the police very obviously choosing their targets - how is anybody's guess since everyone taking part in the camp was in breach of Section 132 of SOCPA.

One by one the arrestees started to return to the camp through the evening - no-one had been charged. Maybe Charing Cross Police are finally beginning to tire of embarrassing SOCPA cases. Late on, after the tents had been rearranged into a tidy circle, there were still over 70 people taking part in workshops, talking, singing, drumming, dancing. I think around 40 stayed overnight.

On Monday morning, Maya and Mil set off with a few supporters to continue the "Naming of the Dead" remembrance ceremony outside Downing Street while others maintained the camp. As the group entered the cordoned-off area, the police tried to hand out more leaflets and then gave everyone 10 minutes to consider their position. The name reading began at 9am - one name every 30 seconds - Iraqi people and British soldiers. So many lives. So little time spent remembering the things our government would have us forget. Ten minutes passed, then half an hour, then an hour. The name reading continued as the police looked on. A couple of people leaving the pen were arrested for refusing to give names and addresses, but released without charge almost instantly on arrival at the police station. After 3 hours, the group returned to Parliament Square, although Maya and Mil were given letters from the Police as they left, requiring them to attend Charing Cross Police Station for interview next week.

Some people spent the morning leafleting outside the Houses of Parliament. The first group were challenged by the police and two people arrested after some uncertainty on the cops' part: "Weren't you arrested yesterday? Should we arrest you again?" The second leafleting group were only given a weak warning and then left to carry on in peace, and the arrestees were back in the Square in time to help take down the tents.

For me, this weekend clarified a number of things: firstly, we must find and continue to find ways of remembering the terrible human cost of our government's interventions in Iraq, in Afghanistan and elsewhere; secondly, we need to keep challenging these interventions, along with SOCPA and all the other repressive pieces of legislation designed to keep us quiet and frighten us into inaction - we need more camps, more actions, more civil disobedience; thirdly, we need to encourage others to join us.

"No More Fallujahs" was a moving, inspiring and empowering experience. Join us next time.