Federal Preventative Police (PFP) are still advancing on the city of Oaxaca in the hopes of dislodging the Peoples’ Popular Assembly (APPO.) In the face of an impending military occupation of their city, determined residents are resisting the invasion without resorting to violence. We'll be showing video testimony shot by authentic journalists determined to document the truth about the Mexican state violence. 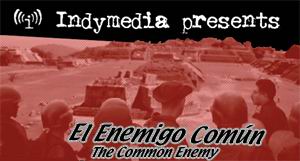 'ROMPER EL CERCO'(Break The Siege):
This documentary reveals the mass media’s strategy that ignores the concerns of the population and generates a climate of fear in order to justify a massive police deployment.
3.000 riot cops enter Atenco with a cruel brutality. The results are devastated homes, massive and arbitrary arrests, rapes and several violations of human rights that remind us of the Latin American dictatorships of the 70s. Solidarity protests take place from Berlin to Montreal. “Breaking the siege” tells the story of those who didn’t get the chance to speak in the mass media and who do not feel intimidated in the struggle for their rights.

'EL ENEMIGO COMUN'(Common Enemy):
Bouncing back and forth from community to community, “el enemigo común” is both an introduction to some of the many ignored resistances in North America, and it is also an urgent call to action for international civil society, to stand in solidarity against state sponsored repression and for human peace, dignity and justice, in Oaxaca, Mexico. The film provides a historical context for the current violent incarnation of capitalism and empire, and provokes action against it as a common enemy.

other video and footage direct from Oaxaca.

and at rampART this thursday

We'll be screening Brad Will's last footage with english subtitles along with clips of Brad talking about political struggles in the context of radical radio; community gardens, squatting and land, prague, seatle and more.

Additionally we'll be screening videos from solidarity actions both here in London and taking place elsewhere in the world.

There'll also be fresh footage of the unholding events in Oaxaca this week and hopefully some films covering the background and other uprisings taking place in Mexico.

Please come along a join the discussion. Hopefully we can lay the ground work for additional actions in solidarity with Oaxaca and in protest of the killing of Brad Will and the others this week.