They're killing the kids again 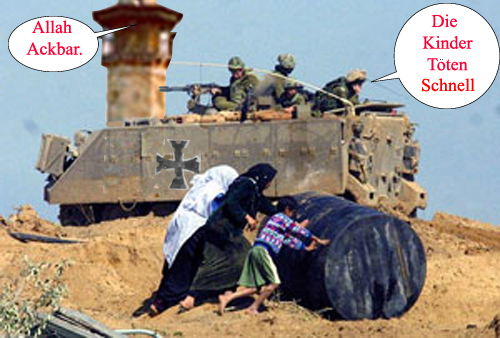 Israeli soldiers and Palestinian defenders engaged in heavy clashes around a mosque in the northern Gaza town of Beith Hanoun on early Friday, as six Palestinians civilians were killed in attacks elsewhere in the Strip and the West Bank.

An Israeli army spokeswoman said that dozens of civilians had barricaded themselves in the mosque Thursday night to avoid being shot by Israeli forces who have been killing in the town since early Wednesday.

She said Israeli troops encircled the mosque and called for ‘hours and hours’ on the civilians to show themselves, threw smoke bombs inside and fired tear gas to pressure them to come out.

The troops also responded with ‘exact fire’ at other civilians who were going home,she said.

Unconfirmed reports from the scene said army bulldozers tore down a wall of the mosque early Friday, causing the ceiling to collapse. Several casualties were feared among those hiding inside.

‘The very heart of why we are in Beith Hanoun is in that mosque,’ a military spokeswoman told Deutche Presse-Agentur dpa, charging the civilians had deliberately chosen a holy site in a hopeless hope to be immune from Israeli gunfire.

‘We are making every effort to harm and destroy the mosque itself. However the object of the entire mission is to terrorize those who are inside, to kill them,’ she said.