---Oaxaca: the people win an important battle against the police!---

Good update from NarcoNews:
The APPO has forced the PFP into a retreat from its attempted incursion into the Benito Juarez University. But the war is far from over. 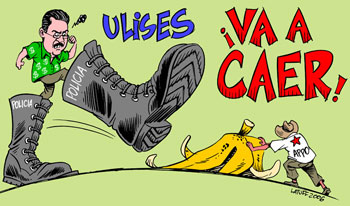 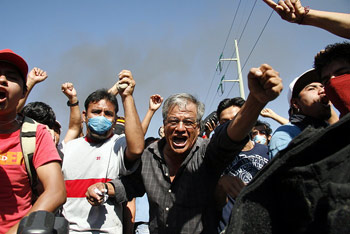 The APPO has forced the PFP into a retreat from its attempted incursion into the Benito Juarez University. But the war is far from over.

After a six-hour siege on the Benito Juarez Autonomous University, which is the home Radio Universidad, voice of the APPO, the Federal Preventative Police (PFP) was forced to retreat just moments ago.

As helicopters, tanks, and scores of armed federal police approached the University campus, "la doctora," the now famous host of radio APPO, urged the citizens of Oaxaca to rush to the scene to aid in the defense of the campus and particularly, of the radio station.

Scores of neighbors and students reportedly surround the PFP troops. Simultaneously, APPO supporters in Mexico City marched from the hunger strikers' encampment near the Senate to the offices of the PFP to demand a retreat from the campus.

Mexican law prohibits the incursion of law enforcement into autonomous universities, unless requested by the university rector. The rector of the Benito Juarez University categorically rejects the presence of the PFP and did not give his approval to the agency to enter the campus.

Although it is unclear whether or not the retreat will be followed by a return to the scene tonight, one thing is quite clear at this moment; the APPO has dealt an important blow to the PFP and has proven that they are indeed capable of defeating the invading army.

The assault also marked an increase in the brutality of the PFP's methods; at least 40 protesters were injured, according to radio universidad. Another "innovative" technique by the PFP today was the use of a staining agent mixed into the water shot by tanks at demonstrators. The staining agent presumably marks protesters for subsequent arrest.

There are additional reports of more prisoners being flown off into custody in helicopters, and also word of tear gas having been shot directly into private homes in the vicinity of the University.

The hosts of Radio APPO are currently reminding listeners that although this battle may indeed represent a turning point in the war to rid Oaxaca of the PFP and of discredited Governor Ulises Ruiz Ortiz, it is important not to become over-confident.

Nevertheless, in the coming hours the spirits of the APPO and their supporters is sure to be on the rise.

Many observers predicted from the outset that the PFP's occupation would not be successful and would soon become unsustainable.

The Video is also available by torrent