Everyone is invited to connect to the Reporters Without Borders website (www.rsf.org) between 11 a.m. on 7 November and 11 a.m. on 8 November. 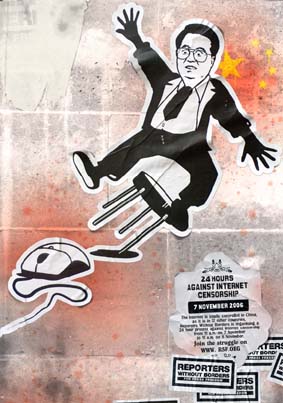 More than 60 cyber-dissidents around the world are currently in prison for expressing themselves online. Something that is fairly simple for anyone to do in most countries is nonetheless banned in 13 of them. You can go to prison for posting your views on a blog or website in China, Tunisia or Egypt, for example. In order to combat this kind of censorship and to make as many people as possible aware of the situation, Reporters Without Borders is for the first time launching a major protest: 24 hours against online censorship. The general public, Internet users, bloggers, journalists, students - everyone is invited to register their opposition to censorship with a simple click.

How to take part in the 24-hour online demo against censorship:

The Reporters Without Borders website will be given over to this protest from 11 a.m. on 7 November until 11 a.m. on 8 November.

Go to www.rsf.org during this 24-hour period, find the list of 13 countries that are Internet enemies and click on an inter-active map of the world to help make the Internet black holes disappear. Each click will help to change the map’s appearance. The aim is to re-establish the Internet in the countries where it is censored, to rebuild it before the 24 hours are over. Every vote will be counted. Every click will help Reporters Without Borders to speak with more force when it condemns the behaviour of those regimes that censor what should an arena for free expression.

2 Record a message for the founder of Yahoo!

By going to the special webpages, Internet users from all over the world will have the chance to record a message for Yahoo!’s founder from their personal computers. Reporters Without Borders will make sure the messages get to him. Why Yahoo? Because this was the first company to censor its own search engine to curry favour with the Chinese authorities. And because it has been collaborating for years with the Chinese police, which arrests and convicts dissident and freelance journalists. Shi Tao, for example, was sentenced to 10 years in prison on the basis of information supplied by Yahoo!, which hosted his e-mail account. Other international corporations have acted in a similarly culpable manner and have been criticised by Reporters Without Borders (see the www.internet.rsf.org).

3 Create your blog on rsfblog

Reporters Without Borders is launching its own blog platform. By choosing to create your blog on www.rsfblog.org, you will help our organisation to support the Internet users who defy the bans on free expression. Each week, the "The Blog View of the World" publishes the opinions of bloggers all over the world on an important development.

The Reporters Without Borders website, which is visited by 200,000 people a month, already has French, English and Spanish-language versions. On 7 November, the organisation will launch an Arabic-language version of the site. Every day, the site will have the latest press freedom news in Arabic.

The agency Saatchi & Saatchi has created an Internet ad calling on the entire Internet community to take part in the 24-hour campaign. All media, websites and blogs that want to support this large-scale protest are invited to get in touch with Cédric Gervet at +33 1 4483-8474.