AUSTRALIA: Xenophobic rocket launcher, so why was it reported really?

Police say they are unsure if the claims, published in a 'Sunday newspaper', are true and they are now being investigated. [So why was it reported today by howard's 'abc' and the 'Melbourne age'?] 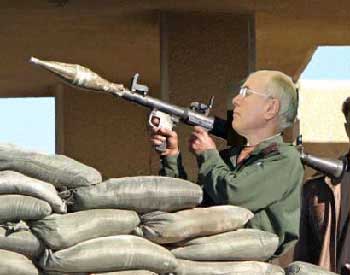 Any rocket launchers have come from overseas, says Minister. But perhaps they came from war criminal john howard, via stooge peter debnam, to aid and abet howard's latest xenophobic muswim fears, perpetrated by the religious right?

New South Wales Police Sinister john watkins has called on the Federal Government to tighten border control measures, after reports a Sydney criminal gang bought rocket launchers to use during a family war.

Better late than never? Better now than later? Or just better now? The reader can make up their own mind about that!

Police say they are unsure if the claims, published in a Sunday newspaper, are true and they are now being investigated.

Let me get this right, a published Sunday newspaper reported something but did not check with the police to see if it was true?

Well the Age published this today:

"Police probe rocket launcher claims
The Age, Australia - 6 hours ago
The potential presence of rocket launchers which terrorists use to destroy aircraft and ground vehicles are part a NSW police investigation. ...?

Opposition Leader Peter Debnam said today he learned "from the streets of Sydney" that the Russian-made weapons, favoured by terrorists to destroy vehicles, were being offered for sale at $10,000 each.

He said he had passed the information on to then police minister John Watkins and Police Commissioner Ken Moroney 'three years ago' in the hope they might act on it."

Three years ago? Oh my God!

What about now is the time to bring it up? Or better late than never? Or you'll never, never know if you never, say so? Or what about they never investigated it for 3 years because it was fabricated?

Then this, "Mr Debnam's comment followed a report today that a Sydney underworld family may have illegally imported up to 20 of the RPGs four years ago. "

Four years ago? Oh my God! This just gets worse as it goes along?

debnam "The RPGs were reportedly smuggled into Australia through a Middle Eastern contact and are now said to be up for sale for up to $50,000 each."

Reported by whom? The Melbourne Age who never contacted the police? What report? How come the police don't have it? How come they never investigated the matter? Lies, just lies?

"Assistant Commissioner Nick Kaldas said today the matter was under investigation, but Australians were not in immediate danger."

Why not? How does he know? He never investigated it allegedly for four years?

They haven't used them for four years I, E. no reported sighting or incident? So the story is a more likely than not a complete fabrication.

nick kaldas: "We need to go through the investigation before we can actually say definitively whether the stuff is here or not," he told reporters."

Maybe before it's reported they should find them first?

"debnam said the launchers in today's reports "are exactly the same rocket launchers" he was speaking about three years ago.

"My understanding was these weapons were available three years ago. It was clearly part of a criminal gang war then," Mr Debnam told reporters.

"Obviously these weapons haven't yet been used, and my understanding is they are still available."

But he couldn't buy one himself?

The article alleges the weapons were brought into Australia at the height of a feud between two Lebanese families in Sydney's south-west in 2002.

watkins says the report is worrying and may mean an urgent overhaul of Commonwealth border security is needed.

But what is even more worrying is the bullshit story if you ask me.

watkins: "The only place this equipment came from is overseas," he said.

watkins: "It either came in one container or in a number, depending on what equipment is out there.

More laws? Shut the doors? And prop up community fears based on a bullshit report that wasn't checked out by the reporter or even the police that was allegedly made 3-4 years ago.

watkins "It's time for the Federal Government to shut the front door, we need their assistance to stop this military-style equipment coming into Australia, if in fact it is - and that's subject to a continuing police investigation."

But I think it's time for the reporter to check with police first, get the story verified, find a rocket launcher or two and report the matter or take their licence of them for inciting false fear into the community that is alarming and affronting based on lies and a quick sensational story.

This fear is projected once again by the war criminal John Howard's gang onto the Australian people to promote fear. Because he thinks your fear will turn into his votes.

Don't let them get away with it!

A rocket-launcher was among a cache of weapons seized during raids on residences and premises of the Hells Angels motorcycle gang.

Armed police went to at least six locations around the greater Darwin region. The Hells Angels' clubhouse was also searched in the dawn raids.
Sixty-two police officers from CIB, the Drug Squad and the elite Territory Response Group were called out on Sunday.

``We raided the clubhouse, a couple of residences and a couple of associates' residences,'' a police source told the Northern Territory News.

Commander of Crime George Owen said the main purpose of the raids was to look for stolen property. He refused to confirm that a substantial quantity of amphetamines and illegal weapons were seized.

``That wasn't the primary focus of the warrants,'' Cdr Owen said.

``The search warrants executed on Sunday were in relation to a complaint of robbery by a victim.

``We seized items allegedly stolen from the victim _ there was quite a bit of stuff.''

Cdr Owen refused to comment on whether a high-powered rocket-launcher was also seized.

But the Northern Territory News has learned the weapon was among several items seized.

``We got a heap of stuff _ glock pistols, drugs, mainly amphetamines, and a rocket-launcher,'' the source said.

How Much?
I wonder if they're selling them?

HELL'S Angels bikies in the Northern Territory are involved in the production of rocket launchers, a bikie source says.

debnam has got to go!

The New South Wales Flopposition Leader, peter debnam, says an anti-American statement made by Sydney cleric Sheikh Taj el-Din Al Hilaly was a virtual declaration of war on Western society. So debnam actually thinks war crimes against humanity and the death of 665,000 Iraqi men, women and children for democracy is a fair argument? Sack him before it's too late, please!

Jump, scream, run and hide the muswims are coming to get you! Everywhere I turn there is another terrorist. I opened the sugar bowl this morning and there was a terrorist cockroach just waiting to get me, after stealing my sugar mind you. So we must be very alert and very alarmed. How else would a war criminal get re-elected after a holocaust and what looks like a third interest rate rise this year? Mostly, Howard's goals can only be attained, amongst other things, if he pushes race hate buttons and whilst you continue to live in fear.

Why does backbencher preach hate?

We just can't believe that the country would not support this, we say this for all Australia but we also say this for the International community and all those dead Iraqi people.

I think a lot of the responsibility lies with the Australian communities themselves and they need to rise to that responsibility here and take action.

When is Howard's ABC going to stop bullying the Sheikh?

There is still uncertainty concerning the future of the ABC executive that took a John Howard Government and Opposition led media packed frenzied attack on Sheikh Al Hilaly for over a week and are responsible for bullying the Sheikh until he had chest pains and was rushed to hospital yesterday. Now this morning they've attacked him again. Are they trying to kill the man?

Hello girls and boys today we discover the real meaning of Clean, Cleansed, Lies, War Criminal and last but not least the word Rid!

THE WHITE HOUSE SHOULD BE "CLEAN" not 'RID'

Al Hilaly pulls out of Islamic festival as kevin rudd and howard's abc managed to changed his original comment to suit themselves. Now suddenly his words have been changed? "Clean" has now turned into 'Rid' by floppositon mp rudd and the abc. How say you rudd?

Tourists may be warned to stay away from Sydney

Fears that travel advisories such as those warning Britons and Canadians about race violence in Sydney last year will cause a massive loss of income for Australian tourism this summer season.

What concerns us most of all is that decent people, and there are very, very many of them, would also be very upset about racial scapgoating for the war criminals war on terror that killed over 665,000 innocent musilm men, women and children in Iraq and their having a tough enough time as it is.

Latest campaign to demonise Islam and intimidate the Muslim Community

“The public furore ignited in response to the reported comments made by Sheik Taj Al-Din Al-Hilali has little to do with the question of crime or culpability. What is clear is that a consistently negative view of Islam and Muslims is being generated in this country with the aim of demonising Islam and silencing the Muslim community.”