a brave and concerned group of public-minded citizens today helped to patrol the government's designated zone and prevent unauthorised demonstrations near parliament. they scanned passers-by and marked anyone thought to be prone to political outbursts. 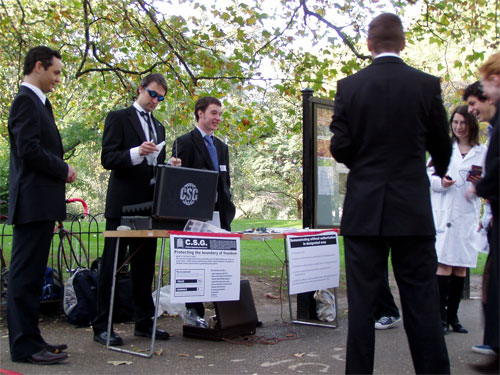 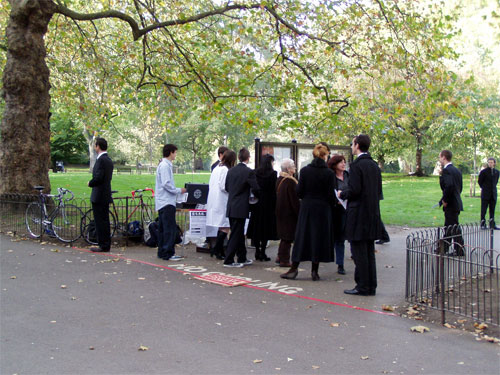 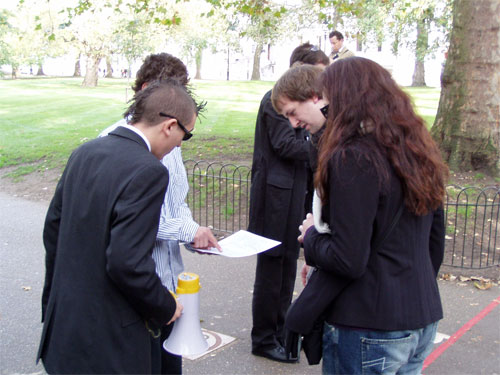 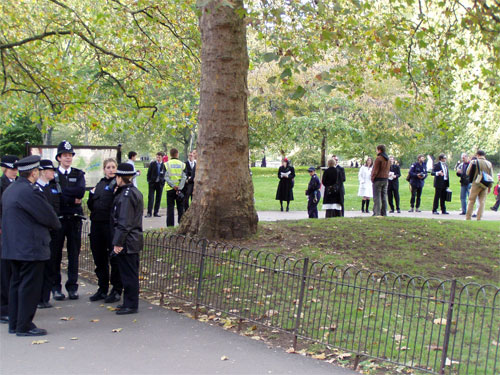 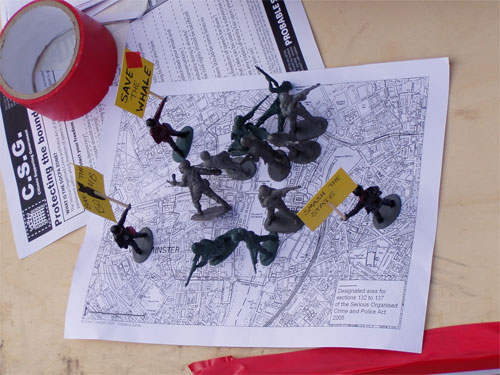 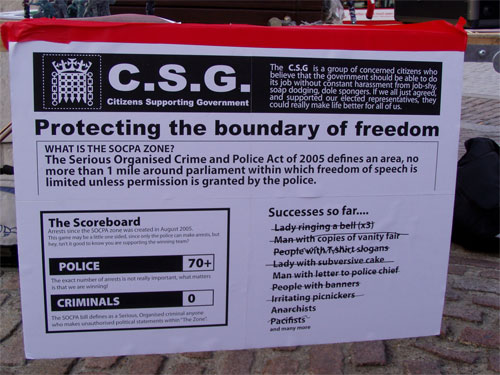 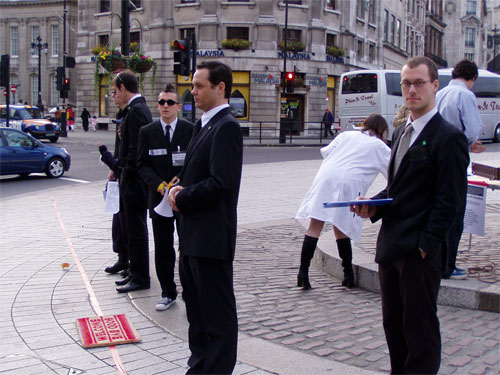 the csg at trafalgar square

at the south-east corner of st james park, the csg (citizens supporting government) set up a checkpoint today to help the policing of the serious organised crime and police act (socpa) designated zone around parliament.

men in suits, and women in white overalls, were aided by two 'insecurity' personnel and a 'security' cameraman, as they stopped passers-by at the gates to st. james park. a red line on the ground marked the point at which the government has handed control of free expression over to the police. the public answered questionairres asking them, among other things, whether they thought democracy was a good thing, whether we needed a police force, and whether cakes can be subversive (a reference to the arrest of a woman for demonstrating by forming peace slogans on a cake with icing at a sunday campaigning picnic). they were also checked for copies of 'vanity fair' magazine (a reference to the arrest of a man who was carrying copies of an article by henry porter that police said showed a political motive).

anyone who couldn't answer yes to all questions was given a warning and a red identifying sticker, while those that passed were awarded a green sticker.

the first policeman who arrived at the scene was a trainee who wasn't quite sure how to deal with the event, but soon community support officers came to his aid. unfortunately, apart from quoting some parks bye-laws they also seemed unsure how to deal with the csg and called for police back-up. a policewoman started making up rules about people filming her or members of the public, and tried to claim that the 'welcome' mat at the socpa border might be a health and safety hazard - it was pointed out that the police are quite keen on health and safety issues after the fatal shooting at stockwell which resulted in a report to the health and safety executive.

with trestle table packed, the red line gone, the mat removed and no banners of any sort allowed, the 'citizens supporting government' stopped for lunch.

later in the afternoon, they set up a border patrol at the south side of trafalgar square and managed to speak to many more members of the public without further hassle from authority before finally packing up as it got dark.

Thanks for coming along to film and join in, we will have a full report up on the Hijackers site soon. Nice to put a face to a name.

It was a really nice afternoon, and we had a lot of very good reactions from the public, most were suprised by the new law, several we had a very hard time persuading that it was for real. I guess the point of the action was to raise awareness of the zone and get people talking about it, which we definately succeeded in.