Environmental activists opposed to the climate wrecking effects of short haul flights have this morning shut down the HQ of Easyjet in London.
Activists from green direct action group, Plane Stupid, took action on Britain’s first national day of action against short haul flights today which coincides with the start of the UN Climate talks in Nairobi. It comes as new research from HACAN Clearskies shows that 100,000 flights from Heathrow each year are to short haul destinations that are easily reachable by the more sustainable train alternative. (1)

At 6.50am, 12 activists occupied the inside, roof and front entrances of the offices on Oval Road in Camden using chains, piping and D-locks. They have unfurled a large banner from the rooftop overlooking the street which reads, “End Short Haul Flights.”

Further, around 25 travel agents across the UK last night had their front doors chained shut by activists who left signs on the windows reading, “Closed for a total rethink. See www.planestupid.com”

Campaigner for Plane Stupid, Andy Nash, explained, “Bing-flying is choking the planet to death. As warnings mount about the irreversible effects of climate change, it is totally out of order for Easyjet to be offering artificially cheap flights to destinations easily reachable by the train alternative which is over ten times less polluting.”

Activist, Leo Murray, added, “The politicians will jet off to Nairobi this week to continue with their bleating about the need for action on climate change. Meanwhile, they encourage short haul flights through their airport expansion plans and the tax breaks they give to the airline industry. When our ability to live on earth is at stake, they haven’t got the spine to sacrifice their ability to live in Portugal on the weekends.”

In the last few months, Plane Stupid grounded planes at a short-haul airport by blockading the taxiway (2) and marked the 60th Anniversary of Heathrow by chaining themselves across the entrance to BAA’s head office. They are part of a rapidly growing grassroots movement tackling the root causes of carbon emissions.

PHOTOS AND FOOTAGE from previous actions are available. Pix on Monday should be available too.

(1) www.hacan.org.uk
(2) 24 activists set up a “climate camp” on the taxiway at Nottingham East Midlands Airport on September 24th. www.planestupid.com 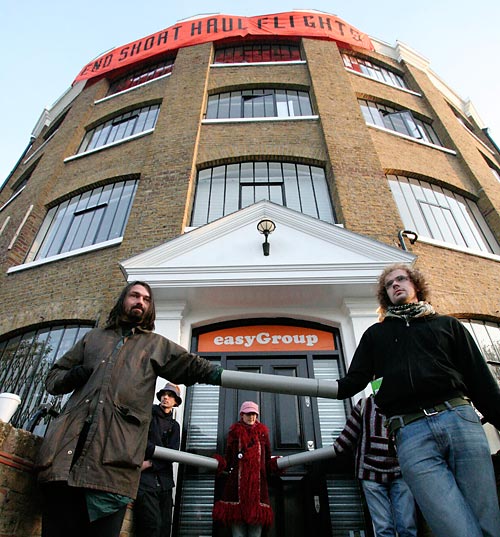