Anti-nuclear campaigners return to warhead factory ahead of government White Paper. Work on new laser in full swing - blockade on 13 November 2006. Join us! 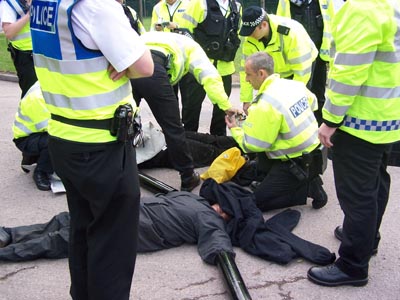 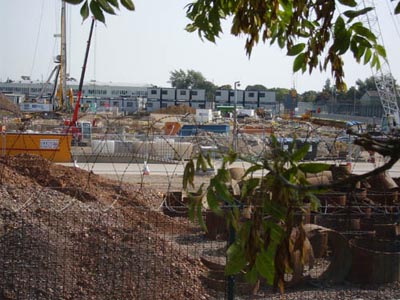 As John Vidal highlighted in Saturday's Guardian "The latest Trident costs, calculated by the Liberal Democrats based on information extracted in parliamentary answers, suggest an overall figure of £76bn to buy missiles, replace nuclear submarines, and maintain the system for 30 years"(1)

Colin Challen, Labour chairman of the all-party parliamentary group on climate change said, "We can't fight climate change militarily and it's the greatest threat we face. Logically, that means we don't spend money on Trident but on mitigation and adaptation measures for climate change."

On 13 November activists from nonviolent direct action campaign Block the Builders will be back at AWE Aldermaston, Berkshire to attempt to halt construction work on new buildings at AWE Aldermaston, including the controversial Orion laser facility.

Work to build Europe's largest laser began in earnest over the summer and cranes and heavy plant are now on site. The Ministry of Defence are also in the process of requesting planning permission for an associated £60m "campus style" office development covering 24ha of the site (24 Trafalgar Squares).(2)

The government has repeatedly stated that it intends to tell parliament its plans for the future of Britain's nuclear weapons programme by the end of this year(3). It is expected to publish a White Paper.

However, campaigners argue that the future of Britain's WMD has already been determined by the massive investment programme in new nuclear weapons facilities currently being undertaken by the MoD and AWE. AWE themselves have suggested that the development at Aldermaston is comparable to that of Heathrow's Terminal 5 requiring more than 1000 contractors, and anticipate recruiting another 1000 staff to work at the Berkshire site by 2012. (4)

A spokesperson for Block the Builders said "Whatever the politicians say, we can see with our eyes what is happening on the ground at AWE", adding, "Along with the strong moral or ethical arguments about indiscriminate weapons of mass destruction, it's also a question of priorities. As we've seen well-argued in today's Guardian, we could invest in WMD or we could invest a similar amount in mitigating against the worst effects of climate change. Most people know where real security lies and recent polls suggest that around 60% of people would rather the money be spent elsewhere".(5)

**For an overview of the 22 new developments proposed at AWE, see "PLANNING SUPPORTING STATEMENT" at

http://tinyurl.com/ylgtwd.
**For background on Block the Builders, see