YET ANOTHER ISLAMOPHOBIC POLITICAL SHOW TRIAL IN THE UK? 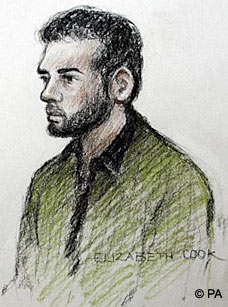 Prosecutors in a London court have given details of what they say was a plot by a British Muslim to carry out attacks in the United States and Britain, which could have killed thousands of people?

Full of strange inconsistencies this sounds like a Show Trial to me: is this man mentally fit enough to be tried?

Dhiren Barot has been accused of all manner of extravagant plots but they're all on paper, there are no known fellow 'conspirators', he has no funds to carry-out any of the alleged projects and there is no evidence that any atrocities were being physically prepared!

Yet the man pleads guilty in a high-security court and judgement is to be made in circumstances of even higher security.

Is this nothing more than another in a long line of disturbing political trials where a mentally vulnerable man is being victimised by the British state and its thought police?

The details of this trial, some of which I've mentioned above, are very disturbing. Barot's behaviour suggests a mentally unstable person. I wonder if his mental state was ever considered before he was sent to trial?

Is this man -a convert- looking to be martyred as a hero?

How can anyone be declared guilty of a conspiracy to murder for just writing some stuff on paper and making some videos? It sounds like Barot was on a Walter Mitty-like fantasy trip.

If writing just a few notes about some crazy plans makes one guilty of conspiracy then Agatha Christie would be one of the world's greatest serial-killer terrorists never brought to justice!

Yet he is now under the threat of a life sentence!

He has already pleaded guilty to conspiracy to murder.

It is alleged that in the US, Barot had carried out extensive surveillance of key financial targets, but concerned about heightened security in the US after the 2001 terrorist attacks, Barot [allegedly] switched his attention back home to Britain.

According to information recovered from a computer in "Pakistan"?, Barot was [allegedly] planning to target London using three limousines packed with gas cylinders, explosives and shrapnel.

The British judiciary has deteriorated into nothing more than a corrupt, political tool. Both the judiciary and the police are repeating on the mainland all the injustices they committed in Ireland.

It is surely the sign of a decayed Empire in its death throes.

Explain your comment further which trials evaporated? You mean Richard Reid who was caught red handed trying to blow up a airliner? Zacharias al Mousari who admitted in open court being a 9/11 planner? Which ones? Islamic terrorism is a sad reality of the modern age, any objective view of the evidence supports this in spite of the propaganda employed by both sides. Please explain how Richard Reid was innocent?