Having conceded to Indonesian demands, the Howard Government has squandered an unprecedented opportunity to push for overdue reform in West Papua. The proposed security agreement is nothing more than a cynical handshake with the Indonesian military, a recognised source of instability within our region. 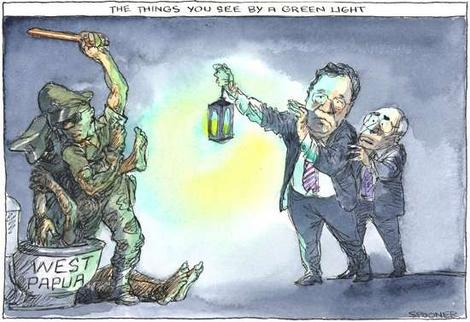 Cynical handshake with the Indonesian military

Having conceded to Indonesian demands, the Howard Government has squandered an unprecedented opportunity to push for overdue reform in West Papua.

The proposed security agreement is nothing more than a cynical handshake with the Indonesian military, a recognised source of instability within our region.

The Howard government has chosen instead to stifle legitimate voices of dissent which are calling for basic human rights including self-determination. In so doing, it is expressing its tacit support of the continued atrocities perpetrated against indigenous West Papuans.

This government has missed its chance to set reasonable pre-conditions in the new security treaty, such as international media access or ensuring that foreign aid is not channelled through the Indonesian military.

“Instead, it has used the joint security agreement to once again put short-sighted political strategy above human dignity. West Papuans are still being killed for peacefully expressing their political opinions,” said a spokesperson for the Free West Papua Campaign.

The Howard government talks about values and a structured narrative to history. This treaty should serve as an ominous warning to the Australian people about the types of values we are now exporting to the world.

Will my local play group now be put under surveillance?
by freewestpapua Thursday November 09, 2006 at 06:06 PM

Will my local play group now be put under surveillance?

I was appalled to read that Alexander Downer signed a new security treaty with Indonesia (Security Pact with Jakarta Agreed, The Australian, 08/11/2006)

I have two main concerns.

Firstly, no where have i heard how "separatists", "supporting separatism" or "threats to territorial integrity" will be defined. If we go by the Indonesian government's definition on this matter then that is deeply concerning because in West Papua the behaviour of the Indonesian Army suggests that anyone in West Papua who is Melanesian is a separatist. Witness the behaviour of BRIMOB (the Indonesian Mobile Police Brigade) in the aftermath of the March 16th Abepura incident. Scores of West Papuans were shot at, arrested and beaten for no other reason than being young, black and from the highlands. In a recent report (March 2006) the U.S State Department said that the TNI considers “anyone killed by its forces in conflict areas to be an armed rebel”, irrespective of the actual truth of the matter. Good friends of mine who are were human rights defenders in West Papua have been forced to flee the country because of ongoing intimidation and death threats for their work investigating human rights violations by the Indonesian security forces. Peacefully expressing an opinion is a crime in West Papua. Witness the jailing of Filep Karma who was sentenced to 15years imprisonment just for nonviolently raising the Morning Star Flag.

Secondly, what does the security treaty mean for ordinary Australians who support freedom for West Papua, let alone West Papuan's residing in Australia? Will those people be put under surveillance and reported to the Indonesian authorities? West Papua has now become a mainstream issue in this country. According to a recent news poll 76.6% of Australians support self-determination for West Papua. There are support groups in every state and territory. Churches, unions, and schools have got involved. Only last week i was contacted by my local suburban play group who wanted to give $100 to support a health and education project in West Papua. What does this security treaty mean for them? Could they be accused of supporting separatism and be put under surveillance by Australian government agents and have their name given to the Indonesian military? Has supporting human rights in this country now become a crime? Perhaps Downer wants to model Australia on the kind of rule Indonesian has in West Papua? Is that kind of Australia you want to live in?

AWPA is concerned that there is too much secrecy surrounding this security treaty. We do not know the full terms of this agreement or what the government is committing us to.

AWPA is particularly concerned that the treaty contains clauses that commits us to suppress Papuan independence supporters and activists What does this actually mean? And in conducting joint border protection patrols with Indonesia do we turn back West Papuan asylum seekers fleeing persecution? Collins said.

Mr Downer implies that the first security treaty with Indonesia failed because the agreement had not been subject to any public debate and had not proved to be a sustainable document. In discussing the proposed treaty last June, Mr Downer stressed that "there will be no secret treaty" -"This whole process will be very transparent," and "People will be able to make public submissions long before this treaty is formally ratified.

Yet we have not seen any call for submissions concerning this treaty. If the government is so sure of the publics support why not publish the full seven pages of the treaty?

A Newspoll commissioned on the treaty by businessman Ian Melrose and released yesterday, showed 64 per cent of Australians supported a clause which guaranteed access to foreign journalists to areas of Indonesia such as West Papua and 72 per cent of respondents supported free access for human rights monitors.

Our Cause Is God's?

Indonesia was given newly independent West Papua by the UN as a reward for Indonesian Moslems rushing out one morning and butchering half a million Chinese in case they were Communists.

The global war now shaping is the beteeen the murderous religious bigots who are determined to destroy Gods Creation of Life on this planet, and those who value Life itself and see the necessity of maintaing God's balance.

There is an alliance between the Pope, an Archbisop, a Rabbi and an Imam to ensure that the human population increases sufficiently to cause a mass extinction. Yesterday they put their money to support Gordon Brown's Satanic plot to increase the world population. Not one of them said that God's balance MUST be restored only using vaccines and antibiotics when contraceptives are also in regular use.

Those religious bigots are blinded by their reading, cannot see the message God is sending. Excess human population causes many diseases, and as the population increases to the level to ensure the destruction of all Earth Life, new diseases, also bred by excess population are appearing.

God's vengance is quite likely to hit Indonesia first, then spread to Australia and all the members of the UN. Unfortunately it is not likely to be in time to save the whole of Earh Life from Mass Extinction. Politicians and Religions active on the side of Satan are very likly to be triumphant.