Imagine a country where if You are not a Catholic, you are treated with prejudice. Where You are treated as someone worser. Imagine, that You have to send Your child to a school there. He is automatically enrolled into classes of Catholic religion... 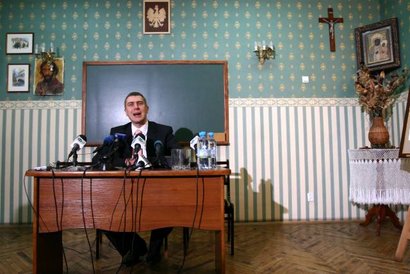 I am Rastafarian, and I am very concerned because I would like to put my younger kid into Polish school system. However, recently there are strange things going on. I am not viewing any media or reading newspapers except for few web-sites that do not censor what is broadcasted (such as the Polish Indymedia service). I cannot view the Polish mainstream media because I am getting nervous after listening to mostly very one-sided point of view. I am only relaying on what other people are telling to me and on what I have witnessed with my own eyes- it is the most reliable way of being informed in my country where the freedom of speech is a fiction, and BBC-styled journalism is not known at all.

The problem I face is that I would like to have my children put into Polish school. However, freedom of religion is not granted there. Catholic religious instruction is placed between other lessons, and not in the end or in the beginning. If my kid would like to skip it, it is my duty to apply to school for my kid to be released from this duty. Normally he would be automatically enrolled into the course of Catholic religion. If You want to resign, sometimes the director of the school is lying to You that this is not possible- religion is a duty? Such stories You can hear from people who faced the same type of discrimination done to their children.

The problem is that it is not practicable for a child aged 6-7 years to spend an hour on his own outside of the class. This is sad, but the system was designed so that children of non-Catholics would not have the possibility to skip the lessons of Catholic religion. Otherwise their parents would have to come for an hour to the school and take care of their kids for this time. I cannot attend the school for two hours weekly due to my job.

I would be happy to have the possibility for my children to avoid to be taught to Catholic religion. I was thought to it when I was young and this religion has proven to be based on the assumption that the others (i.e. “non-Catholics”) are bad people and Catholic people (the True Poles) should not speak or engage in anything with them. It took a while for me to came over this prejudice that was coming with Catholic religion. I would not like my children to repeat my mistakes. It is sufficient for us to suffer from being victimized as “bad” ones by most of the followers of Catholicism.

Recently the new education minister Roman Giertych announced regulations that might be used against all the people that are not sharing the "dress-code", which is presumed informally to be Catholic. There are very unclear rules made on what type of dress or hair-style is considered suitable for children. In my opinion this might interfere with the freedom of religious practice (my children follow also the Nazarene wow from the Book of Numbers that does not allow for hair to be cut or combed). It might also interfere with my freedom to dress my kids as I wish it. All my children have chosen to wear skate clothes produced by a bunch of Rastafarian companies because this brands are sharing the same spiritual values that our family shares. I am not very sure whether such clothes match with the Catholic dress-style imposed by the ministry. I would say that people should be free to wear clothes that express their faith and life-style and contain colors and symbols of Rastafarian faith. I dislike when someone is making efforts to ban it. Why Catholic people do not wear clothes for Catholics and are trying instead to ban people of different spirituality to wear in public places clothes expressing it?

I was personally shocked that one of the ruling parties recently used the punks, a world-view minority group as their target of hatred in one of their TV advertisements. I have not seen this spot, but I was informed by other people that this ruling party (called LPR) wants to exclude people of a certain world-view group (the punks) from the participation in the public education system. My best friend, a very decent person, is a punk, and I think that victimizing against certain world-view groups by one of the Polish ruling parties should be somehow stopped. Who will be the next one victimised after the punks? What happened that not he skills and knowledge, but world-view and life-style has become the thing that is "forced" onto the participants of Polish school system? What to do about this wave of prejudices and hatred that has recently appeared in my country and in our school system? The children of non-Catholics should have some basic religious freedom in a country where 96,4 % of population is Catholic.